The game of baseball has entertained and dazzled fans with spectacular grand slams, triple plays, and dramatic 9th inning rallies for over 150 years.

It has not only been a great way for families and friends to spend a Saturday afternoon, it’s helped Americans get through historically difficult times, like the Great Depression and World Wars. From 1942 to 1945, for one group of Americans in particular living within the fenced confines of the Gila River Relocation Center (GRWRC), the game of baseball was not just a game for recreation, it was a symbol of hope for a better life.

In honor of the 13,348 Japanese Americans who spent years of their lives living behind the barbed wire fences of the GRRC, a history kiosk was unveiled during a Jan. 21 dedication at Nozomi Park, in Chandler, Ariz.

The dedication was filled with dignitaries from the Gila River Indian Community, Arizona Diamondbacks, Nisei Baseball Research Project, the City of Chandler, and former GRWRC internees.

City of Chandler Mayor, Jay Tibshraeny, opened the dedication by giving some background history on the GRWRC and the importance of remembering the United States’ past mistakes.

“75 years ago, on February 19, 1942, President Franklin D. Roosevelt signed the now infamous Executive Order Number 9066, that led to the incarceration of over 120,000 Japanese Americans,” Tibshraeny said. “It is an important time to memorialize this difficult part of our history, [and]…this exhibit will preserve and bring awareness to this important part of our country’s history.”

Representing the Gila River Indian Community, Paul Shorthair, GRIC Land Use Ordinance Officer, said Japanese Americans and people of the Community came together during difficult circumstances and it was important to remember those times in order to not repeat the mistakes of the past.

“[The kiosk] provides a thread to the fabric weaved back in history,” said Shorthair. “That fabric was unfortunately weaved of racial prejudice and conceived in irrational thought. In 1942 the destinies of our two people were brought together, and together we relied on the land and its resources. Despite the circumstances, we not only survived but we thrived and that is exemplified by the kiosk and in the accomplishments of our community,” he said.

“I hope that this kiosk will not only serve as a reminder of past mistakes but also as a reminder to not repeat history,” he said.

Former Nippon Professional Baseball infielder for the Hiroshima Carp and GRWRC internee, Kenso Zenimura, talked about his time living in the internment camp and how he helped his father, Kenichi, build a ballpark outside the barbed wire fences of the internment camp.

“In Arizona, in the camp over here, I helped build with my dad, a ballpark outside the barbed wire fence,” Zenimura said. “As we built that park and leveled it out, I told my dad ‘You know, they are going to make us tear down this ballpark,’ and surprisingly, when we played the first game, the camp director came out to throw out the first pitch, and ever since that time I would say ‘Hey, this is OK.’”

Zenimura said they continued to work on the ball field, leveling the ground and smoothing out the stone-filled earth.

“We put more work into it,” he said. “To build that ball park, it took a lot of time. We [were] trying to level the ground.”

“You know, in Arizona in the Indian reservation, there is a lot of pebbles and in order to level that ground we would scrape the dirt, it was just like looking for gold,” Zenimura said. “[We] would rake it into a pile and my brother and I would screen it, take the good dirt and put it in the infield. The pebbles we would put outside, in fact, the pebble itself was put into the grandstand that we had built for the people [who] would come and watch the ball game.”

He said that one of the main difficulties of keeping a well-groomed baseball field in the hot and arid desert climate was getting water to the infield grass. Kenso and his father, along with other internees, dug a trench from the laundry room of their internment camp all the way to the baseball field, which was located outside of the camp’s fences.

“I noticed that even in the night time, my father used to get up and go move the sprinkler to wet the field,” he said.

Kerry Yo Nakagawa of the Nisei Baseball Research Project and grandson of former internee and actor, Noriyuki “Pat” Morita, said 70 percent of the country is still unaware that Japanese Americans were interned in camps during World War II and the kiosk is a way to help educate the public.

He said his grandfather, Morita, who is well known for his characters Arnold in Happy Days and Mr. Miyagi in the Karate Kid movie series, was just 11-years old when he was interned in GRWRC. Nakagawa and Morita visited the Community in 1998, where they met with Gov. Mary Thomas and visited the Japanese Interment Camp monument located in District 5.

“I know that 21-years-ago, my god poppa, Noriyuki “Pat” Morita…[and] Kendo Zenimura, we went back to their former home,” said Nakagawa.

Pat said, ‘Well Governor Thomas, you have nothing to apologize about, the government forced us onto your land, you had no choice’ and she said ‘But Pat, for the last 60 years we have carried this burden that we should have said no, and we didn’t, and so on behalf of the [Gila River Indian Community], [we] are very sorry this happened to your community,’” said Nakagawa.

“I never saw a connection between Japanese Americans and Pima Indians until that point,” he said. “I was so inspired by Governor Thomas’s talk, and to see how we truly are connected, no matter what faith we belong to, what ethnicity we belong to, we are connected through humanity.”

The 5-sided kiosk is located in the center of Nozomi Park and describes the beginning of American and Japanese hostilities during World War II, starting with the bombing of Pearl Harbor, the execution of Executive Order Number 9066, the experiences of those living at the camps, and their life after incarceration.

The park’s name, Nozomi, means “hope” in the Japanese language and represents the hope the game of baseball gave to the interned Japanese Americans. According to the kiosk, the baseball field the Zenimura family built brought a feeling of normalcy to the thousands of Japanese American internees, giving them hope for a better life and future. 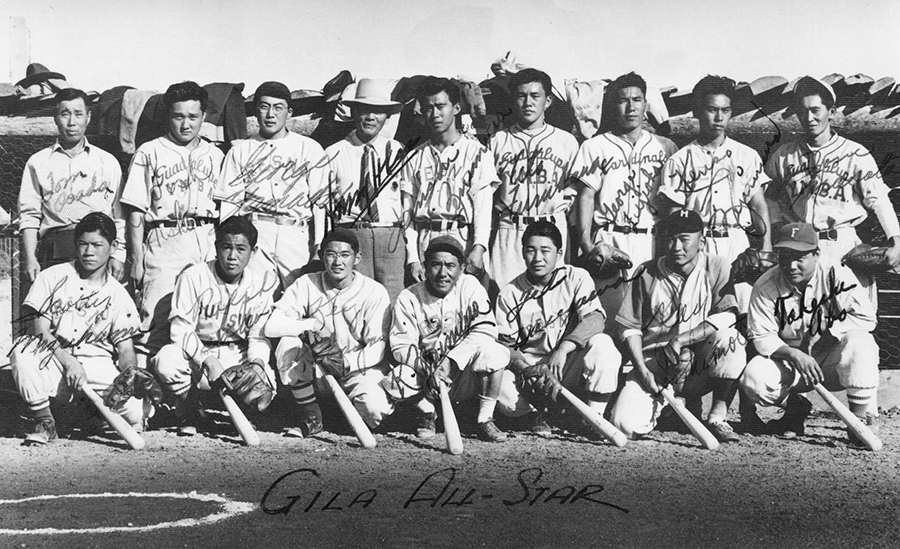 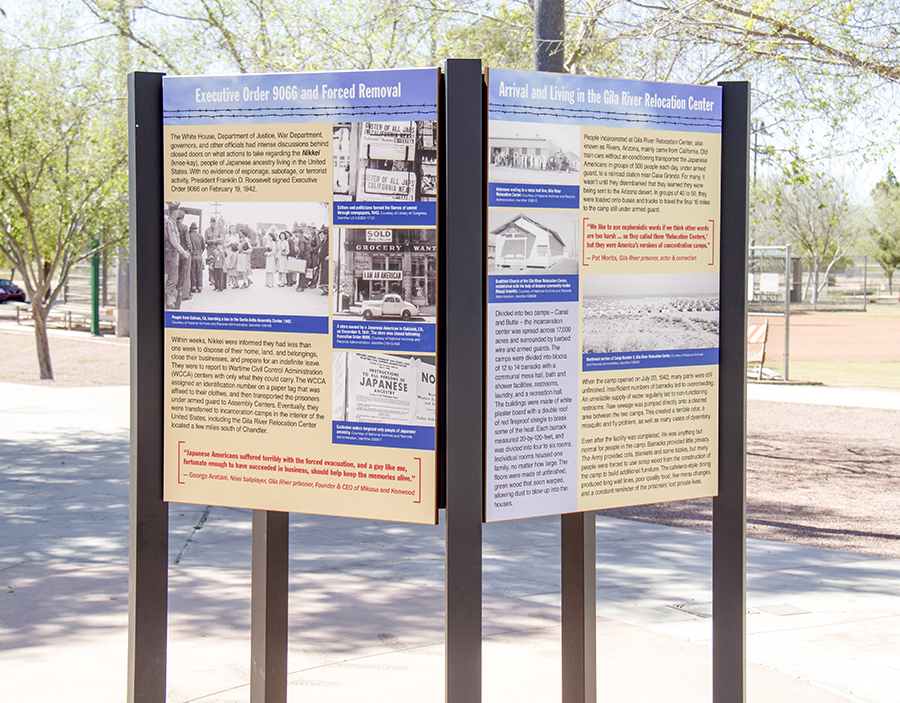 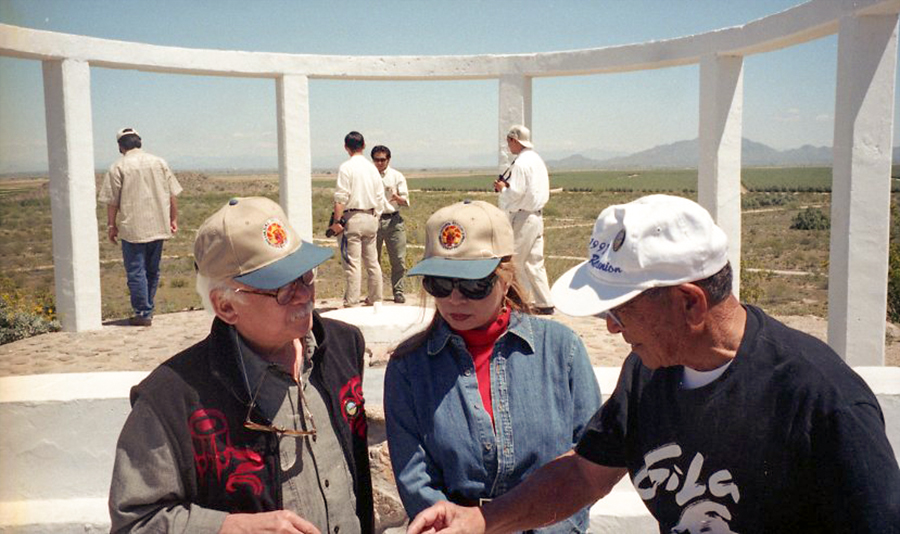 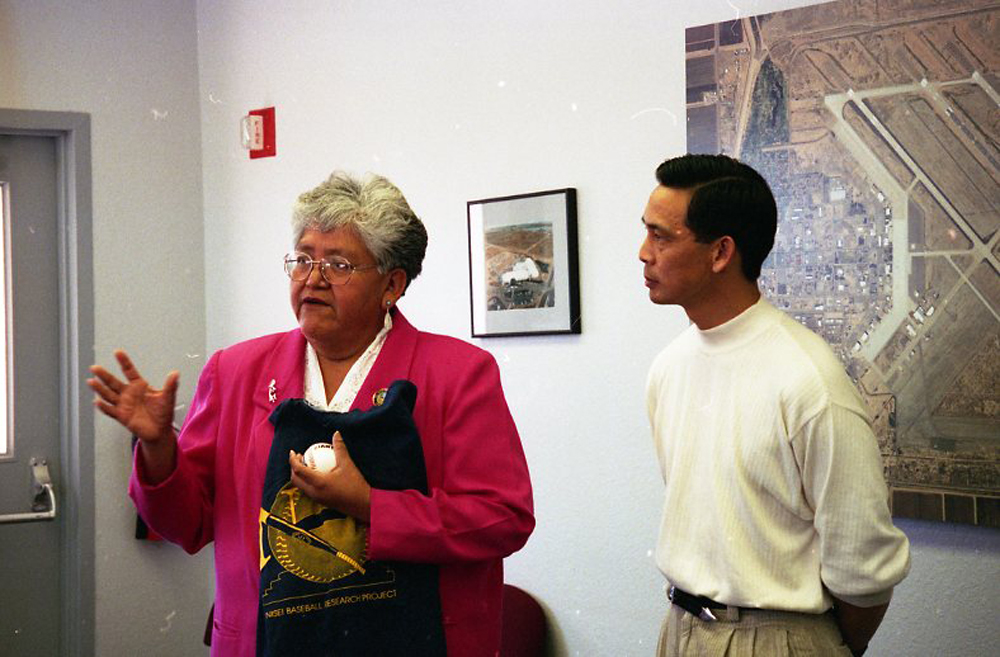