Eight college graduates carried their O’otham heritage with pride as they crossed the graduation platform this month.

With the turn of a tassel, students of the Gila River Culture and Language Cohort became graduates of Arizona State University, thanks to a unique program that brought college classes to the reservation.

At a special recognition ceremony May 4, the GRIC Tribal Education Department congratulated the students for their years of dedication and hard work.

“We’re honored…to be in your presence and see you complete this program,” said Gov. Stephen Roe Lewis at the recognition luncheon.

Graduates earned a Bachelor of Arts in Interdisciplinary Studies with an emphasis on Indian Education. The goal of the  cohort is to develop O’otham culture and language teachers for schools on the reservation.

“I think you guys have set history for our community,” said Lt. Gov. Monica Antone. “You guys now are going to give back to those young children that we talk about, using our language.”

Gov. Lewis said, “You’re going to help all these other students find themselves, who they are as O’otham and Pee Posh people, through education.”

Participants in the cohort spent years earning their degree – many while working full time jobs – taking classes in the evenings and studying on the weekends or late into the night.

What made the program special was the tight bond formed between the Community and ASU. An agreement brought the college campus to Community classrooms. Students took some elective classes at ASU, but core classes were taught at various convenient locations within the Gila River Indian Community such as St. Peter Indian Mission School or the District 3 Head Start.

“This was the first of its kind program that ASU has ever done, holding classes on an Indian reservation,” said Gov. Lewis. “We knew that this meant so much and is going to mean so much to our community in the future.”

Lt. Gov. Monica Antone said, “I’m really proud of all of you that stuck it out. No matter what, you guys stuck it out and attended your classes to make it happen.”

The program took considerable effort and sacrifice on the part of the ASU instructors, who traveled from their offices in Phoenix or Tempe to the rural towns of Sacaton and Casa Blanca.

Dr. Marlene Tromp is the dean of the ASU New College of Interdisciplinary Arts and Sciences, which administered the GRIC cohort program.

Dr. Bryan Brayboy, the director of the ASU Center for Indian Education, gave the program legs and set it on a course to success. Congratulating the graduates at the celebratory luncheon, he said, “Commencement is not the end, commencement means to begin, and it’s the beginning of something really important for your community and ASU is so proud to be a part of what you all have built and continue to build.” 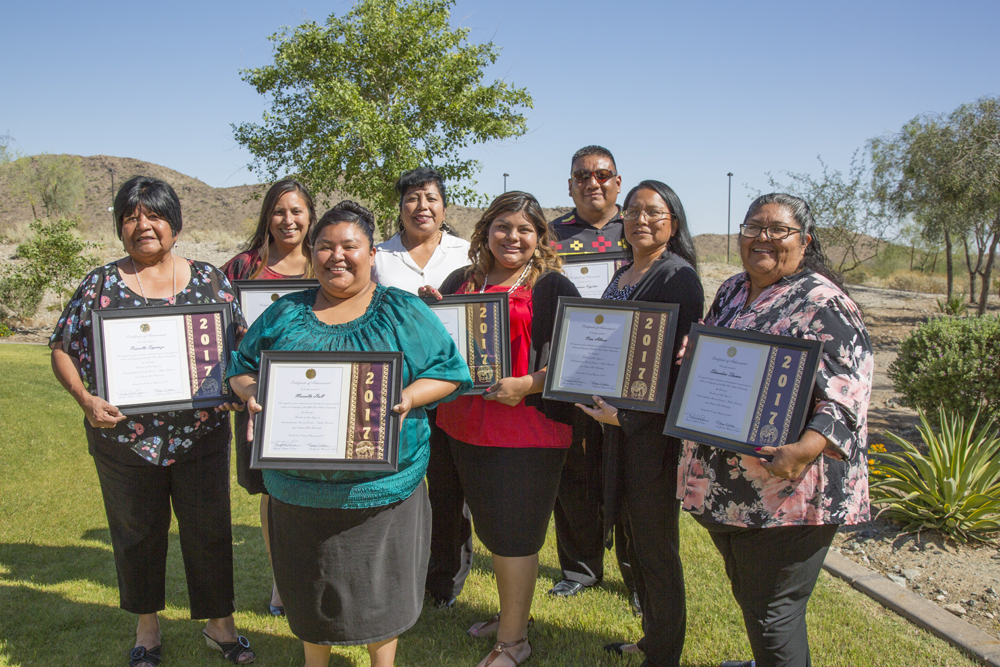