Gila River Indian Community members came out to voice their concerns at a public hearing hosted by the U.S. Army Corps of Engineers at the District 6 Komatke Boys & Girls Club on May 9.

Representatives from the U.S. Army Corps of Engineers listened to a myriad of comments regarding the construction of the South Mountain Freeway project.

Present at the meeting was the Arizona Department of Transportation, which has applied under the Clean Water Act for a permit from the Corp to continue with construction of the freeway project.

When an agency proposes building infrastructure that will cross any waterways, it is necessary for them to obtain a permit from the Corps, as described in Section 404(b)1 of the CWA review process.

According to GRIC Communications & Public Affairs Office press release, Section 404(b)1 prohibits the discharge of “dredged or fill materials,” from flowing into waters of the United States, which includes rivers, streams and washes.

Col. Kirk Gibbs of the Los Angeles District of the United State Corp of Engineers was present to address the concerns at the public hearing.

Gibbs said the Corp evaluates every potential impact the proposed project poses before issuing a permit.

“[We] undertake a public interest in our determination that involves a weighing of all factors relevant to the project,” said Gibbs, “In meeting our regulatory responsibility the Corp is neither a project proponent nor a project opponent.”

The public hearing came at the response of the Community’s Department of Land Use Planning and Zoning, which has voiced its concerns with the Corps over the potential runoff of water from South Mountain that may mix with freeway runoff and flow onto Community lands.

According to the Community press release Gov. Stephen Roe Lewis said, “The Corps must consider the direct and indirect impacts resulting from the portions of the project that the Corps controls and regulates, which include waterways and washes that the freeway will cross.”

Gov. Lewis gave his testimony at the public hearing, stating the importance of the Corps to consider the negative impacts of the freeway before issuing a permit to ADOT.

He appealed to the representatives from the Corps to deny ADOT the permit that would allow them to move on with the construction of the freeway.

ADOT and its partners presented on the different types of infrastructure that will be built to mitigate the flow of water by incorporating culverts along certain sections of the freeway where water normally flows and two bridges that will cross the Salt River, including a Laveen Area conveyance channel to continue the flow of water under the freeway near Baseline Road and 59th Avenue.

The items that were outlined by LUPZ as potentially being influenced by the flow of water from the freeway are the diminished quality of water into Community lands and identified possible flooding in the Vee Quiva and Komatke area.

Other factors outlined include a change in velocity/flow of water entering Community lands that impact existing drainage patterns and adverse impacts on GRIC drainage projects.

Before opening the public hearing to comments, all attendees were provided options on how they could provide their comments, if they did not want to speak openly.

The options included submitting a written testimony, or speaking directly to the court recorder that was present at the public hearing.

Representatives from ADOT were also on hand to hear from Community members and non-members from neighboring communities about the fears around the freeway’s construction and potential impact on the environment, which includes possible flooding near structures in District 6.

Since ADOT’s decision to construct the South Mountain Freeway, which will cut through sections of South Mountain, the Community has been in opposition to the project, because of the harmful impact on the cultural property of the mountain and environment.

In addition to Gov. Lewis’s comments, several individuals came up to voice their concerns about the possible flooding of contaminated water onto Community lands.

The general concern over the freeway project is the runoff of contaminants from the freeway that may have a drastic impact on the surrounding environment and the water table in the area.

The corps regulatory program will evaluate the permit application, in addition take into consideration the public comments provided at the hearing and through other forms of correspondence, before making a final decision. 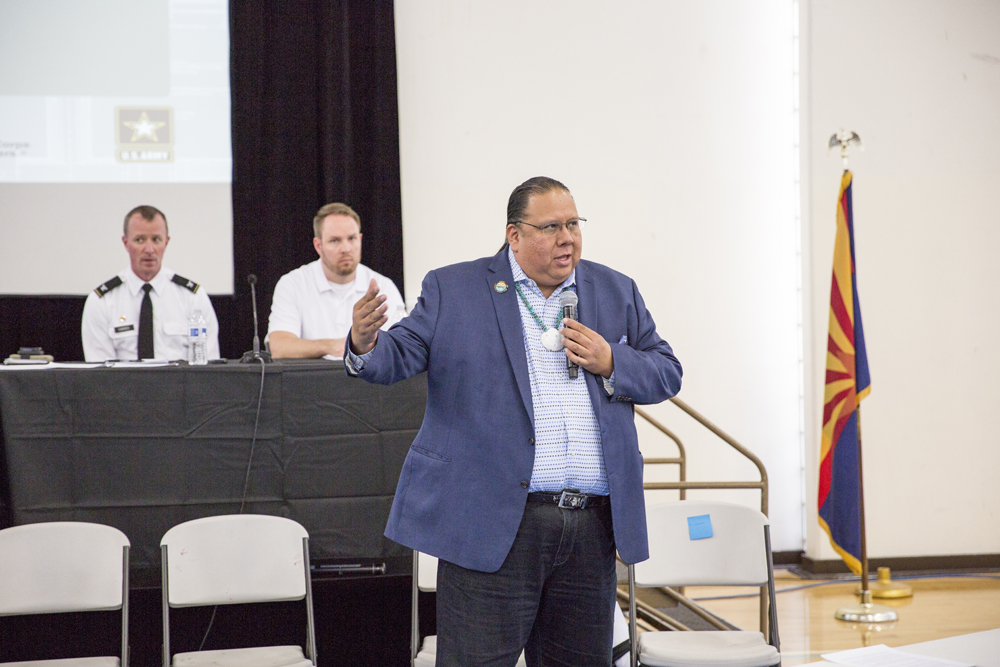 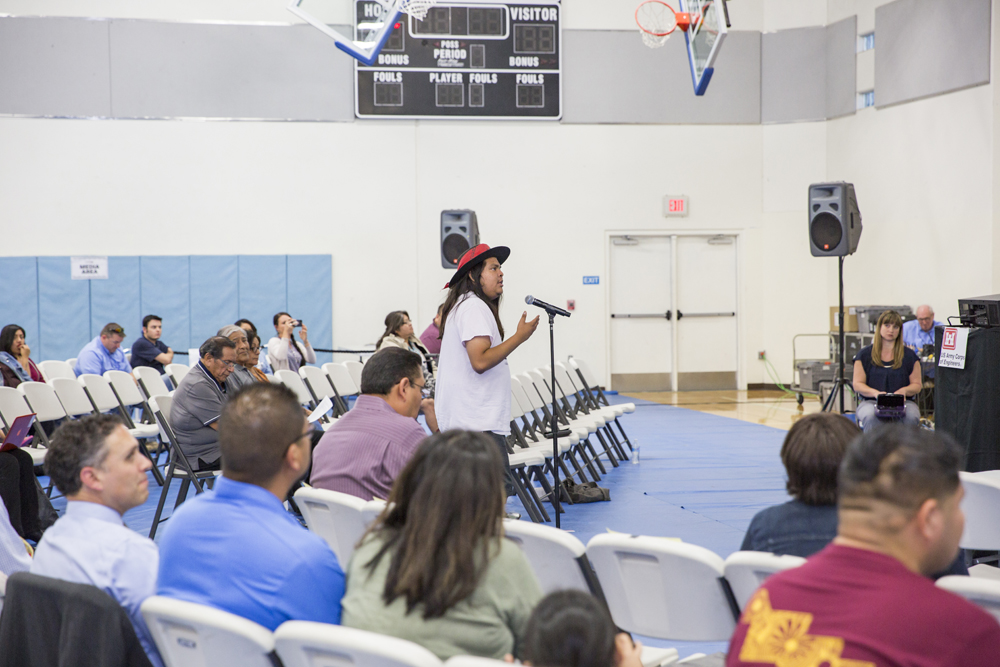 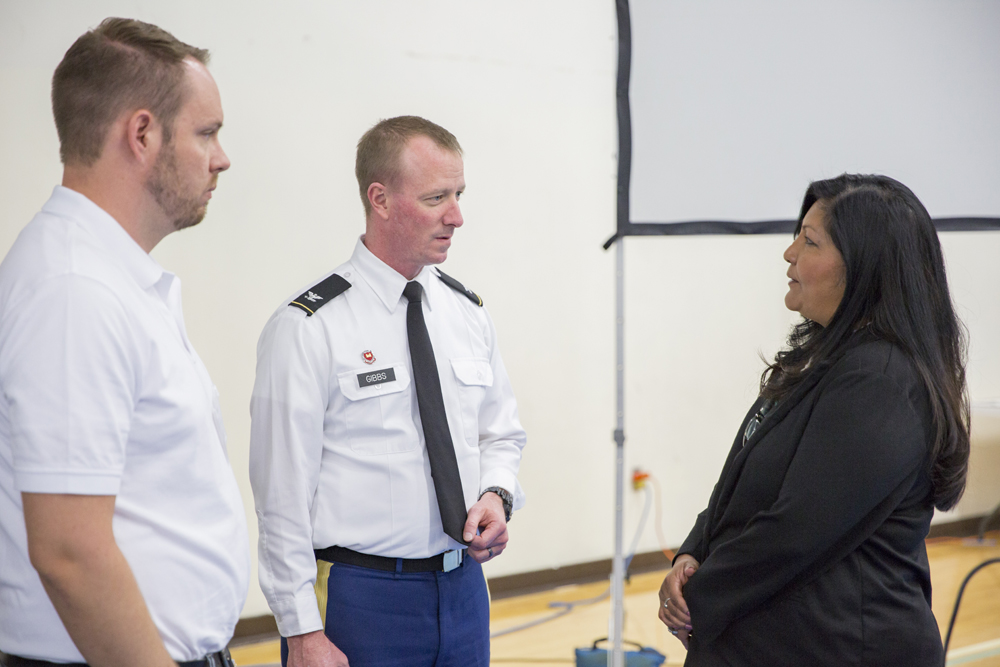 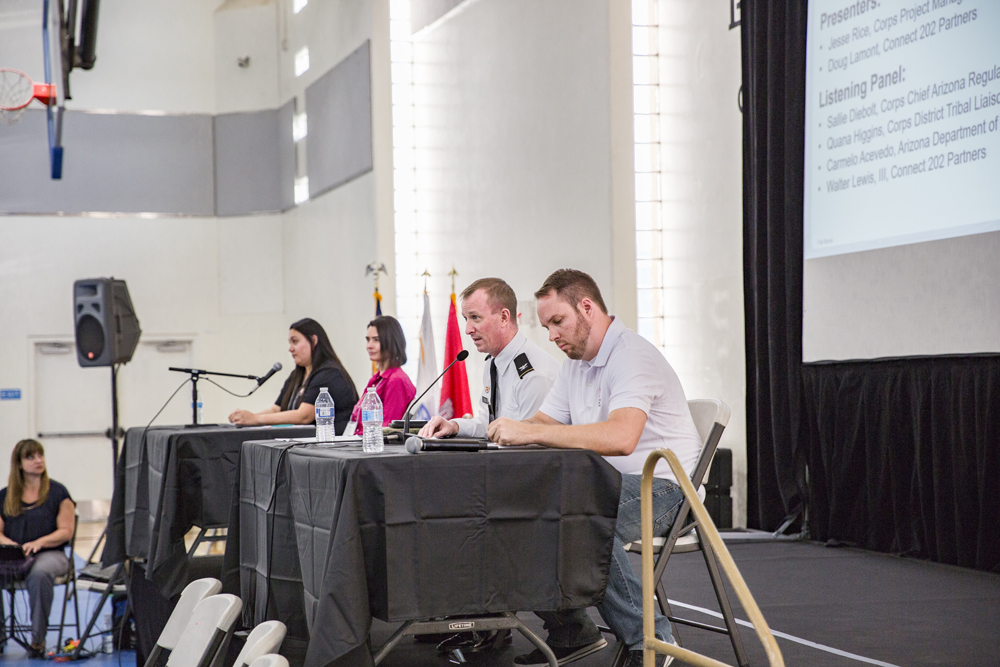 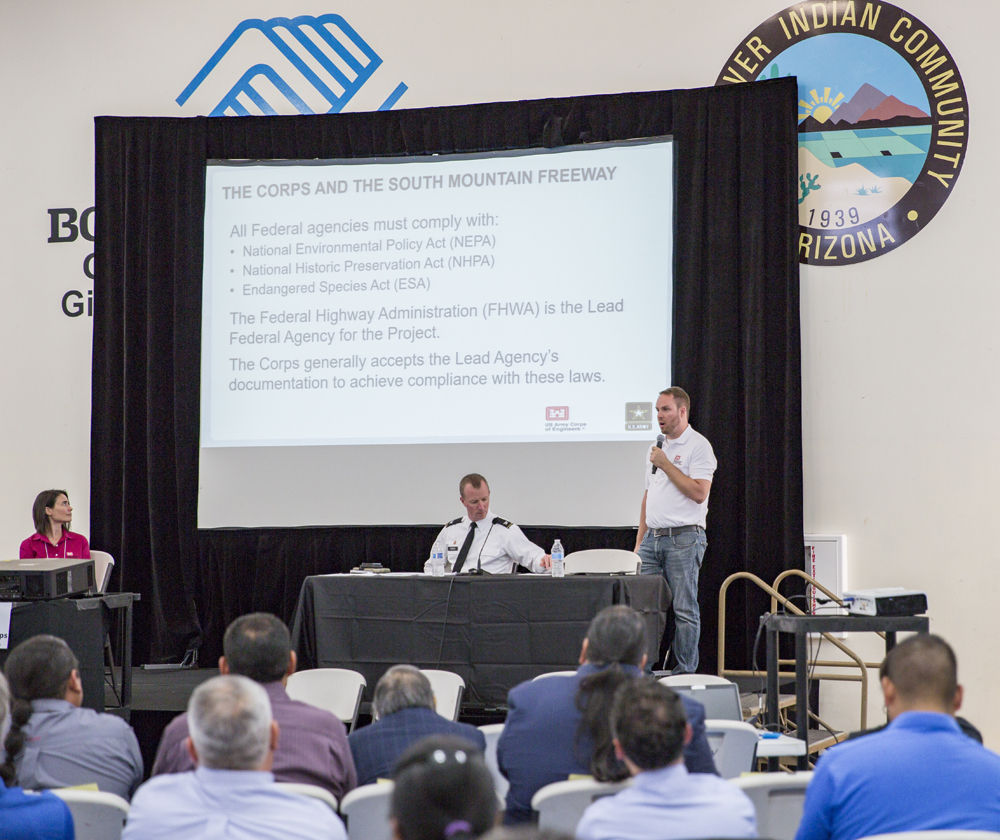 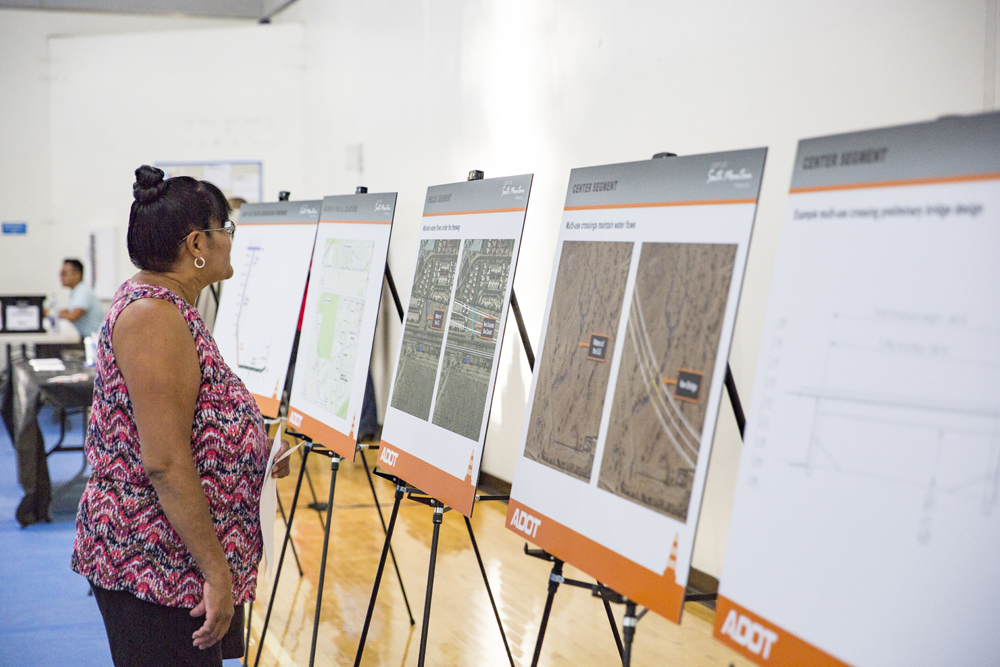 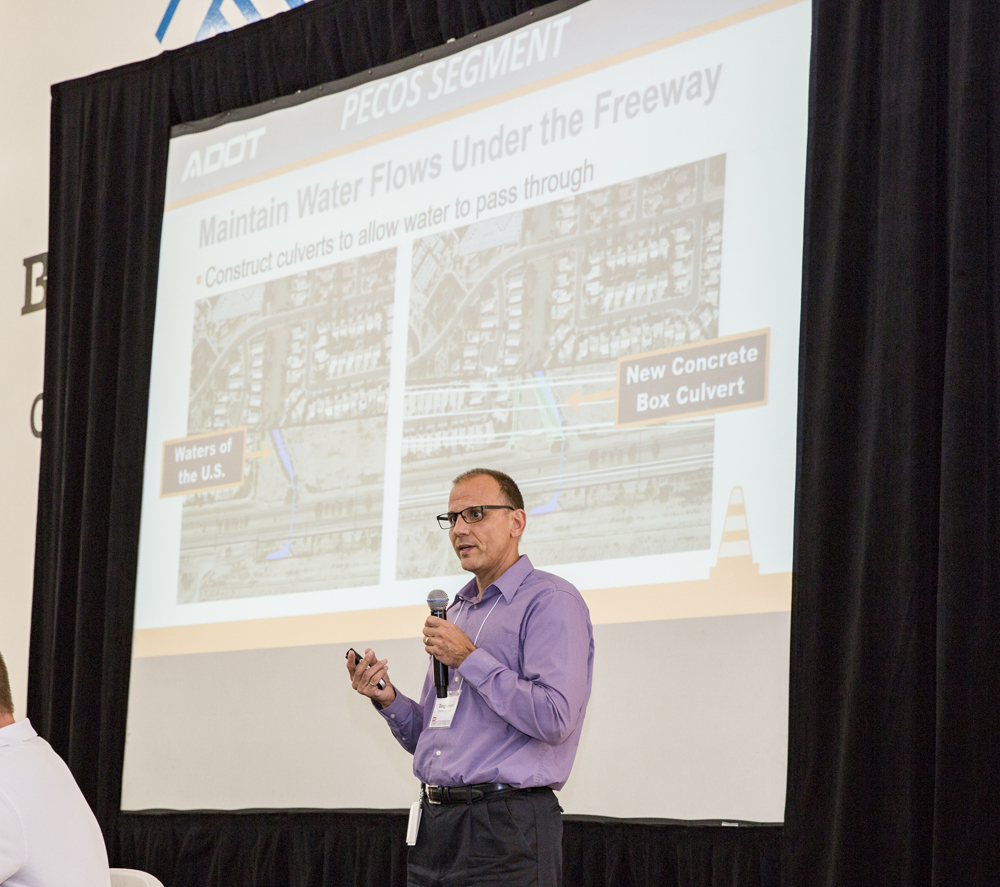 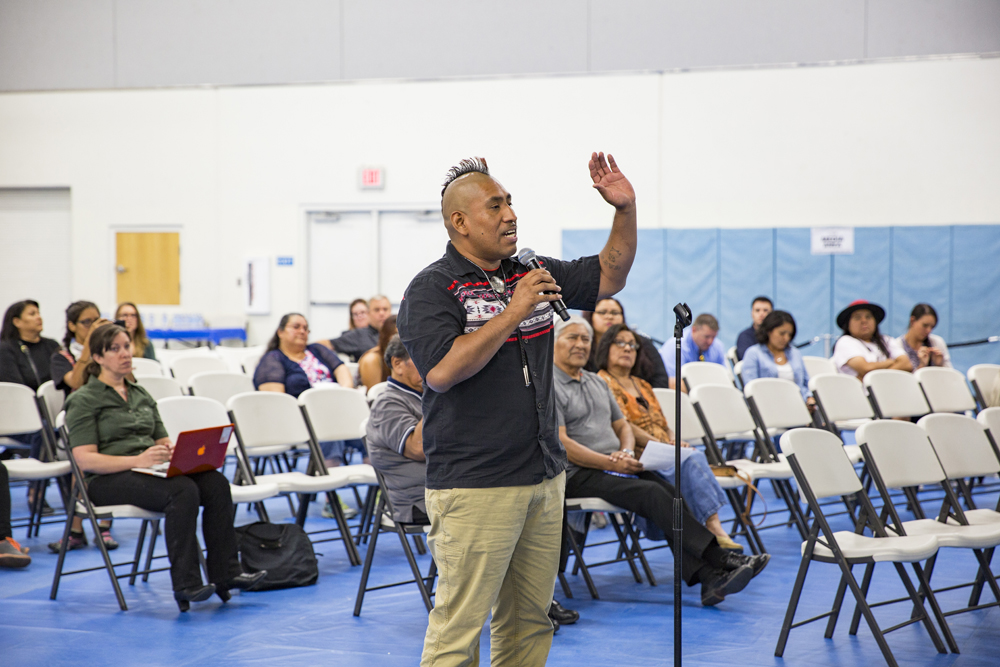