GRIN Articles > "Yes" and "No" Questions in the O'otham language

"Yes" and "No" Questions in the O'otham language

As the weather begins to get hotter outside it is important for us to stay hydrated. In O’otham one way to ask if someone has had any water to drink is by saying Napth hekiu i: heg shu:thag?

This question is called a yes/no question because it is the type that can be answered simply by saying ha’o/no: ‘yes/no’ (although there are also other ways to answer this question, for example koi’shai ‘not yet’). Yes/no type questions are recognizable from the initial “n” sound that starts the question and that attaches to the auxiliary verb.

This question also makes use of the O’otham verb i:’i which means “to drink something” and which appears in different forms depending on the type of action described in the sentence. Verbs in O’otham will often change slightly based on whether the action has been completed or is ongoing and recognizing the different forms that verbs have is important for O’otham learners.

If you had more than water to offer and wanted to ask someone what they want to drink you can do this in O’otham by using the question Sha:chu ‘aptho i:? This question is a way of asking “What do you want to drink?” or “What are you going to drink?” and is used when you have different options available to the person you’re talking to.

This type of question differs from the yes/no type in that it cannot be answered with only ha’o/no: but has to be answered with a specific item, like shu:thag ‘water’, nalas vadag ‘orange juice’ so:la ‘soda’ and so on. One way to respond is by just saying your selected choice in O’otham (shu:thag, nalas vadag, so:la). Another way to answer this is by using the phrase Vantho i: heg _________ along with adding the drink of your choice.

For example you can say Vantho i: heg shu:thag which is a way of saying “I’m going to drink water” or “I’ll have some water”. Some speakers may prefer a slightly different answer where you state your choice first and then follow it by the phrase antho i:. In this case you would say Shu:thag antho i: to state “I’m going to drink water” and both phrases are understood by speakers.

Notice that these examples all use the form of the verb “to drink something” that is pronounced i:. That is because all of these examples are talking about an action that will be completed sometime in the future. The part of the sentence that tells the listener that you are talking about an event that will happen at some point in the future is the future marker o that is found at the end of the words vantho/antho.

But say you wanted to ask someone what they had to drink that morning. This is done in O’otham using the question Sha:chu apth i: sialim? This question asks about an event that has already happened, or has been completed in the past. Because the event is already seen as “completed” or “finished” we use the same i: form of the verb ‘to drink’ that was seen in the first example. Answering this question would also use the same form of the verb, in this case we would say Vanth i: heg kovi: to say “I drank coffee”.

Once again, some speakers may prefer to use a slightly different phrase where you answer with your choice of drink first. These speakers would say Kovi: anth i: to mean “I drank coffee” and both answers are readily understood by speakers.

Finally, let’s change the situation slightly and say you wanted to ask someone what they were drinking at the moment. To ask this question you would change the question slightly to Sha:chu ap i:’e? which states “What are you drinking (right now)? Notice that the form of the verb i:’i “to drink” has changed in this example to i:’e.

That is because the verb is describing an action that is ongoing at the present moment and has not been completed (the person you are asking is in the process of drinking and hasn’t finished his/her drink). Just like in the previous examples you can answer this question simply by saying the type of drink in O’otham (kovi:, vi:p, thi:) or you can use a full phrase. The appropriate full phrase in this case would have to use the same form of the verb as in the question.

For example if you wanted to say I’m drinking tea you can say Vañ i:’e heg thi: making use of the phrase Vañ i:’e heg _______. And as we have seen before some speakers may prefer a slightly different phrase where the choice of drink is said first. To answer in this manner you would say Thi: añ i:’e and be understood as saying the same phrase.

It is important to understand that speakers can and will vary in how they say each of these phrases depending on where they’re from and how they learned to speak O’otham. All of these variations are understood and contribute to the richness of our O’otham neo’ok.

This month’s word match will give you more practice on how to say the phrase I’m going to drink _______ in O’otham. Say each version of the phrase to yourself and try to understand what it is that you are selecting.

Then match the phrase with the appropriate picture that you’ve selected.

Try using these phrases with your friends and families and ask speakers in your area how do they answer “Sha:chu aptho i:?” in O’otham. 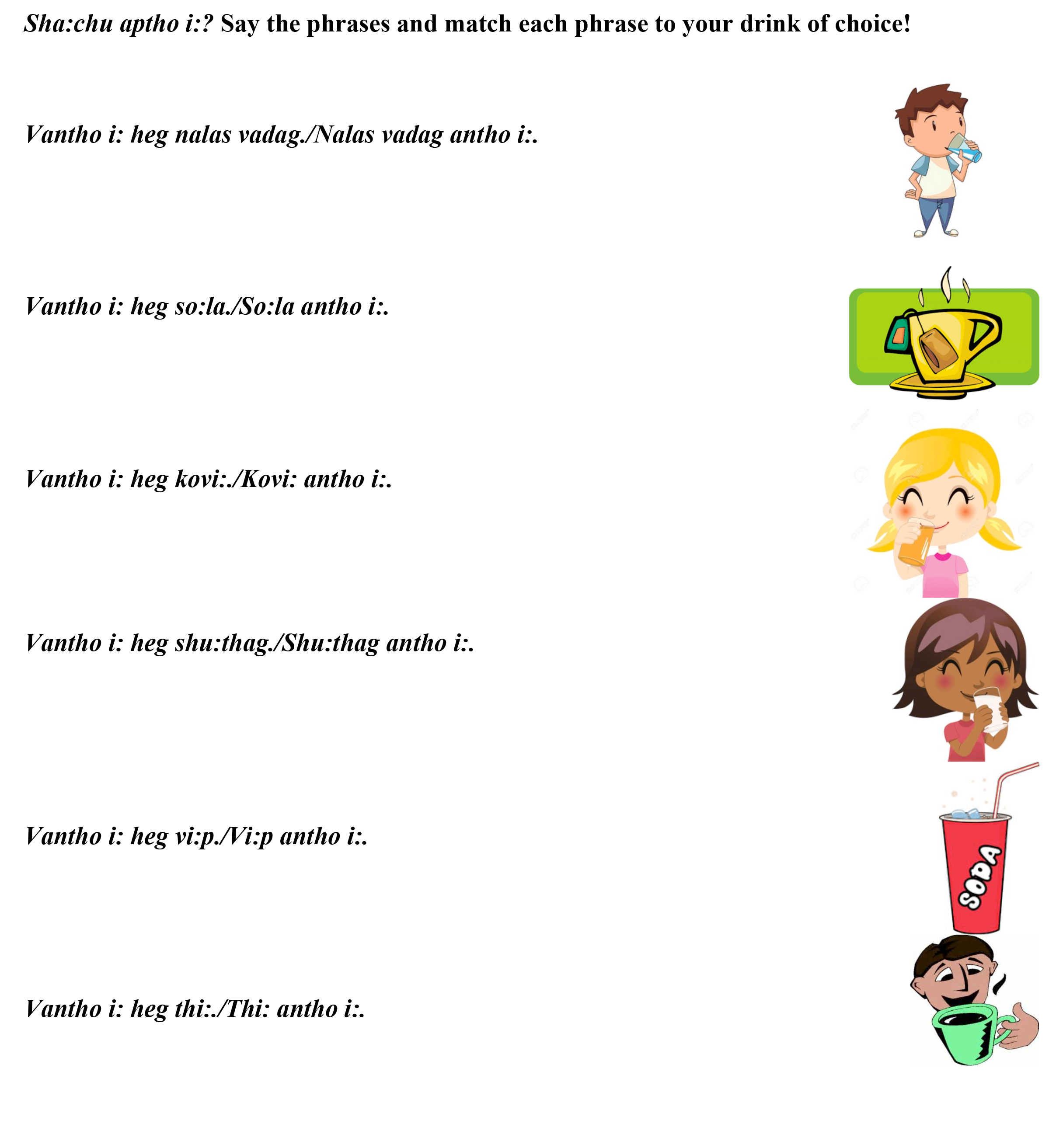 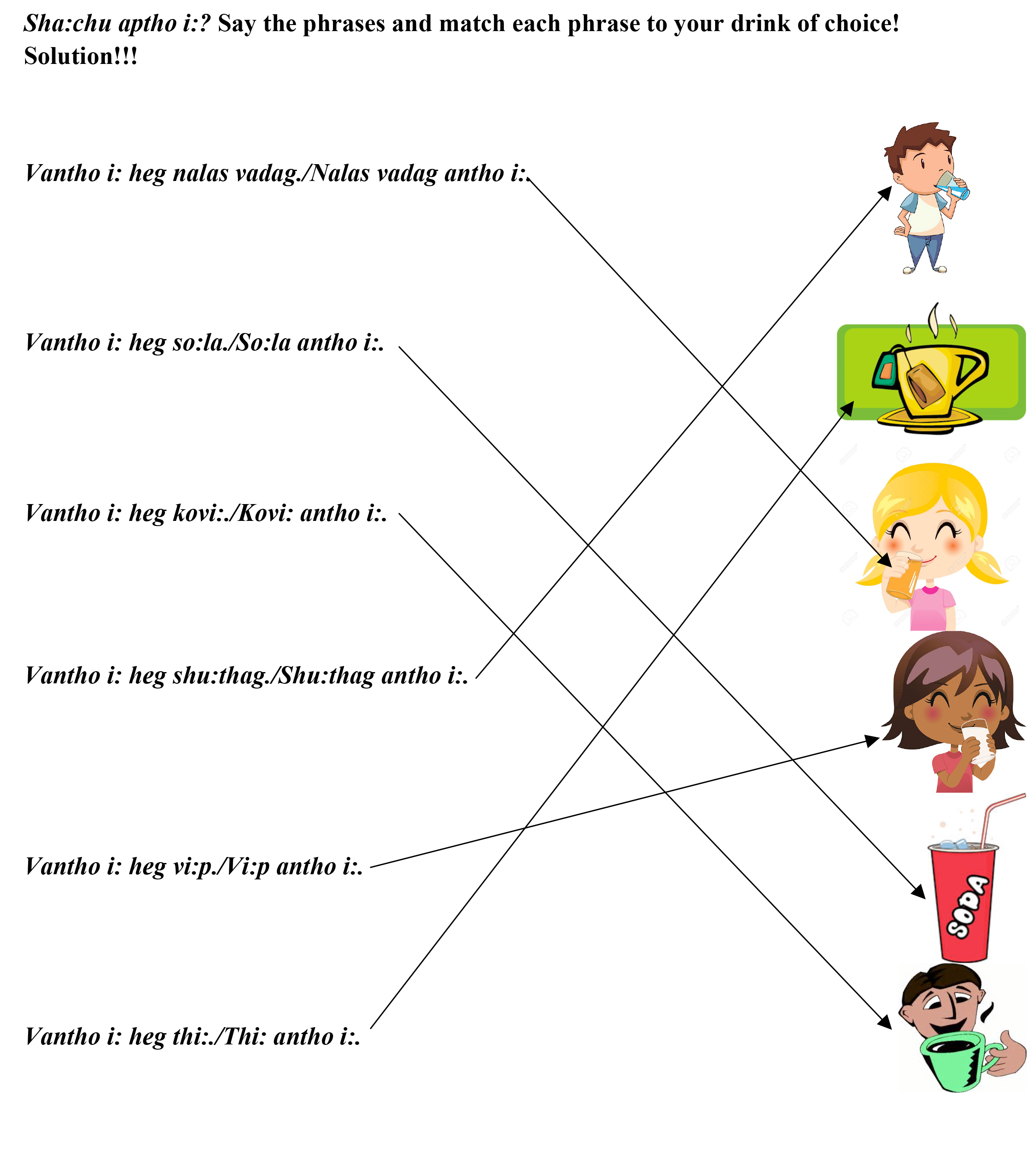