Flying high above District 7’s wetlands, a single bald eagle glides calmly on a current of warm air searching for its next meal, while far below amid the bushes and salt cedar, a crew of a dozen or so workers raises a monumental 40-foot artificial bald eagle’s nest, with carefully designed perches and even a nest made of twigs and branches.

On the morning of Sept. 29, members of the Gila River Indian Community Department of Environmental Quality, Tribal Fuels and Restoration Crew, the Arizona Game and Fish Department, and Salt River Project Utility Company worked together to raise Arizona’s only artificial bald eagle’s nest.

Russell Benford, DEQ Senior Wildlife Biologist, said the structure is a telephone pole with a platform mounted toward the top. On the platform sits a large nest made of stick piles. While it may seem like a simple setup, the artificial nest, which is five to six feet across, has been thoughtfully designed.

“Decades of research have gone in to it,” said Benford. “There is a body of literature out there of people who have researched, watched how eagles build their nests, where they do it, [and] what the characteristics of the trees are.”

He said many of the nest’s attributes were carefully constructed to insure the pair of bald eagles would find the structure comfortable.

“One of the calculations we made for this nest was to make sure the sun wouldn’t shine too brightly on the eagles in the nest in the middle of the day, which might cause them to overheat,” Benford said. “So the central post sticks up above the rest of the nest, and that is going to shade [the eagles] during the hottest part of the day.”

Even the sticks used to build the eagle’s nest were measured to precise lengths of 2 meters with a diameter of 2 centimeters, a size found to be appealing to bald eagle’s nest building sensibilities.

“It is reasonable to think they are the same ones. Eagles are very territorial and if a breeding pair finds a good territory [and] can successfully have offspring in that territory, they will defend it and come back to their same nest site every year,” Benford said.

Earlier this month the pair of bald eagles had just recently returned from their travels up north in Saskatchewan, Canada, and are currently on the lookout for a new nest to call home. The hope is the bald eagles will find the artificial nest too good to pass up, but there is always the chance they will choose an alternative nesting site.

“The birds would rather spend less of their time and energy building from scratch then rebuilding a nest that is already constructed, so hopefully they will see an already constructed stick pile, they will improve it to their liking, and if it meets their needs they will nest there,” said Benford.

He said the bald eagles have not chosen a nest yet and will spend the next several months looking around the wetlands for a suitable home. Once the nest is chosen, the pair of bald eagles will settle-in and produce young.

“If it is successful, GRIC will be out in front of eagle conservation in that we have built the first artificial nest in the state that has succeeded,” Benford said.

The effort to build and raise the artificial bald eagle’s nest has been almost two-years in the making and been a large collaborative effort.

The Tribal Fuels and Restoration Crew, which is a crew formed by a partnership between the BIA Pima Agency, GRIC Employment and Training, and GRIC DEQ, shouldered much of the physical labor constructing and raising the nest and clearing the surrounding area of potential fire hazards.

SRP donated and installed the telephone pole, while the Arizona Game and Fish Department assisted with the technical aspects of building a proper bald eagle’s nest. Additionally, the Community itself, its Nestwatchers Program and tribal leadership, has played a large role in keeping the pair of bald eagles healthy and safe.

“Our nestwatchers have really spent a lot of time and energy caring for these birds for many years,” said Benford. “Those birds are really points of pride for the entire Community,” he said. “Community leaders [and] elders recognize the birds are important… and they have been tremendously supportive in supporting this project.”

For one crewmember in particular, the artificial nest raising was an emotional and moving moment. Standing just a few feet away from a mangled fallen cottonwood tree, Alan Sinclair, BIA Fire Management Officer Pima Agency/Salt River Agency recalled, “Four years ago we had a fire here, this tree had a nest in it and there were eagles in it that had fledged. This tree was killed in the (2013) Pee Posh Fire, the nest was destroyed and unfortunately we lost the baby birds in it as well.”

“This is a very important project to me, it feels like it has come full circle. The day that we lost the birds was probably one of my worst days fighting fires, and to be able to come back four years later, and putting up this structure in hopes the birds come back to the Community is pretty rewarding,” Sinclair said. 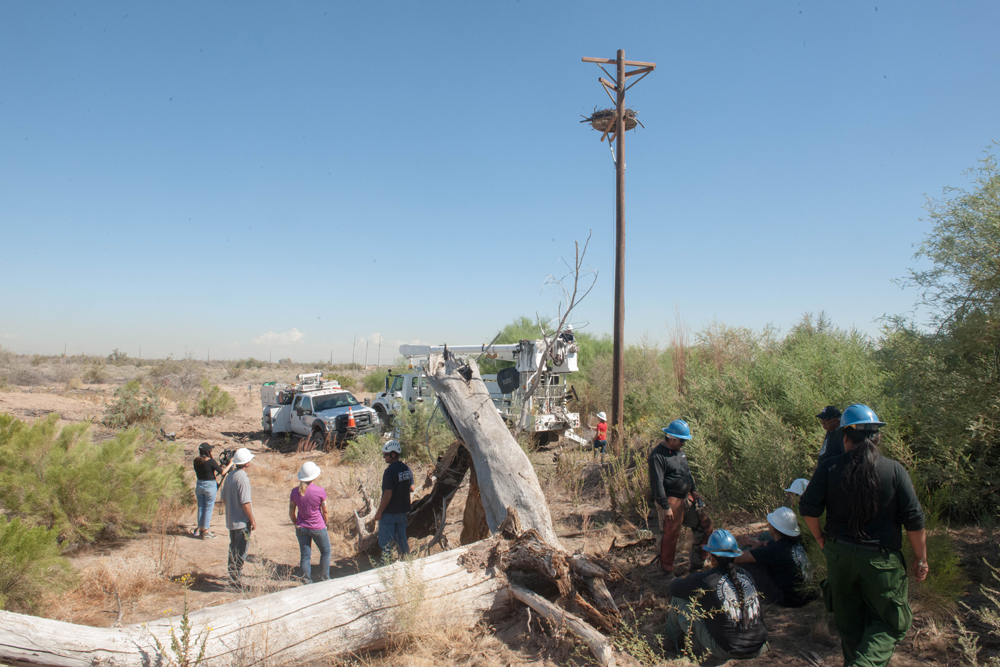 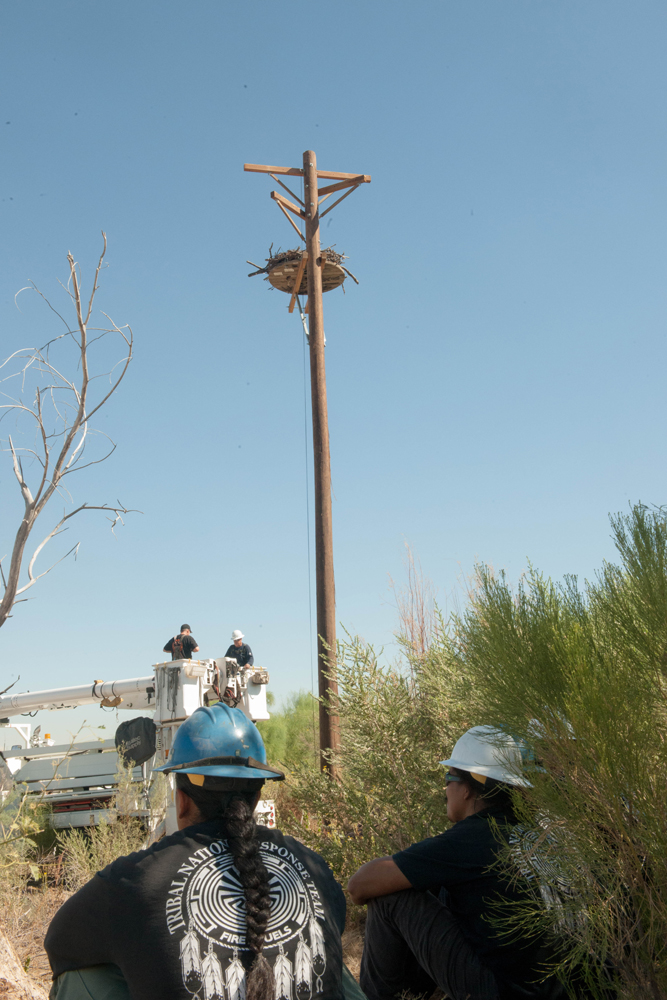 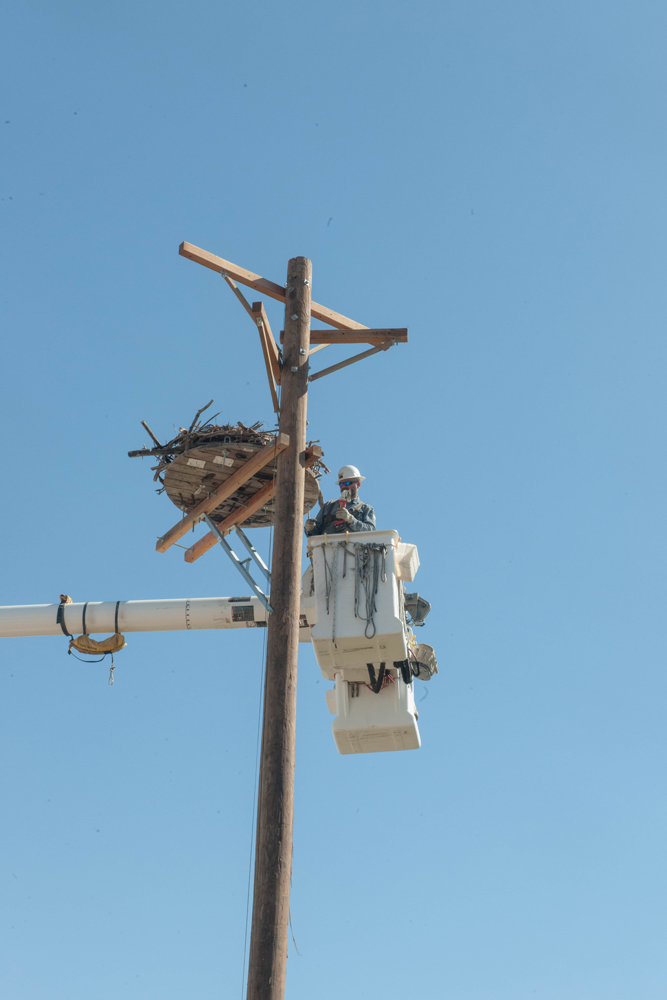 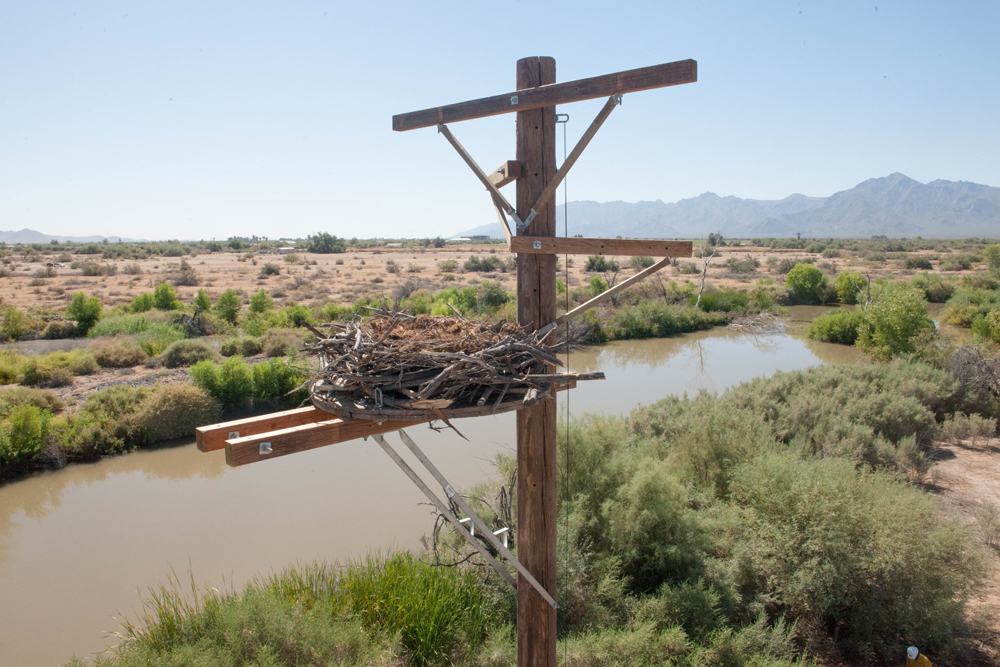 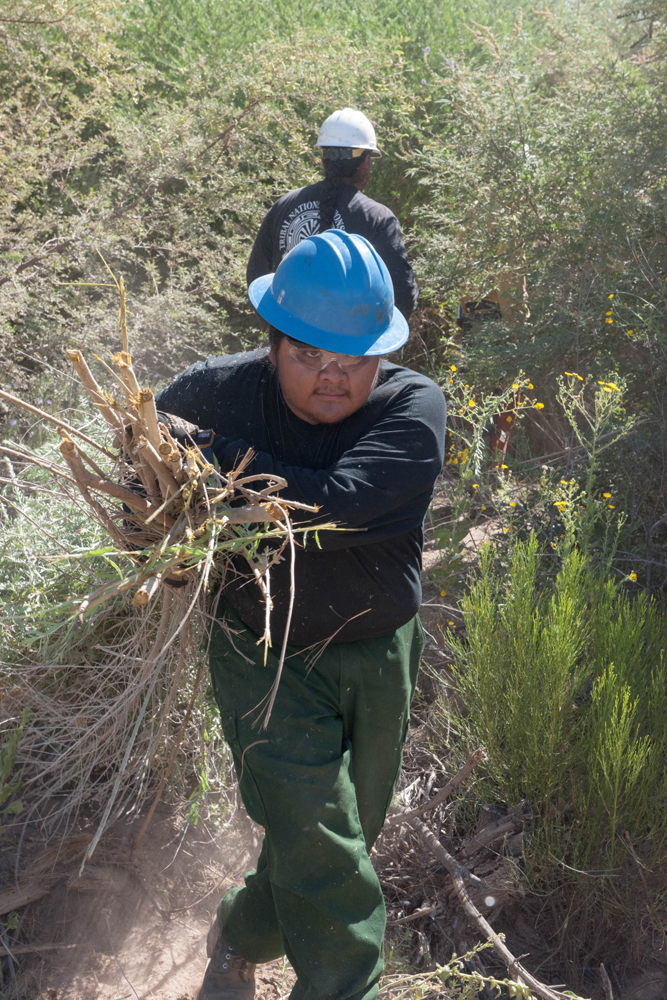 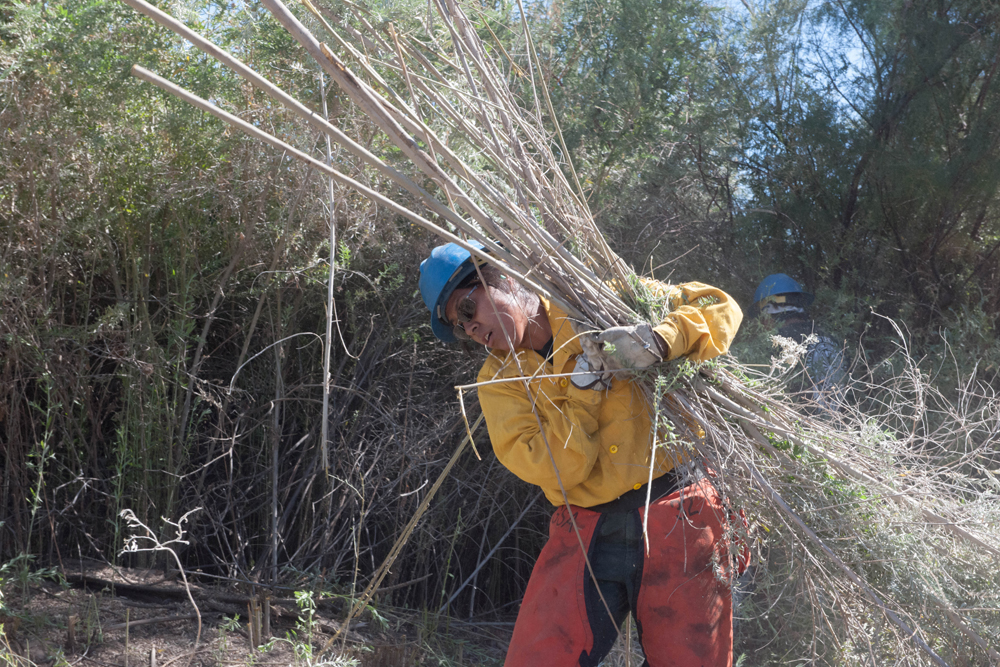 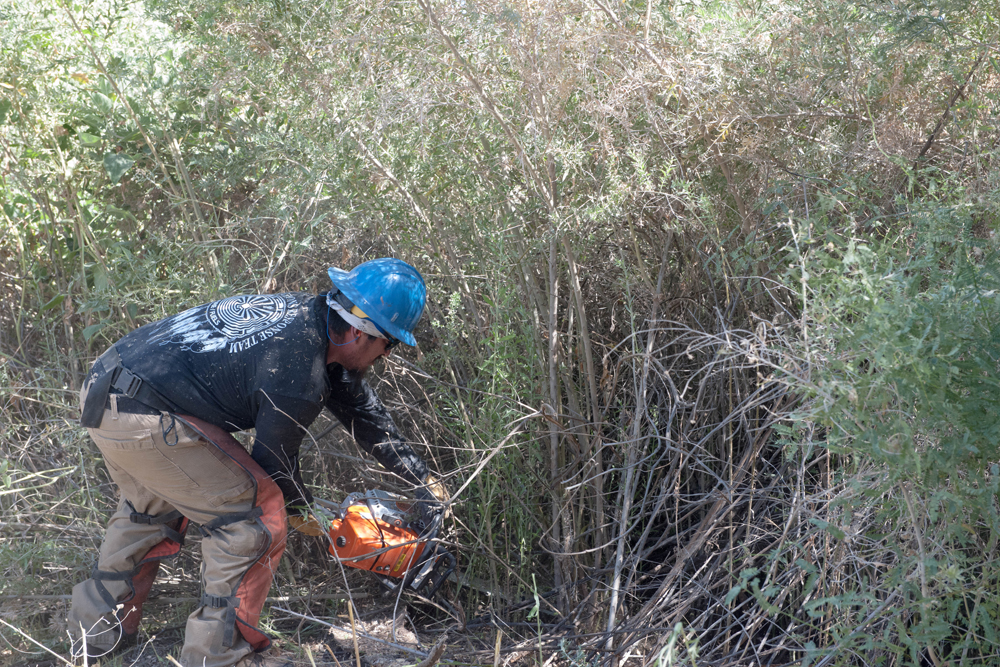