DEQ and Pima Agency to restore wetlands with natural vegetation

In an effort to remove invasive salt cedar and restore native vegetation to areas of the Gila and Salt rivers and to promote beneficial ecosystem management through fire management, two resolutions passed by the Gila River Indian Community Council on Sept. 6 will allow the Department of Environmental Quality and Bureau of Indian Affairs Pima Agency Fire Management to begin restoration work this Fall.

These two resolutions are in effect partner resolutions that will be utilized to remove portions of the Gila and Salt rivers of salt cedar, re-plant native plants in their place, and burn or distribute the left-over organic material to the Community.

Invasion of the Salt Cedar

If you’ve spent any time in District 6 or 7, you’ve probably noticed a belt of lush greenery growing throughout the bottom of the Gila and Salt rivers. While it may be nice to look upon, the greenery is in fact an invasive species harming the river’s native ecology, and the cause of several recent wildfires.

The culprit, salt cedar, also known as tamarisk, was placed in river watersheds throughout the American southwest by the United States Bureau of Reclamation (USBR) around the turn of the century, in an effort to reduce soil erosion.

Russell Benford, GRIC DEQ Senior Wildlife Biologist, said the issue began when the USBR reengineered waterways by channelizing rivers and diverting water, changing them from a natural state to what is now an unnatural state.

“They realized very early on that those changes resulted in a lot of soil erosion,” Benford said. “To stabilize the river banks and prevent soil erosion, they needed to re-vegetate them with something.”

That “something” turned out to be salt cedar, a plant native to Mongolia, which is very salt and heat tolerant, grows quickly, and does not require much water.

“They seeded riverbanks with salt cedar as part of a soil conservation initiative. They weren’t thinking about the broader impacts then. In the intervening years, ecologists have studied these systems and realized salt cedar is as big of a problem as soil erosion, if not worse,” Benson said.

Over the years salt cedar has gone on to aggressively spread throughout southwestern river watersheds, especially systems that have been modified. It has greatly impacted the Gila and Salt rivers, and once the plant begins taking over an area, it pushes out almost all other vegetation, leaving only salt cedar. Because plant diversity is low where salt cedar grows, animal diversity is also low in affected areas.

The areas of the Gila and Salt rivers that will be restored are located in District 6 and 7, with much of the focus being on the portion of the Gila River just east of St. Johns, and westward to the confluence with the Salt River, and the lower Salt River starting at the Pee Posh wetlands down to the confluence with the Gila River. It is in these areas the greatest densities of salt cedar have been found.

“We [will] remove the trees by cutting, and selective use of herbicide, and once we are sure we have removed the trees then we are going to reseed that area with the seeds of native plants,” Benford said.

The project areas will be reseeded with plant species either beneficial to wildlife or culturally useful to the people of the Community, for example, plants used in basket weaving like devil’s claw or plants used in traditional structures like screw-bean mesquite, which is used in the construction of vatos.

After crews cut and remove salt cedar from the project areas, the leftover biomass will be burnt in piles, or chipped and laid down as mulch, or distributed to the Community for personal use.

Alan H. Sinclair Jr., Fire Management Officer for the Pima Agency/Salt River Agency has worked in GRIC for the past nine years mitigating fires and reducing fuel hazards in the Community, and seen firsthand the severe effects of salt cedar fires to the Community’s plant and wildlife.

Sinclair was instrumental in creating the restoration and fuels reduction plans and will lead their implementation by utilizing the expertise of Pima Agency Wildland Firefighters.

The firefighting crews, which are made up of Community members, will begin the restoration project by cutting fire breaks into the masses of salt cedar, remove the invasive plants, apply herbicide, and reseed cleared areas with native vegetation. The firebreaks will also function as intended, to create an obstacle for future fires.

The new plans will not only restore portions of the two rivers and allow the Community to get rid of dangerous fuel hazards, it will also create jobs for Community members.

Pima Agency Wildland Firefighters, who spend much of the year fighting fires in different states in need of assistance, come back home to the Community when not actively assigned to a fire. With the passing of the two resolutions, the firefighters now have an opportunity to get back to work in the Community restoring the Gila and Salt rivers to their natural glory. With funding for the project spanning the next four years, there is plenty of work ahead for the crews.

“Now [that] we have a tribal fuels crew they are doing the fuels work and when the fire bell rings we put them on a fire crew and they go off and fight fires, then they come back and are back on project dollars working in the Community,” restoring the local river systems, said Sinclair.

Sinclair said the point of the programmatic burn plan is to stop wild fires from occurring by reducing hazard fuels. He said while burning salt cedar piles is part of the plan, it will also be used to rid the Community of other fuel hazards.

“This programmatic pile burn plan is going to allow us to burn piles throughout the Community, whether it is stuff coming out of the weeds, out of the trash rack in the canal system, or any of the woody debris (salt cedar) in these project areas,” Sinclair said.

Fire crews will follow strict protocols while burning piles of biomass, igniting fires only under the authority of prescribed fire plans approved by GRIC’s DEQ and the State of Arizona’s Department of Environmental Quality during favorable conditions all in an effort to keep the Community’s air clean.

“It has taken nine plus years to get to this point,” said Sinclair. “I think there is a challenge with the current condition of the environment and I think we’ve got an opportunity to make a difference,” Sinclair said. 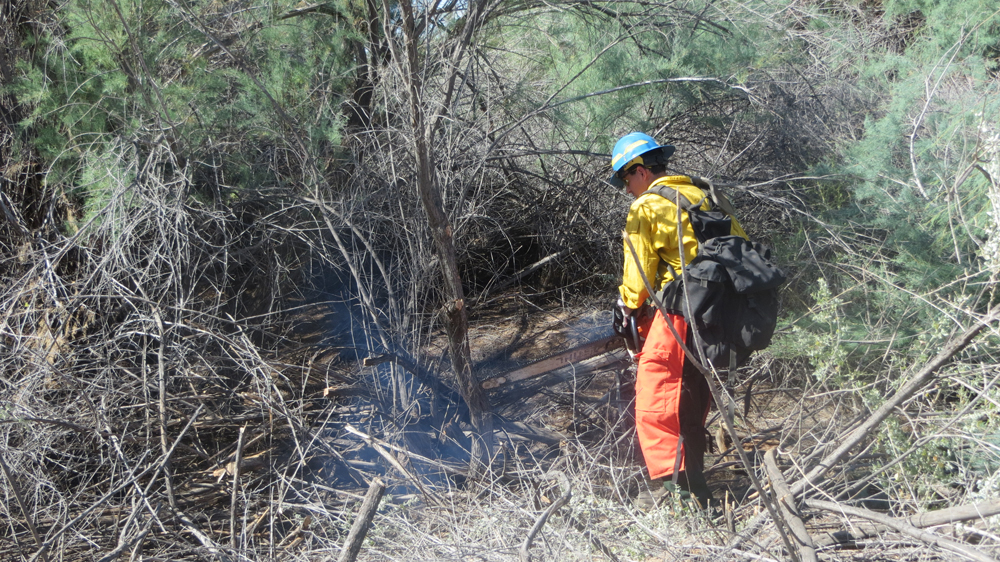 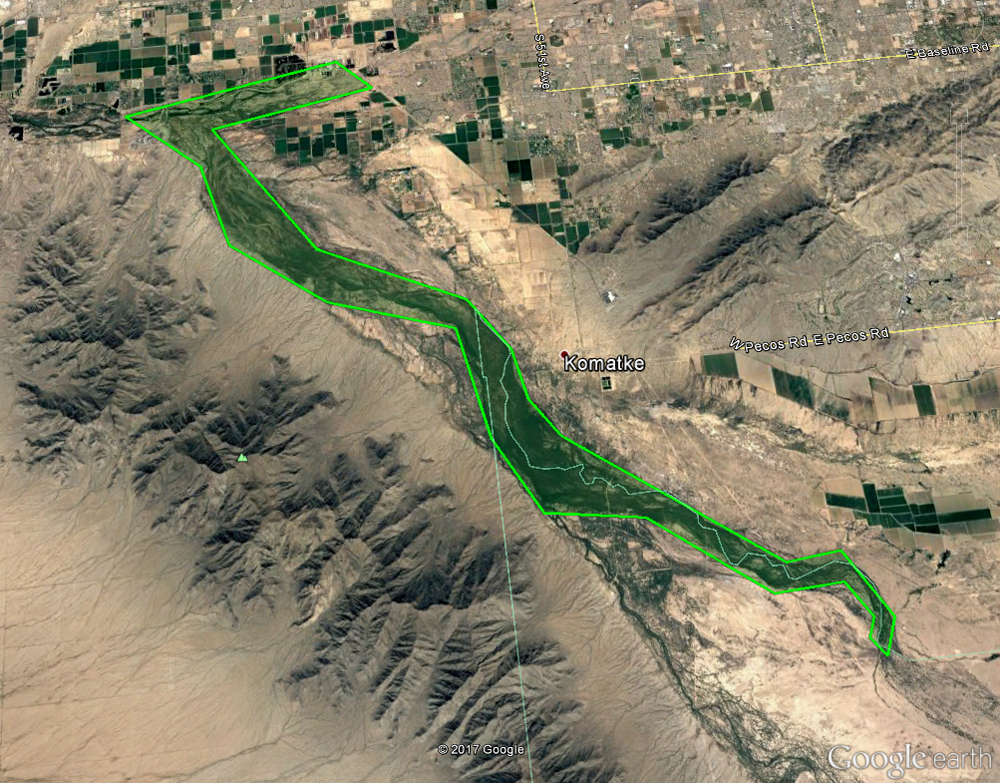 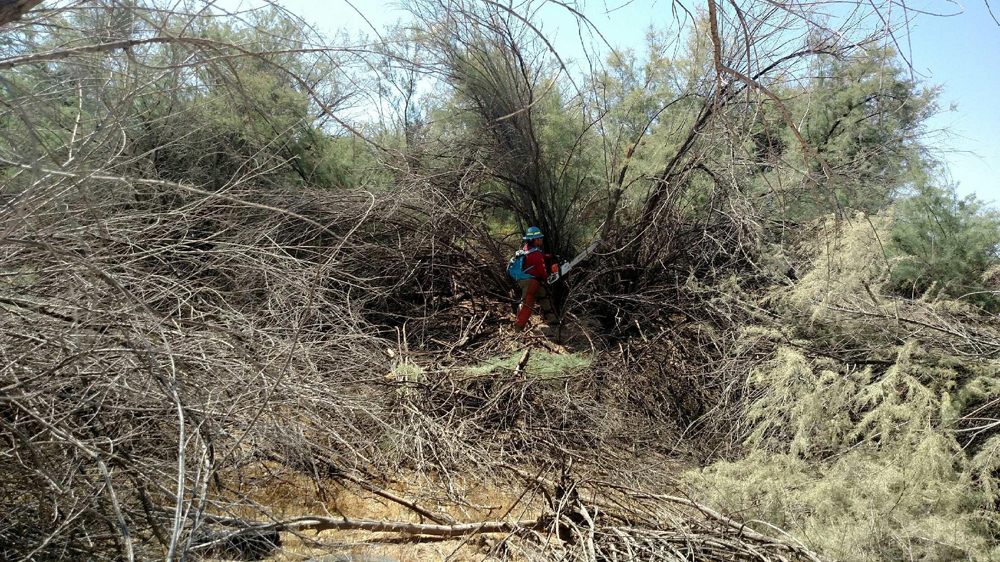