If you flick through a copy of the Gila River Indian News you’ll find a certain contributor who doesn’t rely on words or a photograph to get his point across, but a drawing. His lede is a sketch and his paragraphs are painted not typed. No byline either, just an artist’s signature penned in the corner.

You may have come to recognize Wayne Narcia Sr.’s satirical cartoons over the last few years, but you may not recognize him walking down the street. Chances are if you did see him, he was thinking about his next cartoon.

Narcia, 55, submits editorial cartoons to the GRIN. With his views on Community related news and events, Narcia always keeps a bead on the GRIC barometer. “Every paper should have a cartoon,” Narcia says.

What motivated him to start cartooning? Was it a contest? Boredom? Narcia is the type of person that draws ideas from the place he lives—the Gila River Indian Community. “I think it was the Community that really inspired me to do cartooning,” he says.

One of his first drawings depicted a bucket labeled “Percap.” Just an ordinary bucket, but this one had a hole, leaking. “A lot of family told [me], ‘why don’t you send it in?’”

From then he’s been a regular visitor to our office with sheets of 100lb watercolor paper of his latest creations. Some make it to the GRIN, some don’t. He’s covered topics relating to politics, the environment, ICWA and Native sovereignty. “Whether it’s good or bad, you still need the public to see what your thoughts are,” he says. And it’s the public that he’s trying to connect with. “To me, it’s their cartoon, I just put it on paper and send it out for someone else to see,” Narcia says.

It’s a dialogue that is important to him. He says he’ll start out with an idea, but the end result often has different interpretations. The people seeing it are the true owners adding their own conclusions.

If he has an idea, he says he puts the concept down on a piece of paper or a spare napkin then works on it at home. Cartoons usually take an hour, but not all the time. “Some cartoons will take me a whole day,” he says.

For Narcia to complete a cartoon, he goes into his bedroom and shuts the door. With a collection of music on cassette tape and CD, he’ll select a soundtrack for his sessions to work to while he sidles up to his drafting table, just a few feet from his bed. “I kind of have to isolate myself,” Narcia admits.

When he’s short on ideas, he looks up just above his desk at an eclectic bulletin of sketches, cutouts, doodles and sayings. “It opens up my train of thought,” he says.

He’s not always isolated, though. Narcia lives in District 6 and is a family man with grandchildren. His family understands how invested he is in his work and they are supportive. “I thank them for giving me the time to sit here [and work],” Narcia says.

Narcia’s first ever doodles were not on art paper, but old schoolbooks. He’d get yelled at for defacing the textbooks, but it didn’t stop his fancy for art. “Back then, you didn’t have nothing but your imagination,” he says.

Narcia would use art to corral his active mind and as an escape for things that bothered him, “anything that would keep my mind busy,” Narcia says.

Before cartooning, Narcia would sell gourd paintings. Putting designs on harvested gourds was another example of Narcia’s resourcefulness, and as he puts it, “making something out of nothing.”

The GRIN comes out twice a month, with about 1,500 issues delivered in his own district, so 1,500 sets of eyes in the Westend have a chance to see what’s on his mind.

Of all the people that see his work, there is one group in particular that he wants to reach: the youth. Their futures are important to him and he wants them to be the next leaders. “Out of cartooning I hope to get their attention,” he says.

Since he started cartooning, Narcia has noticed a progression. His first pictures may not have been his best artistically, but those early drawings were his first steps in the journey. He says the first drawing “wasn’t that good,” but he appreciates it since it was, “the starting point,” for his work.

Narcia doesn’t work digitally, so the scans you see in the GRIN are straight from his desk. Since he works a lot in freehand, a single mistake could doom an entire piece. If he is unable to correct a flaw he says, “you have to throw [the cartoon] away and start all over.” Even failed cartoons are not taken for granted. “Mistakes are mistakes, and you learn from it,” Narcia says.

Narcia uses humor to visually represent his brand of satire. A recent cartoon depicted a saguaro cactus shading itself with an umbrella to deal with the intense summer heat.

Marty Two Bulls Sr., an Oglala Lakota originally from the Pine Ridge Indian Reservation in South Dakota, has been doing cartoons every week for the past 17 years, and says the role of a satirist is, “to present the truth in a funny way.”

Two Bulls, who has been published in several Native owned publications like Indian Country Today and Lakota Country Times among others, says that he uses his artwork to attract the viewer while offering pointed views. “I like to entertain people with my skills and people find the drawings aesthetically appealing. But that is the trap to get them to look at an issue or story through my eyes,” Two Bulls says.

Humor used to be a way of life for O’otham according to Narcia. Finding humor in all of life’s ups and downs is what Narcia hopes to revive. “It’s something we’ve always done in the past to make things comical,” Narcia says.

Although Narcia “had no schooling,” on art, when you see him at work, you can’t but help call him an artist. 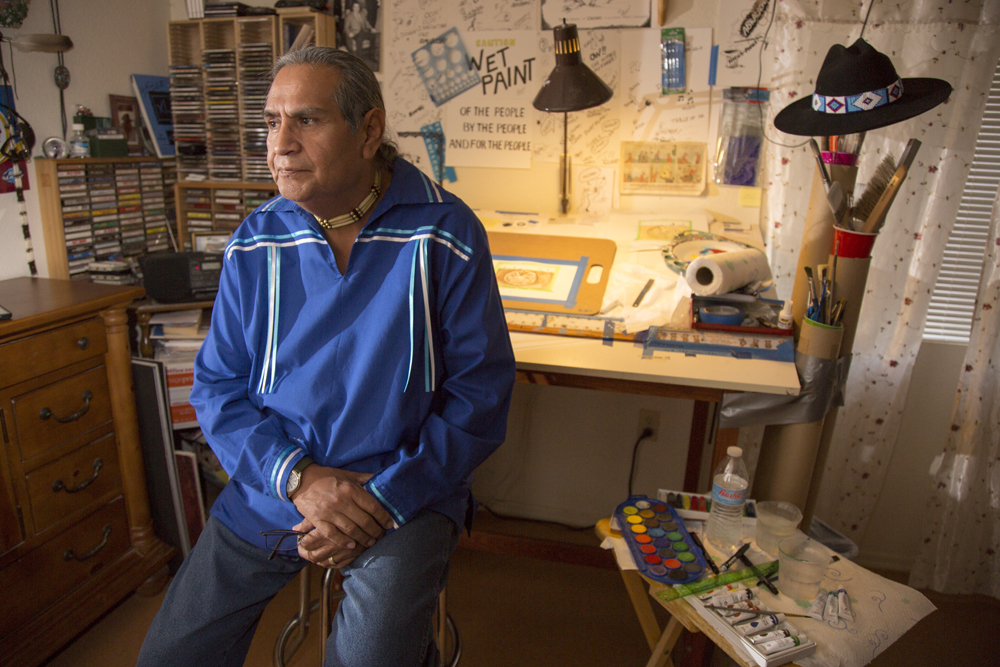 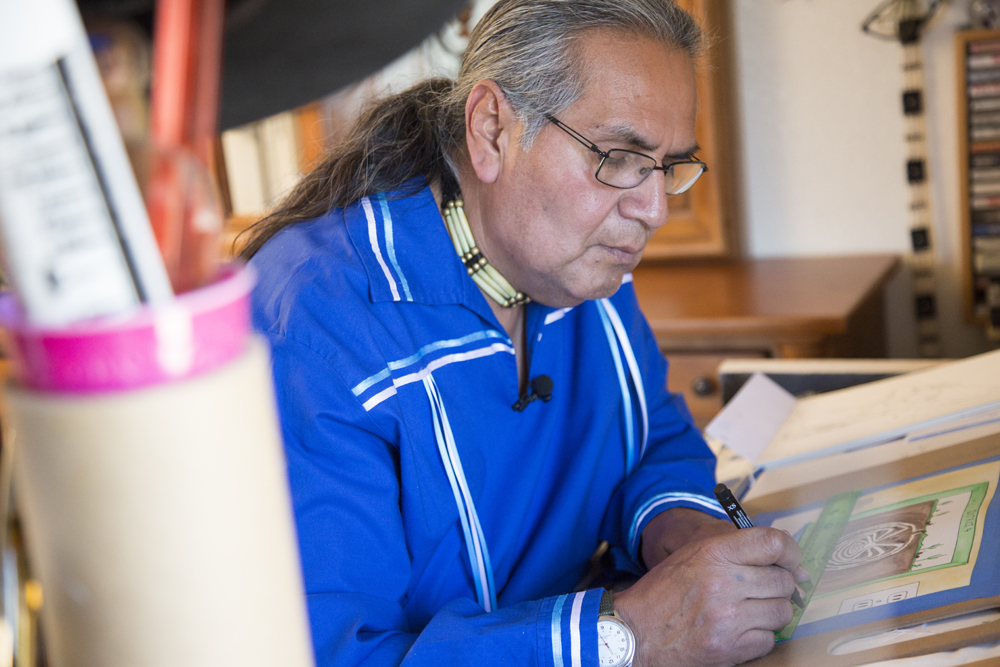