For a week before it hit we’ve mentally braced ourselves for Hurricane Harvey. But here in Houston, a bayou city that’s prone to flooding and no stranger to hurricanes, there might have been a feeling of been-there/done-that. Houstonians are not easily scared by weather and not entirely comfortable with the idea of evacuation.

So on the evening of Saturday, Aug. 26, when great gusts and fierce winds began to hammer the nation’s fourth largest city, Houston’s steely composure started to unravel. By Sunday morning the rains were severe and parts of the city had already began to take on frightening amounts of water.

The feeling that this would be something major — something altogether different from past episodes of Mother Nature’s fury — began to set in. The worst was yet to come.

I have lived in Houston since December 2008, having moved here from Hartford, Conn., where I lived for 25 years. I am a reporter and have been employed in the newspaper industry my entire adult life. I began my career in news, covering town government, courts, cops, school boards, planning and zoning — all the municipal stuff young reporters are assigned to gather and that you read about every day in your local newspaper.

As I progressed in my career at the Hartford Courant, the largest daily in Connecticut, I began to specialize in feature writing. As a features reporter and editor I have covered arts and entertainment, celebrities and Hollywood, fashion, home design, travel, and food (as both a restaurant critic and food editor). I have been the food editor for the Houston Chronicle for nearly nine years, having the privilege of covering one of the most dynamic restaurant cities in America for one of the biggest daily newspapers in the country.

Some may see food reporting as soft news. It’s not. It takes just as much reporting skills as any hard news beat.

Which is why on Sunday morning when the city of Houston set up an evacuation center at the massive George R. Brown Convention Center, I told my paper I’d head over there. It’s a 10-block walk. I got to the convention center just as the first evacuees were being unloaded off emergency trucks at about 11 a.m. Sunday, Aug. 27. They were soaked and dazed, some carrying suitcases, but most just large trash bags filled with whatever they could salvage from their flooded homes. There were mothers with babies and small kids, old people with canes, and regular men and women who were thankful to be rescued and in a dry place with food, water, and toilets.

By the end of the day when we filed our story, there were maybe 900 evacuees there; today as I write this, three full days into the country’s biggest natural disaster, there are more than 9,000 at the convention center, and counting. Dozens of other emergency shelters have since sprung up throughout the city as safe havens for those whose homes have been destroyed, whose lives are forever altered.

I live in downtown Houston in the historical heart of the city, in an iconic, 100-year old building called the Rice Lofts, at 909 Texas Ave., on the site of the old Capitol of the Republic of Texas from 1837 to 1839. Today that site is a glorious grand hotel that is the epicenter of downtown’s historic district. My building, the former Rice Hotel, is now loft apartments with an impressive grand ballroom that still plays host to many of the city’s social functions. It is here at the Rice where the city’s first air conditioned public room made the news in 1922. And it played host on Nov. 21, 1963, to a rally for President John F. Kennedy at which First Lady Jackie Kennedy stole the show when she delivered a speech in Spanish to the League of United Latin American Citizens (LULAC). The crowd was wowed.

It was the night before her husband was assassinated in Dallas.

The Rice has always been a comforting home. It’s an 18-story, fortress-like structure that seems invincible. I was told that during Hurricane Ike, which hit Houston three months before I moved here, the building never lost power. Well, during Hurricane Harvey it did after an underground transformer was deluged and blew. I returned to my apartment after covering the convention center to find our electricity and water out, and a generator operating the elevators (by the next day the emergency generator was out, throwing the hulking Rice into spooky, pitch darkness). I packed a bag and headed to a downtown hotel that I knew had reliable power. By evening, the bayou that hugs downtown proper began creeping up. I walked down the street only to see the water, spilling over the bayou banks, had come up only two blocks from my building, having already engulfed the nearby Arts District.

I’ve never been in a hurricane, but I knew this was bad, and that our city would never be the same.

My newspaper has been working around the clock to cover the catastrophe. Yesterday I canvassed downtown Houston collecting stories of travelers trapped in hotels and who didn’t know when or how they’d get home (the city’s two major airports have been shut for days). I met two gents from Scotland who made the mistake of taking a cab from their hotel north of the city to watch the Mayweather/McGregor fight at a downtown sports bar Saturday night. By the time they had finished partying the storm was thundering down and Uber terminated service. They never got home (I ran into them on the streets again this morning and they’re still in their same clothes, still desperate to get back to their hotel).

I met an economist from Paris who was returning home from a business trip in Singapore with Houston as his connecting flight. He never connected, and found himself at a downtown hotel with the prospect of a week’s wait before he can return to the City of Light. I met a businessman from Buenos Aires blissfully unaware that there was a hurricane threat when he landed in town on Thursday for a business meeting Friday. He seemed oblivious to the fact that one of the biggest natural disasters was playing out beyond the elegant lobby of his hotel. And I met a bride whose wedding for 250 was set for Saturday night as the storm angrily announced its presence. Her wedding went on; about 100 people were unable to attend but those who did found themselves at a hurricane-colored reception that would last for days.

I still have not been able to get to my office, so I’m filing remotely; my apartment still uninhabitable. I feel beyond blessed to be in a hotel with electricity, running water, a comfortable bed. Thousands are in miserable conditions in shelters; and many still in desperate need of rescue. Basic necessities are now a luxury for a great many. The suffering is incalculable. And the drama is still unfolding.

As I write this, we are only four days into the unfolding Harvey story. It’s a horrific one. But it’s also one filled with moments of grace and the beauty of the human spirit. The city’s more fortunate citizens have pitched in to do what they can for those in need. There are long lines of cars waiting to drop off much needed supplies at the convention center and other emergency shelters; regular Joes are using their big trucks and motor boats to rescue people they don’t know; churches are welcoming brothers and sisters of every faith; restaurants and chefs are using their own supplies and manpower to feed first responders and the hoards hunkering down in shelters throughout the metroplex.

Even as the waters continue to rise, so does the degree of commitment to helping the collective fellow man. Over and over I’ve heard the phrase “Texans helping Texans.” It’s true. But we’ve had help from all over the South, throughout the country, and possibly from our global brethren. It’s a collective salve on a wound that’s so enormous it’s almost impossible to comprehend how it will heal.

But it will. I have to believe that. My own journalism history has taught me so. I was on assignment in New York City on the luminous, blue-sky morning of Sept. 11, 2001. We all know what happened that day, but I saw it first hand. I spent a week in Manhattan covering many of the awful aspects of 9/11.

That was an American tragedy I thought at the time was something from which we’d never recover.

Obviously we did, emerging more informed, stronger, more united. Hurricane Harvey, which is now moving east toward Louisiana, our beloved neighbor that still bears the scars of Hurricane Katrina, has hurt this city, but not broken it. The days, weeks, and months to come I’m certain will tell a story of human perseverance. And I hope I can help write that story.

Greg Morago, who grew up in Santan, would like to thank family and friends from the Gila River Indian Community who have checked in on him through social media and have sent prayers and good wishes. He appreciates them all. You can reach Greg at greg.morago@chron.com 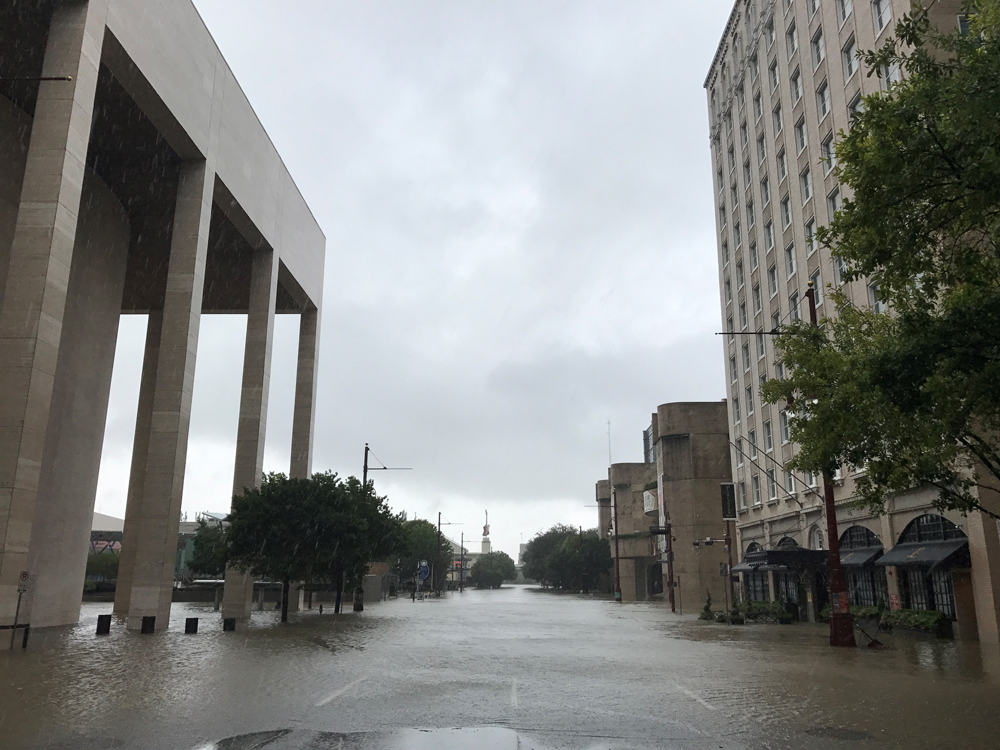 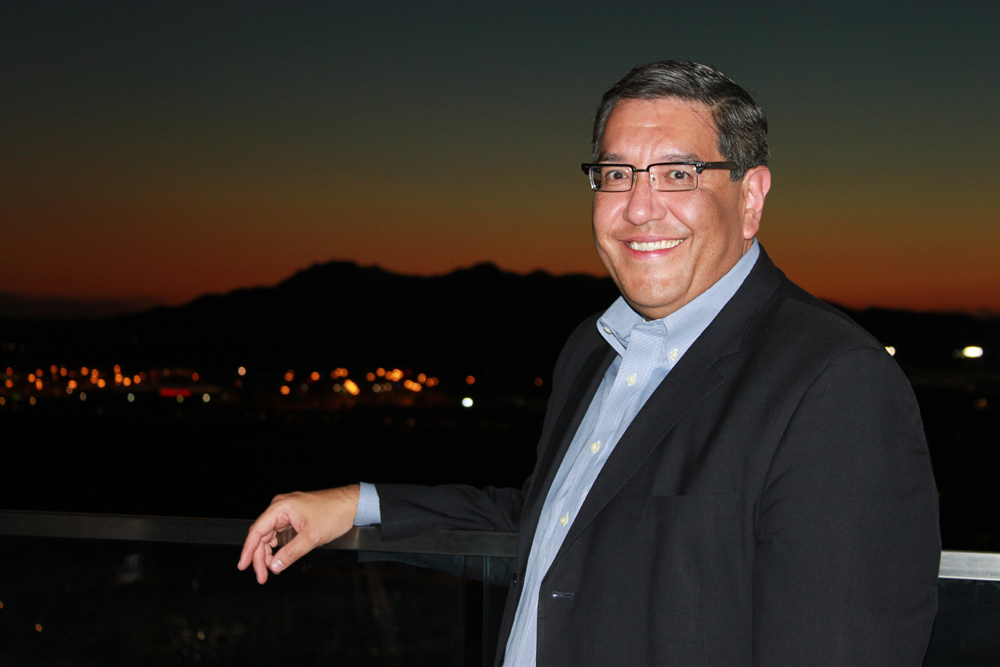 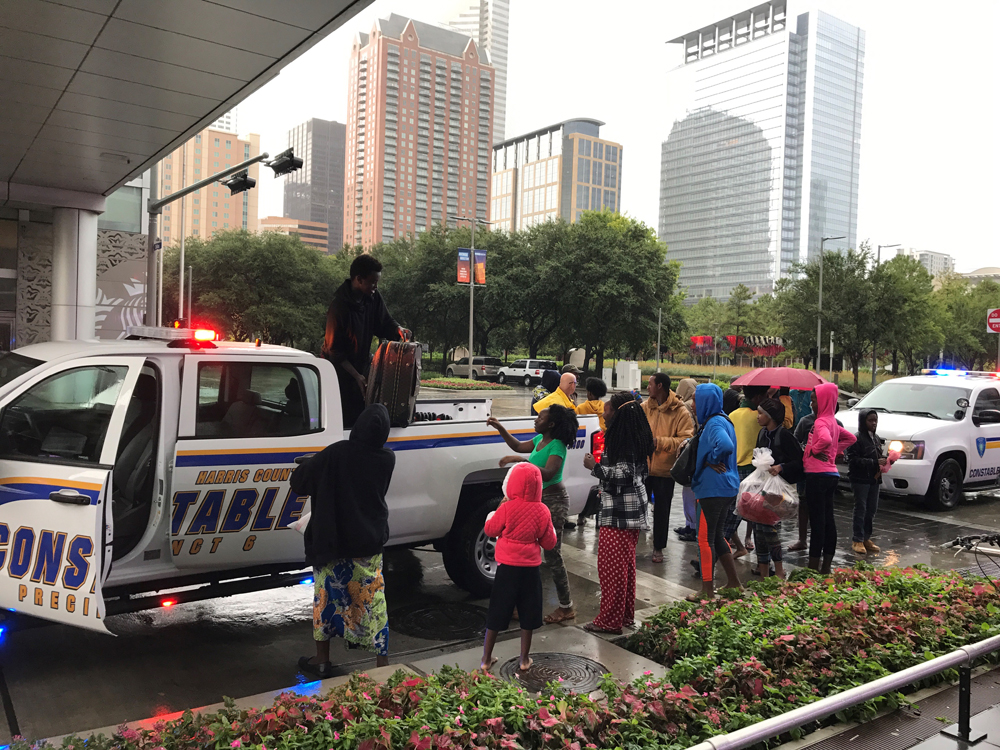