Thanks to the research of a former member of the Boston Symphony Orchestra, the Gila River Indian Community’s most endearing musician, “Big Chief” Russell Moore, graced the cover of a major trombone journal with a 14-page feature story on the Dixieland jazz artist.

Moore, who passed away in Nyack, N.Y. in 1983 at the age of 71, is featured in the July 2017 edition of the International Trombone Association (ITA) Journal, the quarterly publication of the ITA. The article, written by Douglas Yeo, long-time bass trombonist for the Boston Symphony and former Arizona State University Professor, is called “Take It, Big Chief! An Appreciation of Russell Moore,” and it outlines Moore’s background, his life as a musician, and the colorful history of the well-regarded jazz sideman to greats such as Louis Armstrong, Lionel Hampton, and Sidney Bechet.

Yeo first “met” Moore on a trip to the Musical Instrument Museum (MIM) in Phoenix. The MIM’s display of Russell Moore immediately piqued Yeo’s curiosity. Yeo said he was “stunned” because he was not familiar with the Arizona born and Native American Moore, and his accomplishments.

“Someday I’d like to find more about him,” Yeo thought at the time.

Since moving to Arizona in 2012, Yeo and his wife have embraced life in the desert and its rich Native American heritage. Coincidentally, Yeo’s Goodyear residence has a pristine view of the Sierra Estrellas; the same mountains that towered over a young Russell Moore during his early days in Komatke. “We feel very attached to this place,” said Yeo.

Yeo’s chance to learn more about Moore came quickly. “The opportunity arose for me to write a major article for the International Trombone Association Journal and that led to a very joyful exploration of Russell Moore, his life, his work and his times,” said Yeo.

Since there was no single place that had all the information about Moore, Yeo started “connecting [the] dots” of information and sources on Moore that were found scattered in books, articles, libraries, and archives around the world.

Yeo realized how humble a beginning Moore had, as the early to mid-1900s was a difficult time for the O’otham. “Water rights completely changed the Pima way of life,” said Yeo. “For these people, the change that had the greatest impact was the upstream damming and diversion of Gila River by white settlers as early as 1871 that deprived the reservation and its people of the water that was needed to continue their prosperous, ancestral work as farmers,” writes Yeo in the article.

From his birth, generally regarded as Aug. 13, 1912 (although Yeo discovered numerous other dates on several documents) to his later years in Nyack, on the west bank of the Hudson River, Moore traveled all around the world thanks to his music. “His trombone was his ticket to a very successful life,” said Yeo.

Success wasn’t always easy for a peripatetic jazz musician like Moore. Yeo was able to find all the pivotal moments in the young man’s life, such as when Moore’s father, Jose Newton Moore, passed away in 1924. Moore and his brother Everett were then sent to Blue Island, Ill., a Chicago suburb, to live with their uncle and aunt, William T. and Marie Moore. Moore left Blue Island about five years later, but not before learning to play the piano from his uncle, who was a music teacher. Moore’s early musical training continued his love of music. At an early age, as Yeo quotes from an interview Moore gave for the Rutgers University Institute of Jazz Studies, Moore was drawn to what he called, “chants of the Pimas.” An elder in Gila Crossing would sing to the children in the village and according to Moore, “that was my first awakening of music in my soul.”

While in Blue Island, Moore left his uncle to live in Chicago. Moore’s stay there held telling musical portents. One night, the 16-year-old was standing outside the Savoy Ballroom and listened to the jazz played from within. He was captivated by the music of the revolutionary trumpet player inside the club, the same trumpet player who Moore would make his mark with years later – Louis Armstrong. “I was more determined to be a jazz musician,” said Moore.

After returning to Arizona, with a brief stay in Tucson, Moore then settled in Riverside, Calif., to attend the Sherman Institute Indian School, now known as Sherman Indian High School. Moore picked up his trademark instrument, the trombone, at Sherman and even developed his unique playing style. A high school football injury forced him to play from the side of his mouth and not the textbook way of placing the mouthpiece in the center of one’s lips.

Moore stayed in Los Angeles after graduating from Sherman and, following work with various bands, joined Lionel Hampton’s band in 1935. It would be another 10 years until Moore would play lead trombone with Louis Armstrong’s Orchestra, but in that time he traveled from Phoenix to New Orleans, New York City, Texas, Kansas City, the West Coast – anywhere his trombone would take him. Yeo learned that from the 1930s to the late 1970s, Moore was frequently traveling. “He was probably on the road away from home for up to 200 or 250 days a year,” he said. “At that time, if you asked Russell Moore where he lived, he would have probably have said, ‘In my suitcase.’”

Following his initial time with Armstrong in the 1940s, Moore’s next big moment came with another Dixieland legend, clarinetist and soprano saxophonist Sidney Bechet. Moore accompanied Bechet and several other prominent jazz musicians to France for the 1949 International Jazz Festival at the Salle Pleyel in Paris. This “seminal moment in jazz history,” said Yeo, brought together traditional Dixieland artists with the emerging, contemporary bebop style. While Moore was entrenched with the traditional “hot” jazz faction, he was there when bebop pioneer Charlie Parker needed a little “encouragement” as Yeo writes. In Paris, Parker didn’t want to follow the popular Bechet on stage, but his old pal Moore, who knew the great saxophonist from their days playing together in Kansas City, offered some calming advice and Parker went on stage for what was a rousing performance.

The festival cemented Moore’s place on the jazz scene especially as a Dixieland player, and he never strayed far from his hot jazz roots. “He stayed true to that until his dying day,” said Yeo.

With his nearly 30 years playing in the Boston Symphony, along with many years under conductor John Williams with the Boston Pops Orchestra, and his time as ASU’s Trombone Professor, Yeo knows a good trombone player when he hears one. “When I hear Russell Moore play, I hear a supremely confident player,” said Yeo. Yeo said Moore’s playing was creative and brash, calling him, “a steam locomotive of the trombone.”

Moore often said that he was just an Indian off the reservation who got to play with the great Louis Armstrong, but Yeo insists that there is much more to the man than that. Moore did tremendous outreach to tribal communities all across the United States, including special visits back home to his beloved Komatke. “He was passionate about reaching young Native Americans with a message of encouragement, challenge, and hope, and he never forgot where he came from,” wrote Yeo.

Just as family from the Community once brought earth from the Gila River Indian Community to Moore’s Nyack grave, so is Yeo bringing a little bit of Russell Moore to the trombone world. “I thought writing this article would be an opportunity to bring his story outside of Arizona,” he said. With tremendous feedback on the article so far, Yeo is proud to admit that it is the first time the ITA Journal has featured a Native American. “He’s very deserving of what ever we can do to continue his memory and legacy.”

Another researcher who’s worked extensively in GRIC, and has studied Moore’s life and career, sees Yeo’s article as an important addition to recognizing the O’otham jazz man’s career.

Andrew Darling, Ph.D., who was previously director of the GRIC Cultural Resource Management Program, wrote, “Douglas Yeo has written a valuable contribution on the life and musical legacy of Russell Moore, which stands alongside the best that’s been written about the late Russell Moore’s career and music to date.”

Darling, who gives presentations on Moore, and is currently a Senior Archaeologist and Principal Investigator for Southwest Heritage Research, LLC, said that Moore holds a distinctive place in the history of jazz. “Russell Moore was unique in that he was a true working musician who witnessed the development of jazz over a career that spanned more than fifty years,” Darling wrote.

Yeo’s article has also been a way for his family to reconnect with that late relative. Jacob Moore, Russell’s great-nephew, feels that Yeo did justice in capturing his uncle’s story. “Douglas Yeo’s article captured and confirmed everything that we could only imagine that Russell’s life must have been like. Since my parent’s and grandparent’s generation, the family always had great respect for the level of success that Russell achieved with his music and talent, but it was still an abstract concept to know what it meant to be a jazz musician that traveled the world and played with the best musicians of his time,” wrote Jacob in a message.

Jacob was also impressed by all the facts that Yeo unearthed in his research. “I’m still blown away with the details that Mr. Yeo was able to uncover regarding Russell Moore’s life. Doug found information about Russell that the family never knew, like his student file from Sherman Indian School and almost every band, city, state, and country that Russell played in throughout his long career. I’m grateful for the passion and compassion that Doug put into this project,” wrote Jacob.

In the near future, Community members will have the chance to see some of Russell Moore’s belongings in a new display. The Huhugam Heritage Center previously had an exhibit dedicated to Russell Moore and is planning to make their collection available in their new upgrades. “The Heritage Center is in the design phase for major new exhibits, one of which will feature Russell Moore. His trombone will be back on exhibit, as well as the beautiful painting of him by Phil Stein, once owned by Moore, that used to hang in the Gila River Arts Center,” said Holly Metz, Senior Curator at the Huhugam Heritage Center.

According to Yeo, he is “not done,” researching Moore. While they never met, one trombonist from the opposite side of the Estrellas now feels a special affinity for the great, legendary player who was born on the other side. “I feel like I know him, and knowing him has changed me,” said Yeo. 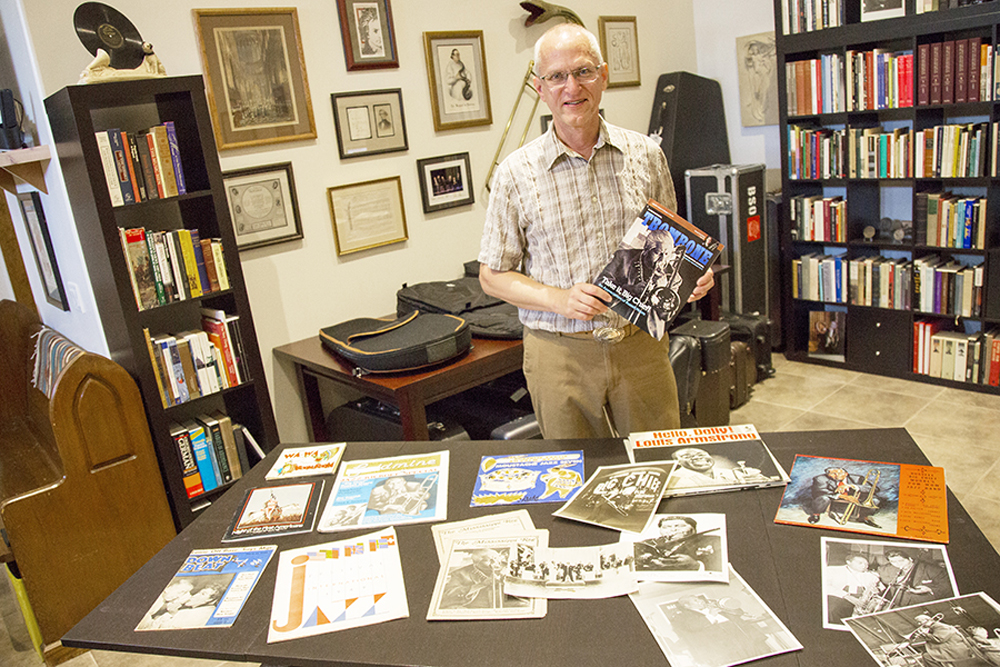 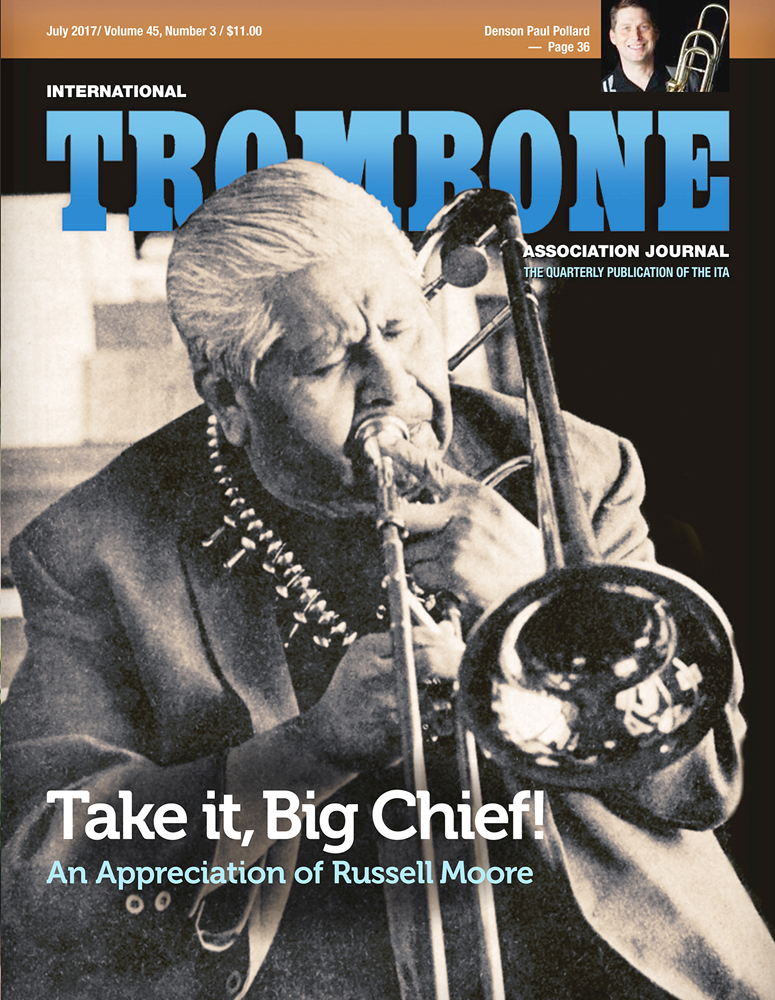