The art of managing water through a myriad of political lines and jurisdictions, while providing service to populations in time of drought conditions was up for discussion at a recent water conference.

Down in the “Old Pueblo,” Tucson, the University of Arizona Water Research Review Center held their annual conference at the student union on March 28.

Gov. Stephen Roe Lewis was present to give the keynote address about how the Community is using its water settlement for a variety of uses and how it falls in line with the conference’s theme “The Business of Water.”

The U of A President Dr. Robert C. Robbins introduced Gov. Lewis, who was on the search committee that helped select Robbins as the new U of A president.

Robbins said it is part of the universities responsibility to work with surrounding governments and businesses on developing a strategic plan on how to manage water resources from an academic perspective.

“Water is a major opportunity and major necessity for all of us to be thinking of...those are going to be some of the themes and pillars of our strategic plan,” said Robbins on the management of water resources.

The conference invites individuals from local governments, consulting agencies and universities to talk about the common idea of water management during drought conditions.

It covers the topic of how water conservation and business can go hand-in-hand to satisfy the needs of customers and local municipalities and the environment.

The understanding is, the Southwest is an intersecting point of tribal, state and local governments, that requires coming together to find solutions around a common interest related to water.

From the Community’s perspective Gov. Lewis said, water and agriculture have been the center of GRIC’s history from the time of the Huhugam, who are the ancestor of the Akimel O’otham.

He talked about the building of infrastructure to build canals that will take water from one end of the Community to the other.

“For Indian tribes and the Community, it is so critical for those tribes to be a part of [this], a part of this important era that we find ourselves,” said Gov. Lewis on the importance of tribes in water discussions.

The conference encourages attendees to be engaged and offer their ideas on how water can be used to benefit everyone, while not letting to tap run dry. “In the current state of drought and climate change, the Community considers ourselves as a Moral Compass to the protection and stewardship of Water,” said Lewis.

Robbins talked about the universities strategic plan, that will call upon the school’s many academic disciplines to lead the academic part of adapting to the current state of water resources.

“This is not a futuristic discussion. It’s simply the convergence of biological, digital and physical sciences and [you] to be a world expert around water,” said Robbins.

Gov. Lewis said for tribes theres another side of the coin that must be understood around water, because it is an integral part of the traditions, cultural teaching and way of life.

“I am honored to be following in the footsteps of my father, Rod Lewis, in his advocacy for the protection of Indian Water Rights and ongoing stewardship of water throughout Arizona and all of the Southwest,” Lewis said.

He said, “Water plays a meaningful role within our traditions, our own value systems and even today to the point of self-determination.”

Part of Gov. Lewis’ presentation covered water marketing, long-term storage credits, and how tribes like the Community look to using their water rights on their traditional lands.

Through the use of water credits and banking, it enables the Community to use its water right claims, allows them to sustain their water infrastructure and agricultural heritage.

One development Gov. Lewis touched on was the opening of a newly built lined Casa Blanca canal, which he said is one example of how water is brought to the heart of the Community. 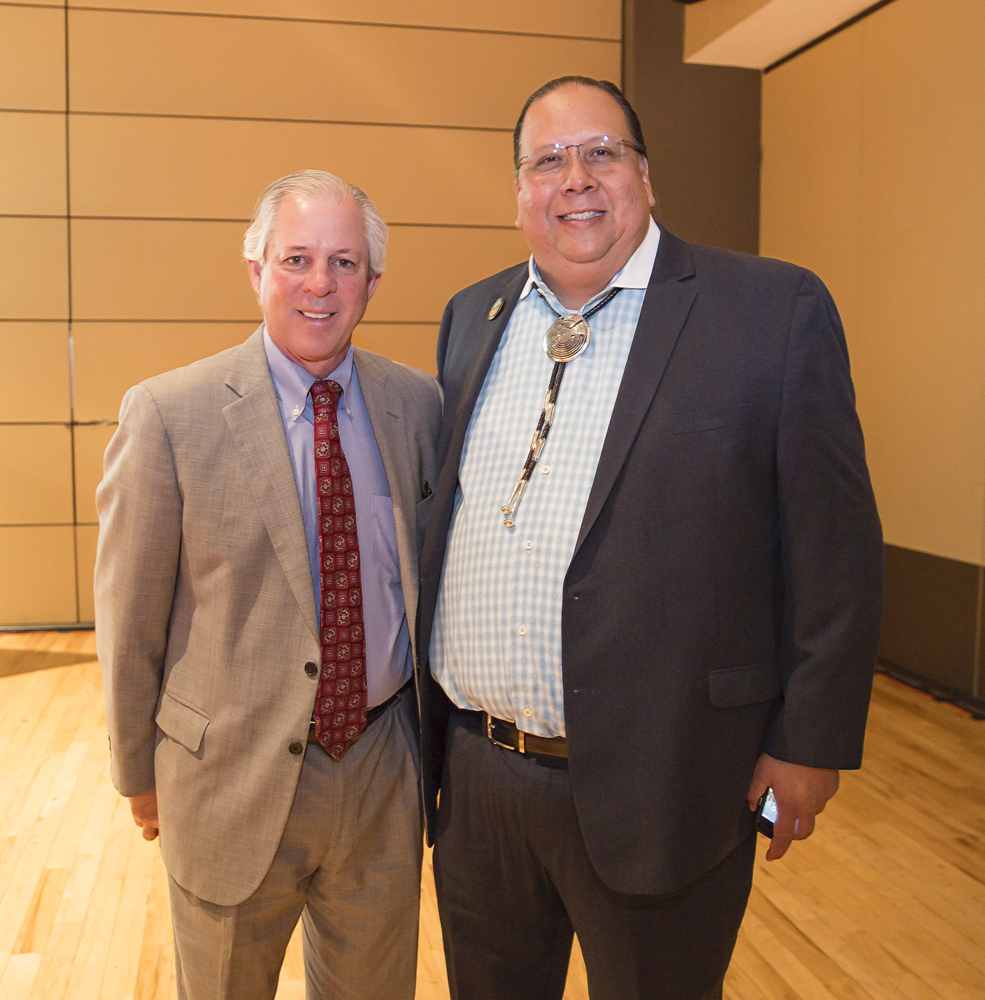 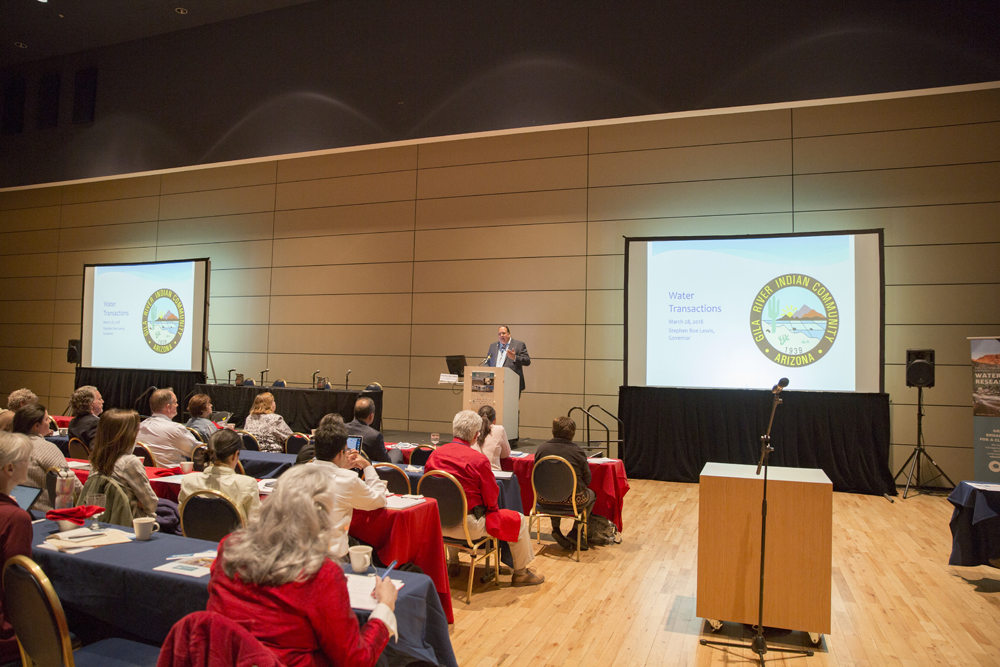 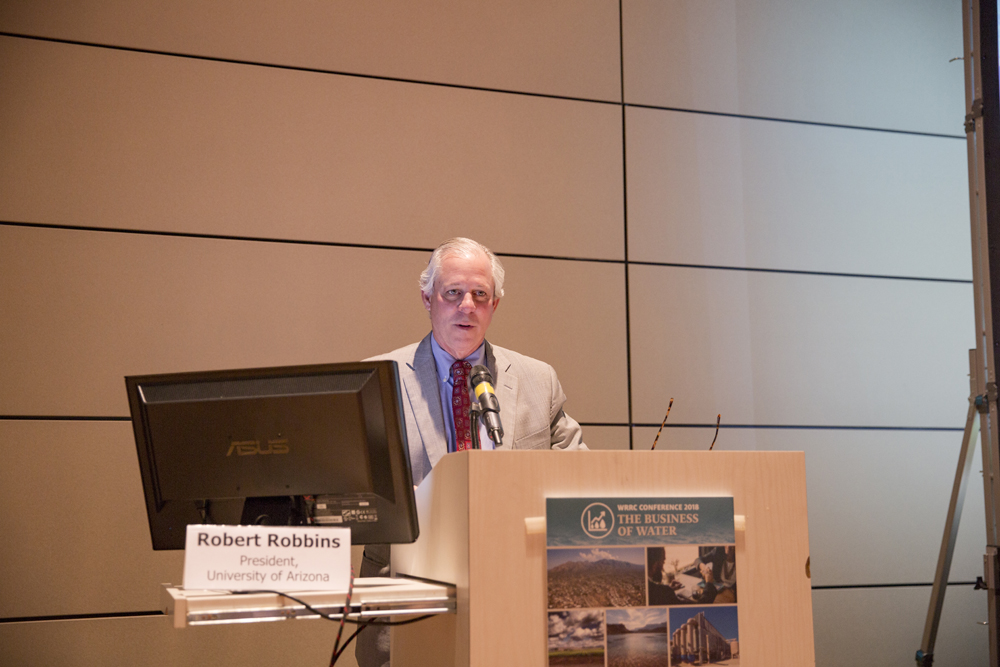