On July 5, six youth from the Hashan-Kehk Teen Club traveled to San Diego, Calif. to represent their community and culture at the United National Indian Tribal Youth Conference. “This conference is a time to meet new people and learn about different cultures from across the world. I am always happy to express my own culture through clothing, song, and dance,” stated Brianna Knox, president of the Hashan-Kehk Teen Club. This year, two of our Teen Club members, Amanda Pablo and Alaina Santos, had the opportunity to participate in the UNITY Fashion Show to showcase their traditional clothing. “When they asked me to participate in this fashion show I was kind of hesitant at first, but after realizing this is a time to represent my heritage I couldn’t say no,” expressed Pablo.

This was Alaina Santos and Dwayne Leos’ first time attending the conference and they were very excited. “Coming from a small community, I never really had the chance to meet other people from other tribes and/or cultures, but thanks to the District Two Recreation Department and the Hashan-Kehk Teen Club, I was given the opportunity to travel to a new place and gain new experiences,” said Santos.

“Culture night was a fun show and hopefully next year our Teen Club will be able to participate in it,” stated Leos. With over 2,000 Native American youth in attendance, members of the HKTC had the chance to meet many new people from places such as Oklahoma, New York, and even Hawaii. While spending time in California, the youth had some extra time to explore San Diego such as Old Town San Diego and Mission Bay. “The UNITY Conference is always an excellent experience for youth and I hope to see more youth groups at the conference next year in Orlando, Florida,” shared Junior Pancott, Hashan-Kehk Teen Club Secretary/Treasurer. 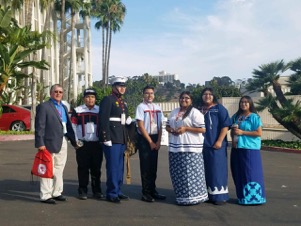