Historic Huhugam petroglyph boulder returned to the Community after 84 years

Boulder sat on LDS Mesa Temple grounds before its return

Arriving on the back of a large flatbed truck, a special delivery of a culturally significant object arrived at the District 2 Hashan Kehk Multipurpose Building, decades after being removed from the Community.

Weighing-in at around 9,000 lbs, or a little over four metric tons, a Huhugam petroglyph boulder, was delivered back to the Gila River Indian Community by the Church of Jesus Christ of Latter-Day Saints on Nov. 10.

The boulder’s return to the Community, comes as a bit of surprise, because its removal was unknown at the time in 1934. Now, with the delivery of such a significant object, it closes one chapter and opens another for the future of the Community.

Barnaby Lewis, Tribal Historic Preservation Officer, said is it important to preserve the religious and cultural integrity of the Community. Returning the boulder is one way educating Community members.

“We try to make an effort to educate them about cultural protocols, that are associated with situations of this matter,” said Lewis.

For 84 years, the petroglyph boulder sat on the LDS Mesa Temple grounds, until a recent landscaping project created an opportunity for the church to return the object. “To the best of my knowledge, the Community was not aware until the church administration reached out to them about returning the boulder,” said Lewis.

Lewis said, in the 1930s the Pima Indian Agency superintendent A.H. Kneale had control of Community affairs and allowed the boulder to be removed.

Spiritual runners including Community member Jiivik Siiki led the way as the large heavy-duty trucks brought the boulder to the site near the District 2 Multipurpose Building. Before the trucks came to a rest, the runners made several offerings of salt as they circled the boulder, with basket dancers and singers, with gourds in hand, singing traditional Akimel O’otham songs.

When the boulder was finally settled into place Marvin Thomas,  District 2 elder, commented on the boulder’s return to the Community and how they prepared for its arrival. Thomas said they examined the boulder on the temple grounds before it was returned. “It’s really special to have something like this to return back to its home,”  said Thomas.

Now that the boulder has been returned, Community members can visit the site and pay their respects in their own way, and view the intricate inscriptions, only those before us could explain. 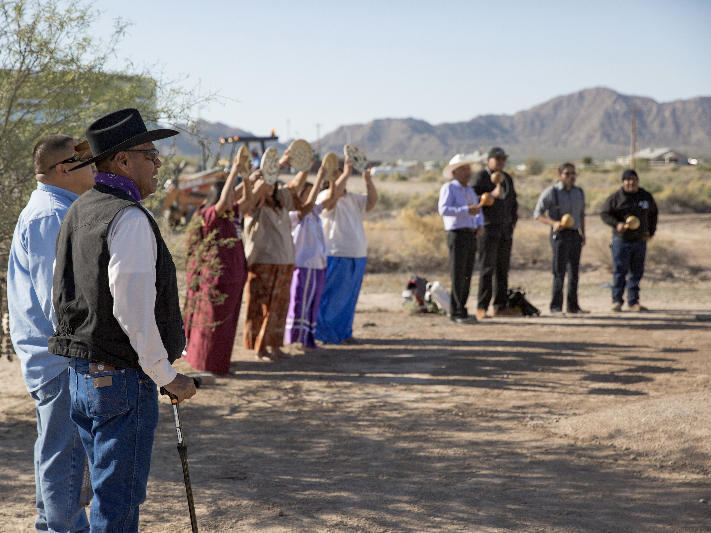 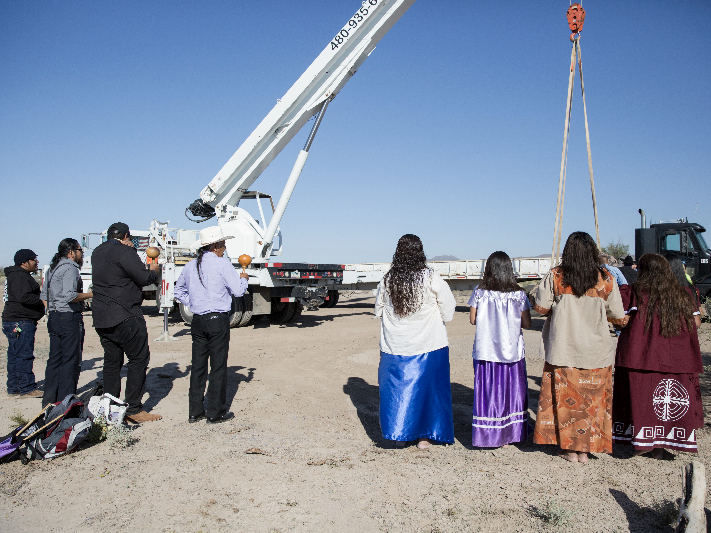