Remains of fallen Marine from Korean War returning to Arizona

The daughter of a Marine, who fell to enemy fire during one of the most grueling battles of the Korean War, plans to bring his remains home after 68 years.

Laverne McAfee, aged 74, talked about her father Sgt., Johnson McAfee Jr., who was killed in the Korean War during the Battle of the Chosin Reservoir on November 28, 1950.

Johnson was a member of the F Company, 2nd Battalion, 7th Marine Regiment, 1st Marine Division, whose responsibility was to hold an outpost perched among the mountainous valley in a place called “Fox Hill.”

McAfee said her father joined the Marines at the age of 23 and attended Tucson Indian Training School, graduating in the spring of 1942.

Later that year, Johnson would also be given a certificate of admission into the University of Arizona College of Liberal Arts as a freshman for his academic merits, but a call to serve in the armed forces led him to the United States Marine Corps.

Military service wasn’t new to the McAfees. Two of her uncles, Cameron and Wilmer, served in the armed forces.

This wasn’t the only war Johnson found himself fighting in, he previously served in World War II as a Marine in the Pacific Theater.

After WWII, Johnson served in the Marine reserve until he was called up to deploy to Korea.

“He was a Marine through and through and I was real proud, because he would carry me while we’re in town and have his uniform on,” said McAfee of her late father.

She said most of her childhood was spent living with her grandparents, while her dad was in the service, and that it was always a special moment to see her father while he was home.

McAfee said the day her father was killed in action was a day of many emotions, because it was also her birthday, which made the loss even more tragic.

Officially known as the Battle of the Chosin or (Changjin) Reservoir, it was one of many military campaigns between United Nations forces and the Korean People’s Army and the Chinese People’s Volunteers Force, over the region.

The CPVF offensive on the Chosin Reservoir was to drive the UN forces out of North Korea.

Johnson and his fellow Marines were tasked with holding an outpost known as “Fox Hill,” which was named after the company they were assigned to.

The Marines were responsible for protecting a crucial pass for friendly forces to make their way back to the North Korean coastal port of Hungnam.

Using the cover of darkness, the CPVF commenced their attack on the Marines, which was sprung in the early morning hours of Nov. 28.

This battlefield tactic would prove common place as the Marines fought the bitter cold in blizzard conditions up to mid-December, as U.S. forces and their UN allies made their way to safety from the advancing CPVF.

McAfee said the Marines were in contact with her grandparents, who had been notified of his death and the field burial he was given.

After tensions eased on both sides with the signing of the Armistice Agreement in 1953, the following year negotiations were underway with UN officials, (primarily the U.S. government) to recover the remains of servicemen that were missing or unaccounted for.

Through Operation Glory, which lasted from August to November of 1954, in accordance with the Armistice agreement signed in 1953, both sides exchanged the remains of servicemen that were buried/recovered from their last known location.

All but one of the 848 recovered remains that were received from North Korea through Operation Glory were buried at the National Memorial Cemetery of the Pacific, with one interned at the Tomb of the Unknown Soldier in Arlington National Cemetery in Virginia.

Although the efforts to recover the remains from the battlefield were accomplished, for many decades the process of identifying the remains was a monumental effort in itself.

Late last year the Defense POW/MIA Accounting Agency exhumed Johnson’s remains and through a series of thorough forensic examination were able to identify him and others.

During a special meeting at the Wild Horse Pass Development Center, McAfee said a Hattie Johnson from DPAA and other representatives provided further information about her father’s remains and compiled a book of material documenting the identification process.

McAfee was presented with a set of medals that included his service in WWII and the Korean War, including a Purple Heart, Presidential Unit Citation with one bronze star for the 1st Marine Division’s actions in Korea on two different occasions.

McAfee was at a loss for words when she received the information, and was also a bit skeptical. But now she realizes that it is truly her father’s remains and the mystery is now over.

“My father has been gone 68 years and that void has never been filled, because of the memories that I have of him,” she said.

“I remember sometimes we would go to church and somebody would ask ‘who is she’ and my grandmother would say ‘oh that’s Johnson McAfee Jr.’s daughter,’” said McAfee.

She said her father had carried himself well and was respected by others for his service in Marines and was a very bright individual in his studies while attending school in Tucson.

“I never, I never thought in my wildest dreams that I would be the one, to bring him home, because I thought he was lost forever,” said McAfee.

She is thankful for the support she received in identifying her father’s remains, and without it the whole process would be overwhelming.

“I’m 74-years-old and I feel very honored and I feel blessed that I will be able to have this experience…I loved my father very much,” said McAfee with a tinge of sadness and enthusiasm for what is to come.

She said, “I want my grandchildren to know the legacy that they have...I want my grandkids to look upon this experience and see learn about what their grandfather sacrificed.”

McAfee said that when she brings his remains back to Arizona, that she would like to have them buried at the National Military Cemetery of Arizona, located in North Phoenix.

There, Johnson will be given full military honors, which will be carried out by a Marine honor guard to perform the ceremonies.

Looking back on all the other Community members that went off to serve in the armed forces, she said their patriotism has shown through the selfless sacrifices that they have made to defend the Community and the nation. 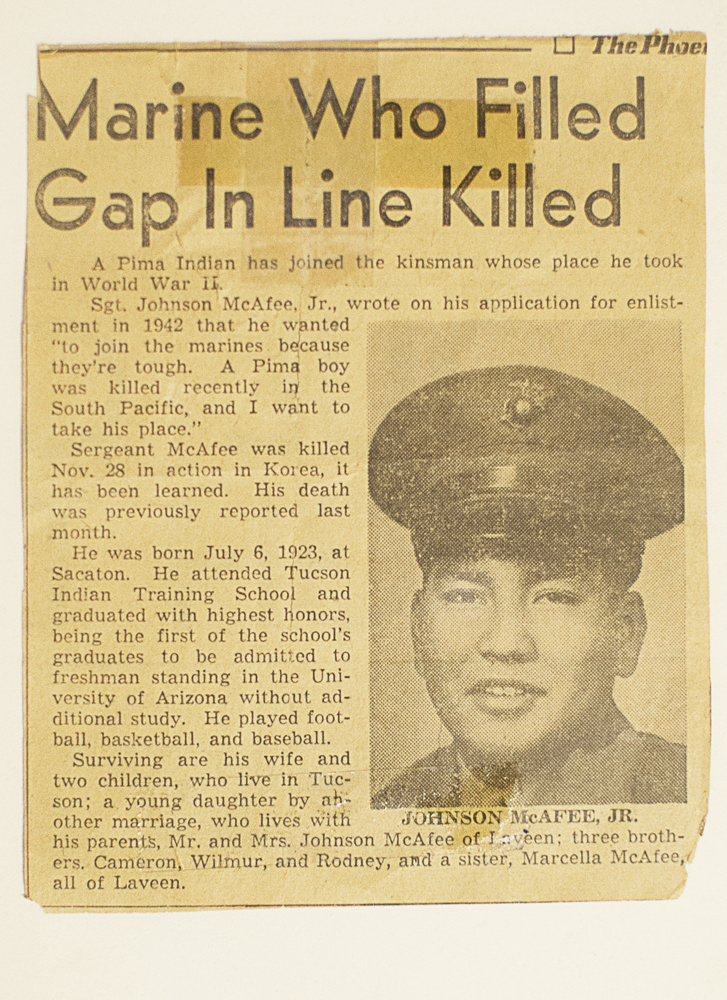 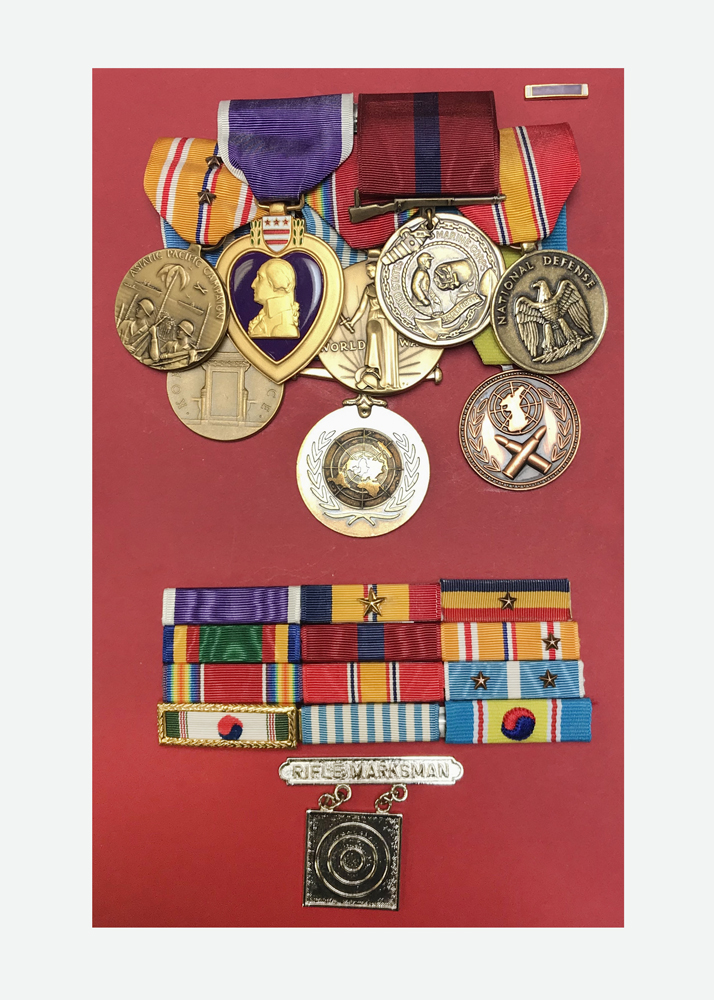