The two-day conference featured roundtables, panel discussions and individual presentations that all focused on the outcome of the 2016 United States Presidential election that has rejuvenated life into white supremacy and nationalist movements and in what ways Native Americans are affected in this time in history.

One common issue the two tribal leaders discussed was land impacts that affect their respective communities. Gov. Lewis discussed how the Community is against the building of the Loop 202 freeway construction that would cause destruction to South Mountain, which the Community holds as sacred.

Chairman Rambler discussed the same issues that the San Carlos Apache Tribe is fighting in regards to the Oak Flat area near Superior, Ariz. A foreign mining company wants to mine the area, which would have negative impacts on the environment. Chairman Rambler said many Apaches hold the area as sacred, stating that his own paternal family has its roots in the area.

“It’s important to acknowledge whose land this all began on,” said Gov. Lewis referencing modern day civilizations on traditional Native homelands. “It’s important that we continually don’t let the mainstream or those in power, administration, forget that moving forward. It’s important to not lose ourselves to institutions.”

The two leaders discussed how in this day and age, with the new Presidential administration, it is important for Native Communities to cooperate with one another and stand together. The leaders joked that had it been 200 years ago, the two would not have been sitting on a panel together because traditionally, the Apaches were enemies of the Akimel O’otham.

According to Gov. Lewis, in the 2018 federal budget the Trump Administration slashed out 12 percent, which is an estimated 400 million dollars, from Indian Country. Also, pointing out that some court cases are reaching the Supreme Court in regards to the Indian Child Welfare Act, which gives Tribes a strong voice when it comes to child custody of Native children. Very rarely do Native Americans face well in Supreme Court cases.

Native voting numbers in the Presidential election were low during the 2016 election. Although Native voting has been low, Chairman Rambler said that even after voting takes place, tribal leaders have to take action on their end to speak with those in office.

In both cases, Gov. Lewis and Chairman Rambler agreed that the continued education of their youth is going to be key moving forward as Native communities.

San Carlos has recently developed their own local college to “grow our own,” and educate tribal members in order to fill positions at their hospital, gaming enterprises and jobs within their government. Chairman Rambler said the idea came from urging from elders wanting to have tribal members fill key positions within their community, rather than hire from the outside. Hiring within your own community cuts down on unemployment but also has key officials with an understanding of local communities and challenges Natives face.

Gov. Lewis reference a cohort that is allowing Community members to attain their Master’s degrees from the confines of the Community borders.  He sees this group as the beginning of a cultural revitalization as they are striving to bring back the O’otham neok and himdag (language and culture) in every day school curriculum.

“Tribal leaders wear many hats,” said Gov. Lewis. “You have to sometimes stand out of the mainstream and status quo, we have to look beyond. What is our community going to look like, what does our community need to survive in the next 20, 30 or 100 years? What are we going to preserve and what is important to our people that we want to preserve? Our language, our culture, our ceremonies, our natural resources, our sacred sites and how do we go about doing that? Those are our big picture responsibilities that we have to do as tribal leaders.”

The panel was beneficial in opening up the voice of tribal leaders, speaking and educating those in attendance on their Communities’ fights and struggles. It created a dialogue that is not always possible when tribal leaders are out advocating for their tribes at national levels. What it did shed light on is that no matter what Native community you are from, the struggles each tribe faces are similar in ways that are able to unite together. 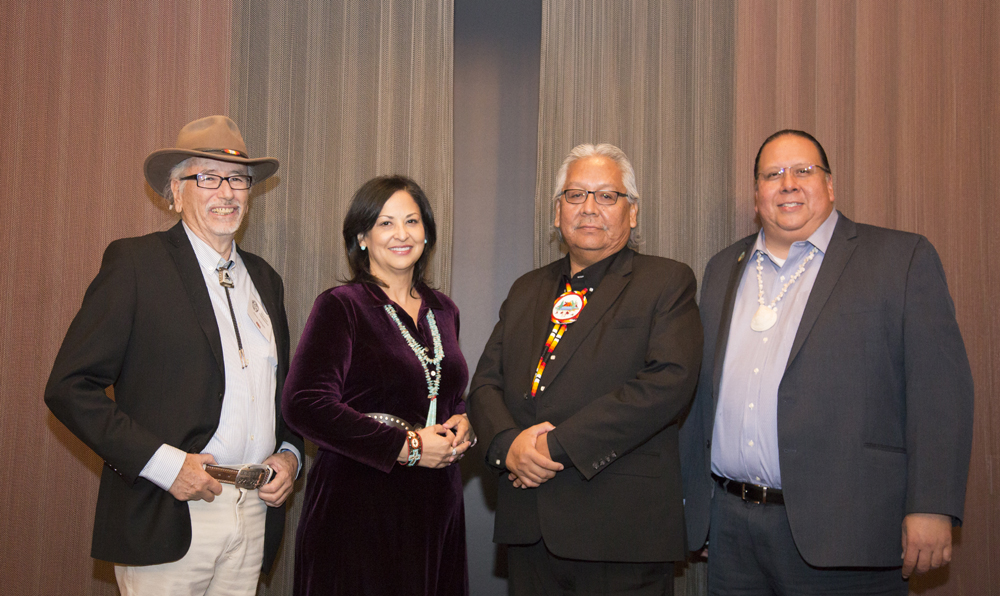