On December 6th of 2017 the HHC’s Language Program held a Language Class Appreciation Event at the District 6 Learning Center to celebrate the completion of the fourth Akimel O’otham language class. On that day twenty-five ‘e mamshchamtham (students) were given certificates of completion, celebratory gifts, and shared a meal together to commemorate the ending of the twelve week course. The class was taught by Mrs. Barbara Parsons along with other language teachers and assistants.  The course was titled “En Ve:m Ki:kam” and focused on teaching everyday language of introducing themselves and family. During the course the class learned how to say useful phrases like Sha:p pen che:gig? (What is your name?), Sha: che:gig heg em je:j? (What is your mother’s name?), Sha: che:gig heg em o:g? (What is your father’s name?), He’ekia ap ‘i vepenag? (How many siblings do you have?), Ba:p hasko chikpan? (Where do you work?), Sha:chu ap s-ho:hith? (What do you like?).  The HHC’s Language Program is working towards creating more Community based language classes like this one in the future for District 6 as well as for the other Districts.

As we start off the western society New Year, we realize that O’otham have become very modern and up to date on the latest technologies.  We have gone from ordering items from the Sears & Roebuck catalog to ordering items on E-bay and Amazon.  Back in the day O’otham had to wait several weeks as the items they ordered reached them by snail-mail or the UPS delivery truck.  Nowadays our items that we ordered on-line are brought to our door step in a matter of days.  One thing that will never go out of style is going to the grocery store. When we were young and our food supply had begun to run low mom and grandma would take inventory of the items that we needed and created a shopping list. “Sha:chu ach thaichu?” (What do we need?) Grandma asked.  Mom and us kids had gone throughout the kitchen and took an inventory of food items that had been running low.  Mom or our older sister responded with “Thaichu ach heg ba:bas!” (We need potatoes!).  Grandma had taken a moment to make notes then she said. “Pegi, haschu e:p?” (Very well, what else?) This went on for other food items such as “vi:b” (milk) “chuchul nonna” (chicken eggs) “nalas vadag” (orange juice) “koji chu:kug” (bacon). While this had been going on our big brother had been sent to our uncle’s home with a note that asked our uncle to take mom and grandma to the grocery store in his station wagon.  As soon as uncle had pulled up in the front yard grandma said. “Tho vo:p!” (Let’s go!) When we had arrived at the grocery store grandma would say, “I beith heg kalith!” (Get the shopping cart!). Throughout the shopping visit grandma said “Hema be:in heg vi:b!” (Get the milk!). We went throughout the aisles of the grocery store and picked out the items we needed until our shopping cart was full. Once the groceries had been rung up, grandma asked mom “He’ekia namkig?” (How much does it cost?). Mom would then translate the dollar amount into Akimel O’otham.  Grandma would then count out her “lial” (money) and paid for the groceries. Most O’otham these days pay with their debit, credit or EBT cards.  The next time you plan on making a trip to the grocery store keep it in the language as much as possible.  Speak with your Elders about the O’otham names for food items and practice our language every day.  Our word match will challenge you to match the food items with their picture! 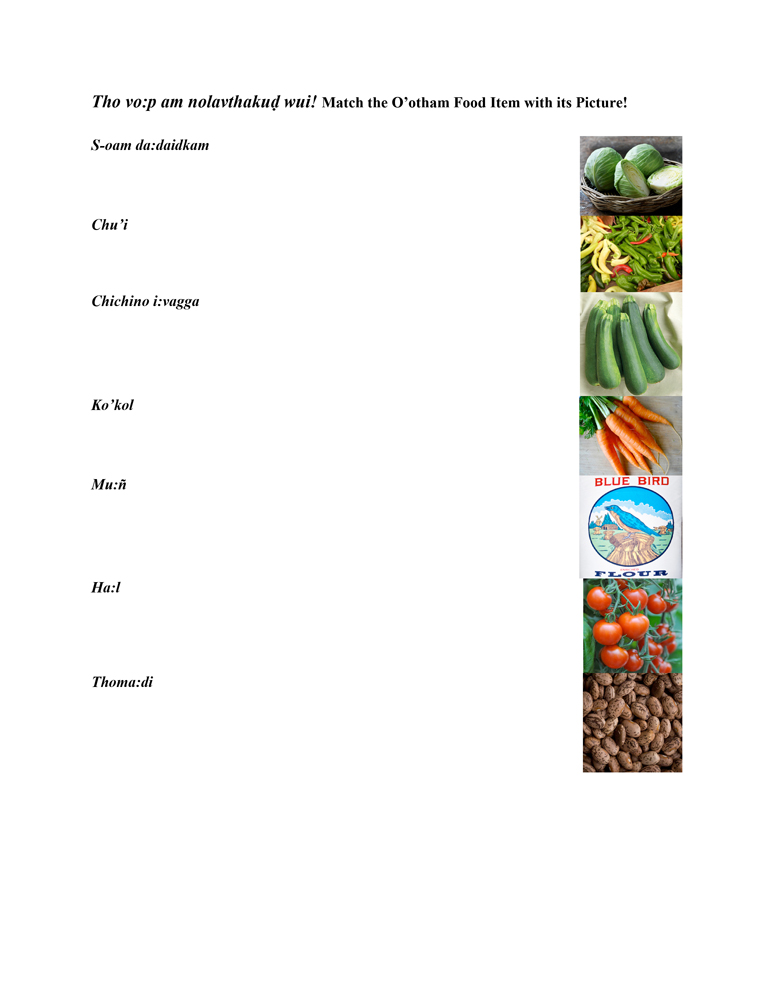 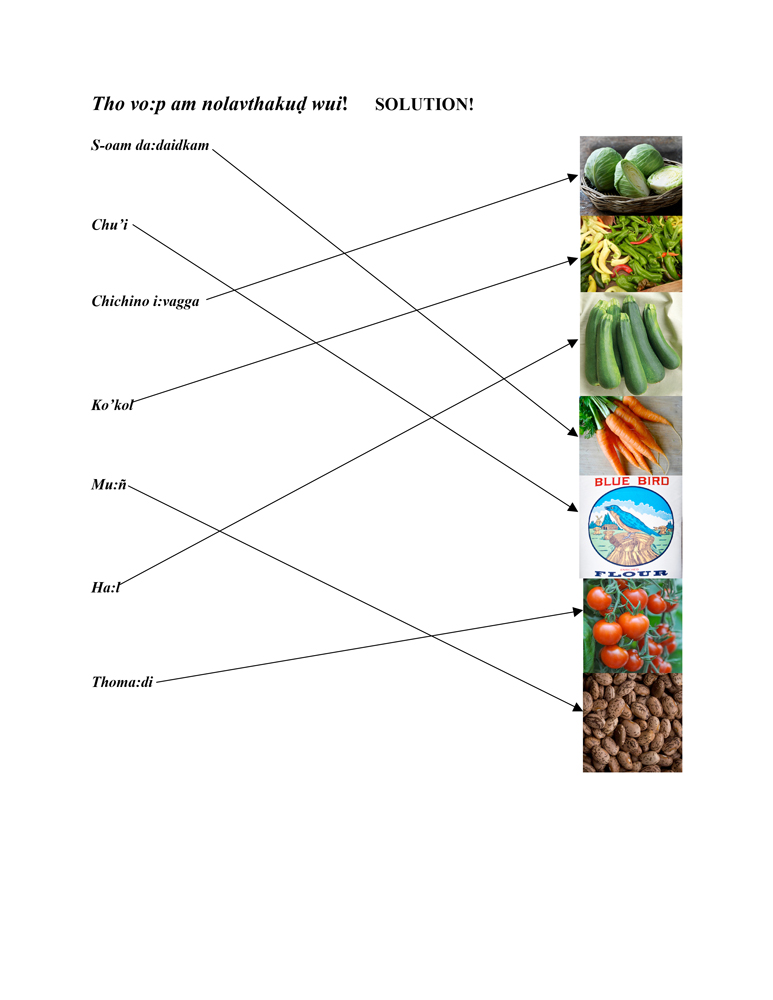