The Komkjid of South Mountain

Just north of Gila River Indian Community’s sprawling desert landscape, among the peaks and valleys of South Mountain’s native desert vegetation, a lone Sonoran Desert Tortoise slowly but steadily walks its way towards home, a small earthen burrow dug into the bank of a dry wash.

Her name is Mary Lou, which is what Daniel Leavitt, Herpetologist for the Arizona Game and Fish Department (AZGFD) has been calling the hard-shelled reptile for the past three years, which is when he first began tracking the tortoise.

Mary Lou, who is one of six Sonoran Desert Tortoises monitored by AZGFD in South Mountain Park, is around 30 to 40 years old and about the size of a bowling ball that has been cut in half. Her domed shell is the color of the surrounding desert, a mix of gray and brown, which has been adorned with several mounds of gray epoxy to which a radio transmitter is attached. Peeking out from a protective shell is her small angular head dotted with two large eyes, a pair of pinhole sized nostrils, and a formidable beaked jaw.

Tracking Mary Lou and the five other tortoises is part of a research project conducted by AZGFD to monitor the animals and their behavior in the large mountain preserve, which is inhabited by just 30 to 40 of the animals.

“It is a monitoring effort dedicated to learning as much as possible,” said Leavitt. “We knew that tortoises where here, we didn’t know their distribution along the mountain. In fact, in previous efforts, we had only found them up on top where the radio towers were. We didn’t know there were tortoises all along the ridgeline, we assumed they were there, but we have records now that go beyond into the Gila River Indian Community,” he said.

One of several reasons the AZGFD is monitoring the tortoises is due to the recent development of the Loop 202 South Mountain Freeway. Leavitt said the highway will go around the western and southern boundaries of South Mountain, with certain areas of ridgeline planned to be blasted with explosives.

Monitoring the tortoises allows AZGFD to see where the animals are traveling, foraging, mating, and burrowing.

For one tortoise in particular, which has created a burrow in the path of the highway’s development, the rumble of construction will eventually come too close for comfort. Luckily for the shelled reptile, AZGFD is keeping track of its location and will relocate the animal before construction begins.

“There is a tortoise that right now and for the last year, has been regularly burrowing within the right-of-way,” said Leavitt. “The expectation is that because we have a radio transmitter on it, we know where it is, and it should be fairly easy to keep out of harm’s way.”

According to a study published in 2011 in ZooKeys, a zoological peer-reviewed journal, the desert tortoise, which for the past 150 years was thought to have been just one species, was found to be two separate and distinct species based on DNA evidence as well as biological and geographical differences.

While both tortoises are physically similar, their environment and habitat is what really defines their species, and in the desert of southern Arizona, the Sonoran Desert Tortoise reigns supreme.

The arid climate of Arizona is a harsh environment, which the Sonoran Desert Tortoise has become uniquely adapted. The desert tortoise has evolved to thrive in such a habitat by eating foods containing moisture like grasses, herbs, flowers, fruit, and even cacti.

“(Tortoises eat) everything from fruits, which are available occasionally like prickly pear fruits, to many of the desert forbs (herbaceous flowering plants).

Leavitt said predicting a tortoise’s behavior can be difficult, because just as personalities vary from person to person, so does tortoise behavior. There can be a tortoise that doesn’t like to leave its burrow, while another tortoise may rarely spend any time there at all.

“It is hard to generalize (tortoises) because (they) are all unique, but there are some general patterns. Through the year, we have two distinct activity periods where tortoises are out and moving. Usually we associate that with winter or spring rainfall events, and the summer monsoon rainfall,” he said.

During the summer monsoon season, desert tortoises will mate and nest, which is a time of great activity for the animals.

“Anytime from July until September when we get ample rains, they are going to be out, (and) there is a lot of social interaction,” said Leavitt. “That is when males will often times get into battles, and when males will be mating with females.”

Baby tortoises hatch in the late summer and are extremely vulnerable to predation due to their small size and soft thin shell. Leavitt said the chances of a small hatchling tortoise making it to adulthood are slim, with fewer than three to five percent of the animals surviving to adulthood.

“As they get smaller in size everything eats them,” said Leavitt. “The hatchlings are eaten by Gila Monsters, coyotes, and different birds of prey, but as they grow older there are fewer and fewer predators that can really handle them.”

There is one predator though, that is able to readily handle the large shelled reptiles; the mountain lion.

“For adult tortoises, mountain lions are probably one of the most common predators,” said Leavitt. “The reason a mountain lion can handle an adult is because they can basically crack the shell open and rip off the top of it so they can get to the meat inside.”

Even though mountain lions may be one of the tortoises most formidable foes, it is humans that endanger the animal the most, and according to Leavitt, the danger lies in human infrastructure, specifically, roadways.

It is changing the tortoise’s natural environment that harms them most, said Leavitt. And because they are able to move large distances, with some animals traveling over eight miles in a short period of time, they often come across roadways filled with traffic.

“That is one of the biggest concerns for conservation in my eyes, is the amount of fragmentation across the landscape just by roads,” said Leavitt. “It has created a problem for Sonoran Desert Tortoises. Yearly, we get handfuls of tortoises reported or photographed, or even brought to the department that have been run over, and that is not their fault. This is what they have been doing forever, they are just moving the way that they do,” he said.

Sonoran Desert Tortoises have lived alongside the O’otham and their ancestors for thousands of years, and have been walking the deserts of southern Arizona for even longer, 10 to 20 million years.

Traditional O’otham stories of tortoises have been passed down from generation to generation, with even the Tohono O’odham Nation’s capital, Sells, having a connection with the shelled creature.

The following is an excerpt from a 1994 article in the Tucson Citizen titled “How the villages got their names” written by Paul L. Allen:

“Sells has been called Sells only since 1918, when white bureaucrats decided to honor Cato Sells, another white man and the commissioner for Indian affairs in Washington, D.C. from 1917 to 1920.

Before that, historians will tell you, this place was called Indian Oasis, because of a spring-fed pond that provided a sure source of that precious commodity, water.

But that, too, was a white man’s name for the place.

Before that, for as long as anyone could remember, this place was called Komkcud E-wa’osidk. Literally translated, it means ‘Turtle Wedged.’ Albert Alvarez, a Tohono O’odham linguist and co-developer of the official writing system for the O’odham language, explained why.

Legend, said Alvarez, has it that people living in the vicinity discovered a large turtle wedged between two rocks, unable to escape. They freed the trapped reptile.

Whether they attached any symbolic or religious significance to the event isn’t known, but the place thereafter came to be known as Turtle Wedged village.”

In the O’otham language the word for tortoise or turtle is the same: komkjid or Komkcud in the Alvarez-Hale orthography.

To this day tortoises are frequent visitors to households throughout the Community. Community members in District 1 say that in years past, a lone desert tortoise annually visited Black Water Community School. Then one day, the reptile just walked off into the desert and was never seen again. There are also numerous stories, many from District 6, of tortoises stopping by a family home and becoming a sort of free-range pet.

Which brings up the important issue of tortoise conservation within the Community.

If you have spent a good amount of time on the roadways of rural southern Arizona, then you’ve probably seen a tortoise or two slowly crossing the road. Due to the tortoise’s lumbering gait, it can take quite a while for them to cross even two-lane roads, making them extremely vulnerable to fast-moving vehicular traffic.

According to Russell Benford, GRIC Department of Environmental Quality Senior Wildlife Biologist, one of the most important things motorists can do for tortoises spotted on the road, is to notify GRIC Rangers and GRIC DEQ.

He said people should be careful if they attempt to move the animals themselves, not just because of passing traffic, but due to the tortoise’s defensive response to being picked up.

“It is very likely it will urinate on whoever picks it up. It is very concentrated and stinky,” said Benford. “(The urine) is a deterrent from predators like coyotes, which would drop the tortoise.”

He said tortoises use their urine in order to keep themselves from being harmed, but they are using a precious resource to get to safety, water. If they cannot find another source of water quickly, they could be in trouble.

He said tortoises also can carry diseases that can harm people, like salmonella. So it is important to use care and wear protective gear when handling the animals.

If you do help a tortoise cross a road, said Benford, it is important to make sure you move it to the side of the road it was moving toward, not where it was coming from. “There is a reason they were crossing that road in the first place, so they will probably try to cross that road again,” he said.

While many local families have taken in Sonoran Desert Tortoises as pets over the years, it is best to just leave them alone. But, if you are collecting or hunting the animals, it is illegal.

“If you are caught collecting a Sonoran Desert Tortoise in Arizona, there are fines associated with that,” said Leavitt. “There is no hunting license or permitting process for the (AZGFD) to allow that. It is illegal,” he said.

However, if you would like the opportunity to legally care for a tortoise, AZGFD has you covered. The department provides a Sonoran Desert Tortoise adoption service where captive reptiles are available if you have the appropriate backyard and equipment. 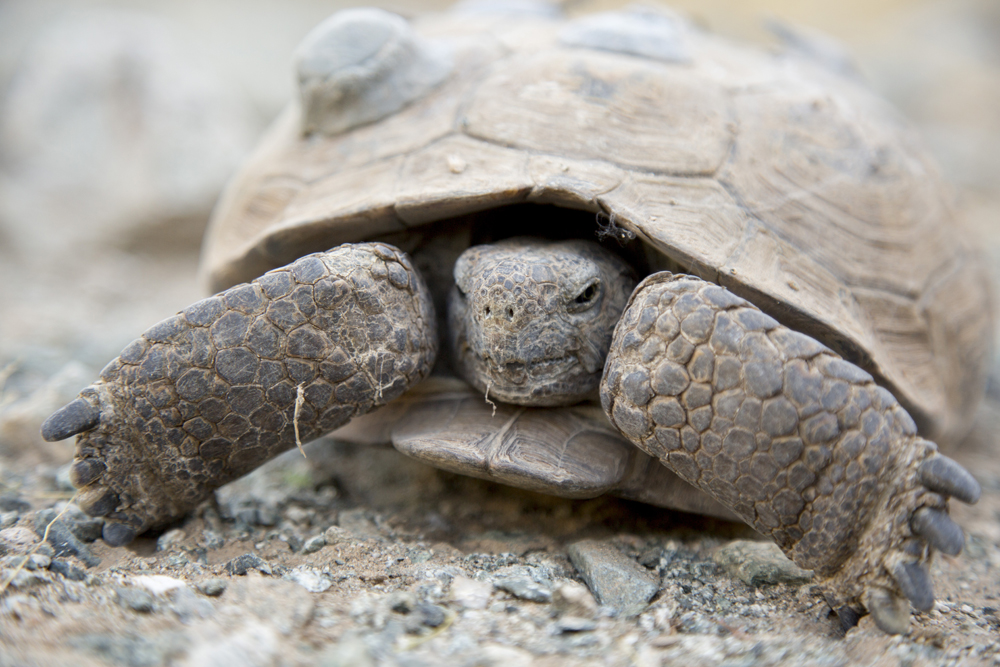 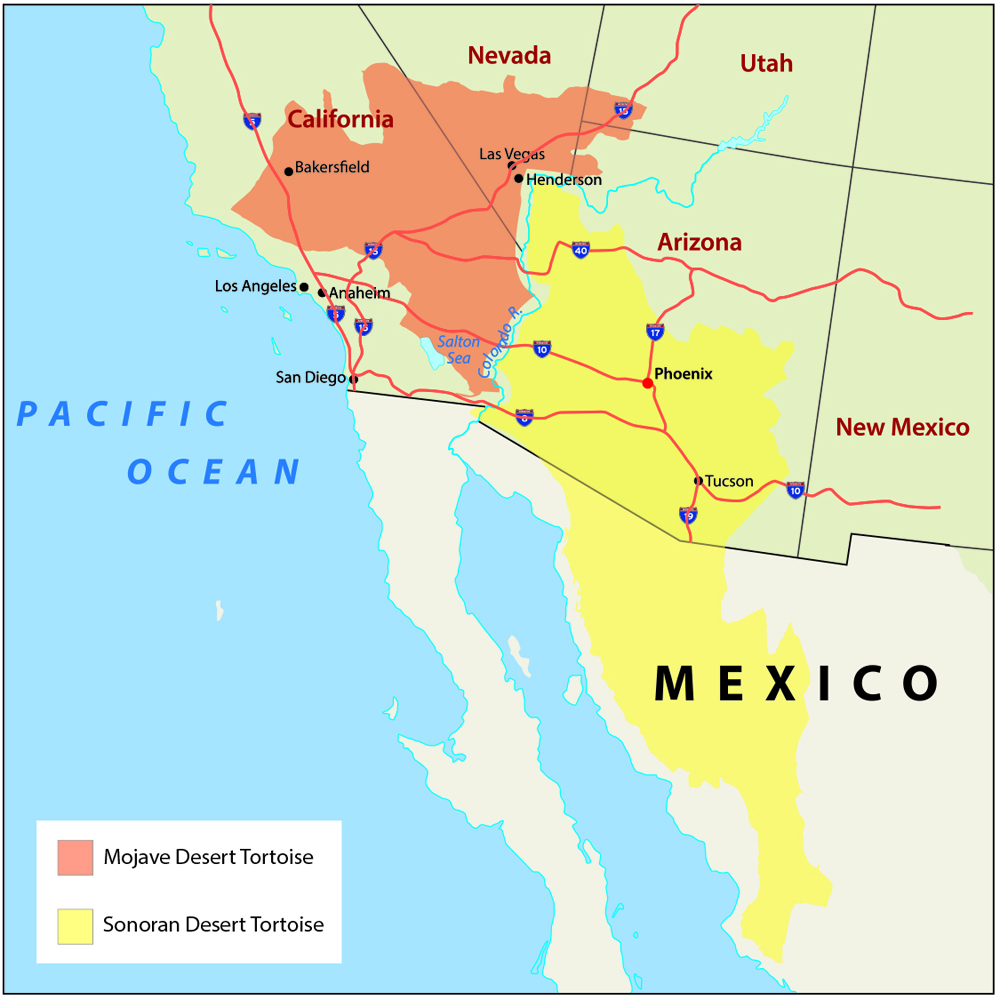 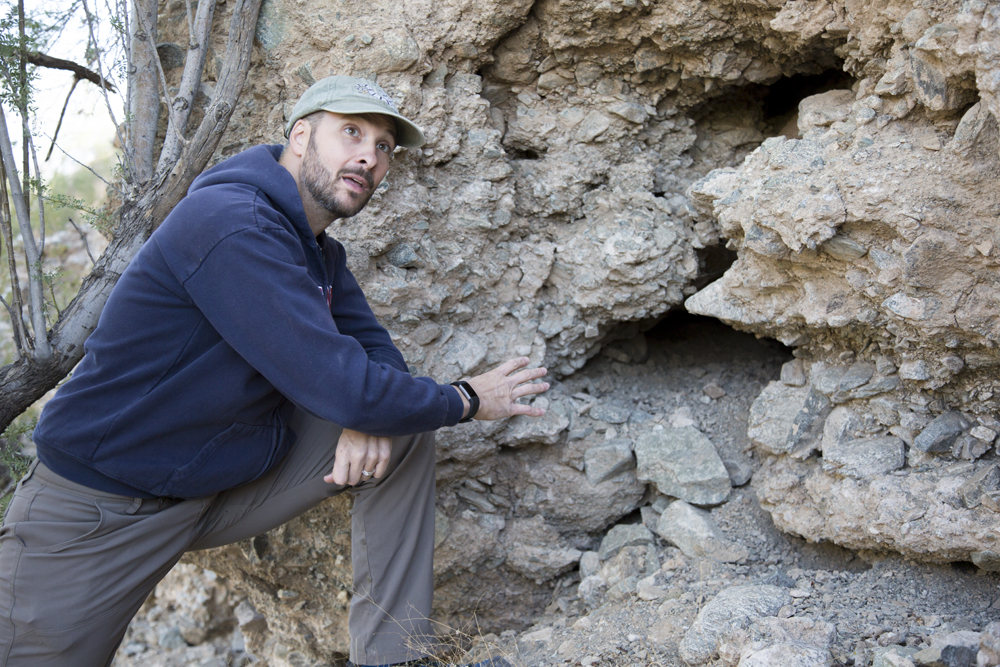