Exactly 73 years after six Marines, including the late Ira H. Hayes, raised the flag on Mount Suribachi at the Battle of Iwo Jima, veterans invited to the Gila River Indian Community raised their glasses to those brave men at a banquet on Feb. 23. On the night prior to the annual parade commemorating the anniversary of the Iwo Jima flag raising, the Ira H. Hayes American Legion Post 84 hosted veteran groups from across the state and the country for a dinner, which included special ceremonies, remarks from tribal leadership, acknowledgments and prayers at the Boys & Girls Clubs of the East Valley Gila River Branch – Sacaton in District 3.

Commander Chesley Juan Jr., was introduced early in the agenda, and he welcomed the visitors, particularly those from out of state. Juan recounted his research on the Battle of Iwo Jima for an essay he wrote as a sophomore in high school. According to his research, he said there were many accounts of bravery exhibited by Hayes during his service. However, Hayes’ perception of his actions differed from the records. “He did not perceive himself as a hero, as we all know,” said Juan. Hayes distinguished himself through acts of heroism including saving a fellow Marine’s life. Juan honored Hayes by saying what the late Marine never magnified: “Ira Hayes was a hero.”

The food was served, after an opening prayer by Lt. Gov. Robert Stone, and the Remembrance Table Ceremony, which was followed by an address from keynote speaker Robert Balwanz. Balwanz, who served in the Army with GRIC veteran Gary Anderson, spoke of his father who was wounded at the Battle of Iwo Jima on March 5, 1945.

Gov. Stephen Roe Lewis was a guest speaker and he thanked Post 84 and the Ira H. Hayes Auxiliary Unit 84 for hosting the veterans.

He also recognized Wayne Allison and other members of Hayes’ family who attended the dinner. When referring to the men and women who served in the military Gov. Lewis said, “You are truly our heroes.”

Before singing a traditional song to honor the veterans, Lt. Gov. Stone said, “I strongly believe in the power of our people,” and “whatever we do, it’s a part of us, and especially in the military.”

In year’s past at the dinner, visitors have presented the Community with gifts and offerings. This year, a representative from the American Legion Mathew B. Juan Post 35 presented Post 84 with artwork of Juan, the first Arizonan killed in World War I.

David Bean, Puyallup Tribe of Indians (Tacoma, Wash.) council member, and members of the Puyallup Tribe veteran group, presented Gov. Lewis and Lt. Gov. Stone with gifts of salmon medallions. The Puyallup are a fishing people and the salmon hold important significance in their history and culture.

Assisting during the event were 10 Casa Grande Union High School students, who volunteered including several members of the CGUHS Amerind Club. 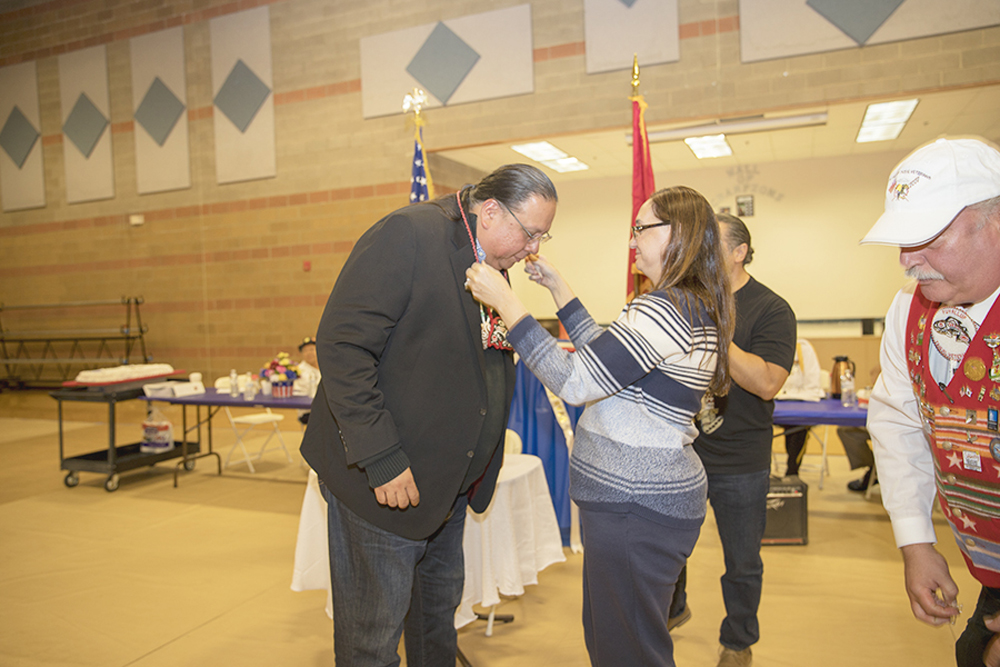 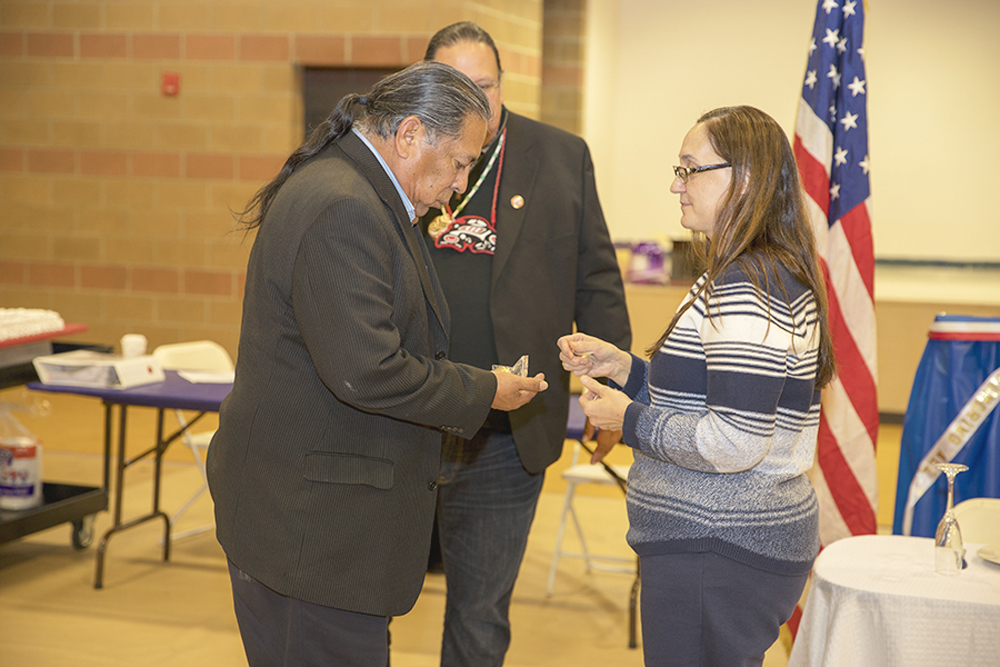