Veterans from posts across the state and country, descended on Sacaton for the 73rd Anniversary of the Iwo Jima Flag Raising parade and ceremony held in Sacaton, Ariz. on Feb. 24.

Tony McDaniel, Ira H. Hayes American Legion Post 84 Adjutant, said that members of the post worked hard over the past seven months organizing the annual event, and were glad to see it finally come to fruition.

McDaniel said, veterans groups from all over came out to recognize the raising of the American flag over Mount Suribachi on the island of Iwo Jima and of the service of veterans in recent wars.

Thousands of spectators lined the sides of Casa Blanca Road from Skill Center Road all the way down to the Matthew B. Juan – Ira H. Hayes Veterans Memorial Park where the grandstand was located.

The rumble of a chrome two-engine propeller driven B-25J Mitchell soared over the crowd and three brightly painted yellow PT-17 Stearman biplanes signaled the beginning of the parade and flag-raising ceremony.

Babbitts was in the U.S. Army as a Chief Warrant Officer 3 and was part of the Army Corps of Engineers with the water distillation division, he landed on Iwo Jima 5 days after the Marines took the island.

Spectators cheered and applauded passing floats filled with veteran dignitaries from across North America and a variety of tribal nations.

As the parade wound down, the large crowd of spectators was invited to make their way across the street to the Ira H. Hayes/Matthew B. Juan memorial park where master of ceremonies welcomed the audience to the Community.

There, Lewis said, that it is an honor to host so many veterans groups from across Arizona and the country, that they are deserving of respect and gratitude for making the trip to the Community for the parade.

He said they carry so many qualities that are often forgotten today like, service, sacrifice, pride, commitment, honor and courage.

“Each of our families has its stories of a son who went off to war and served with distinction, a daughter for who the service meant more than self, a relative we never got the chance to know well, but who we regard with deep pride every single time we hear their name,” said Lewis. “In my family, that man is Corporal Richard Lewis.”

Lewis said that while he had never met his grandfather’s brother, he was an inspiration to him throughout his life and that like many families of the Community, they have sent a loved one off to war.

“My granddad’s brother enlisted [during] World War II…[and] served as a member of the First Marine Division Reinforced,” said Lewis. “[He] was also a dear friend of Ira Hayes.”

“Richard Lewis fought until a mid-January day in 1943 when he was killed in action,” he said. “His death marked the first time a Pima Indian was killed in the Pacific Theatre in World War II.”

Lewis said that several months later in a letter to his own family, Ira Hayes said he had been moved by Lewis’s willingness to give his own life to protect the country.

Just two years later, on Feb. 23, 1945, Hayes, along with Harold Schultz, Michael Strank, Franklin Sousley, Rene Gagnon, and Harlon Block, would raise the U.S. flag over the island of Iwo Jima, he said.

“Ira Hayes stands as a giant to generation upon generation of Gila River Indian Community members,” said Lewis. “We, the fortunate many, who have the chance to stand here today because of the service of men and women like Ira Hayes, who fought courageously, who risked everything so that we can be free.”

He said Hayes was and will always be a true hero, despite shying away from the title of “hero’ for his courageous actions at the Battle of Iwo Jima as is the title for all Community members, who enlisted into the armed forces and have fought in wars since then.

“To each of you veterans here today, to the members of the Ira Hayes family, and my family, and all the many Community families who send loved ones off to…war let me close by saying this,” said Lewis. “We stand in awe of what you have accomplished and your commitment, and each of us working in our own way to bring honor to your service and to continue on in your footsteps. Our community will never forget you and we will do everything in our power to support our veterans and to live up to your example.”

After the event’s dignitaries concluded their speeches, five wreaths were blessed and placed at each of the veterans memorial park’s monuments; the Iwo Jima, Matthew B. Juan, Purple Heart, Women veterans, and P.O.W./M.I.A. monuments. 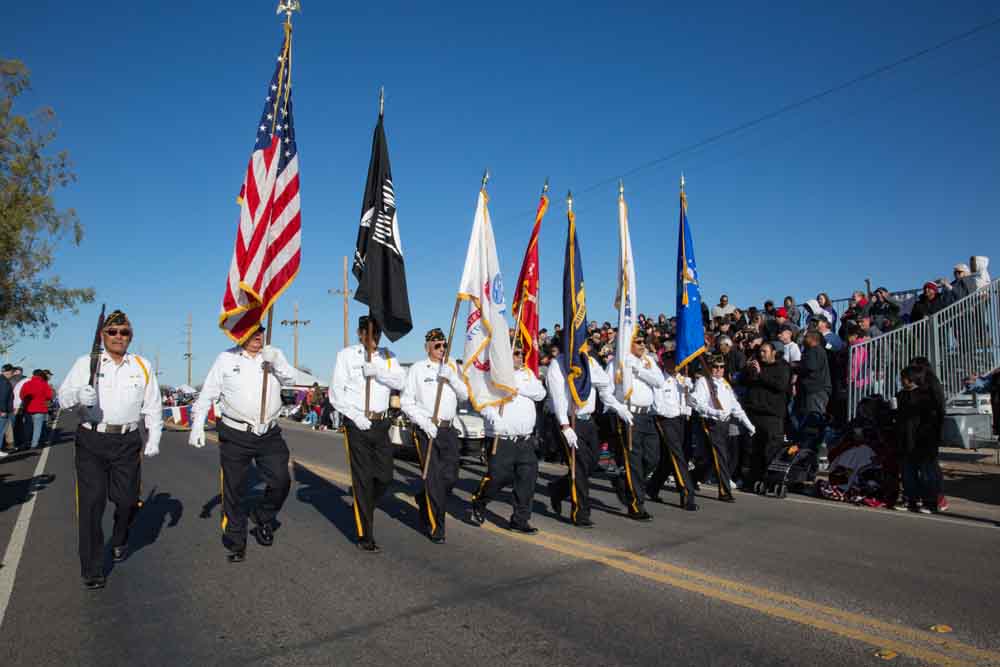 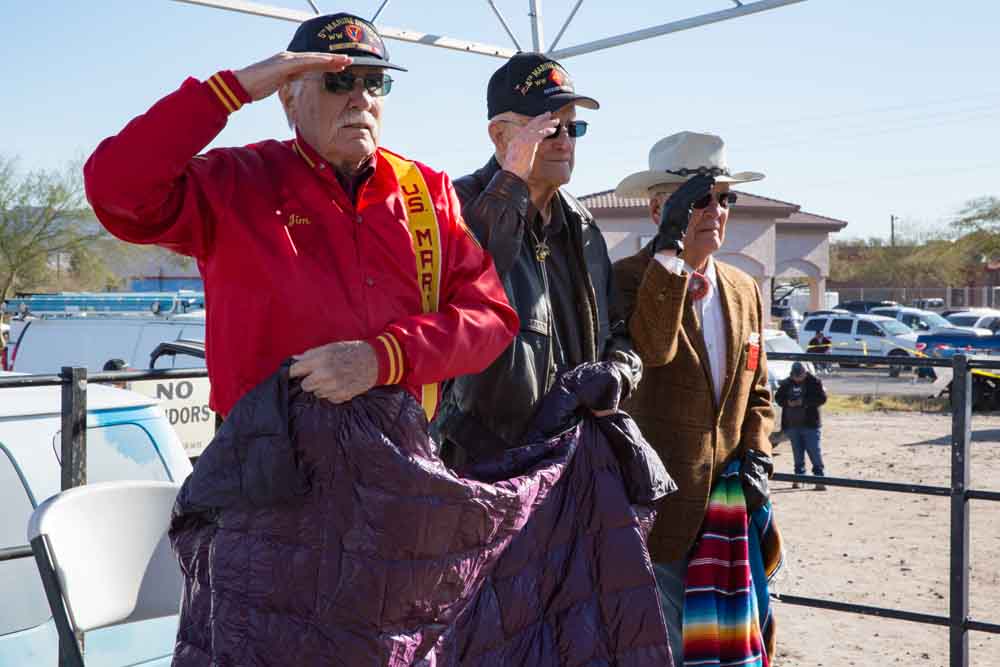 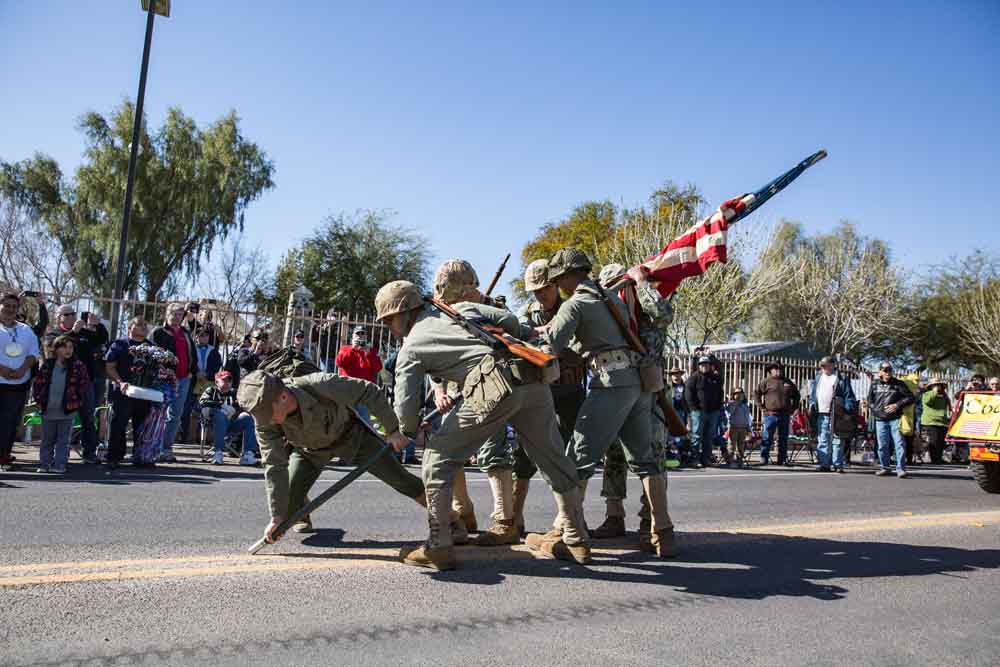 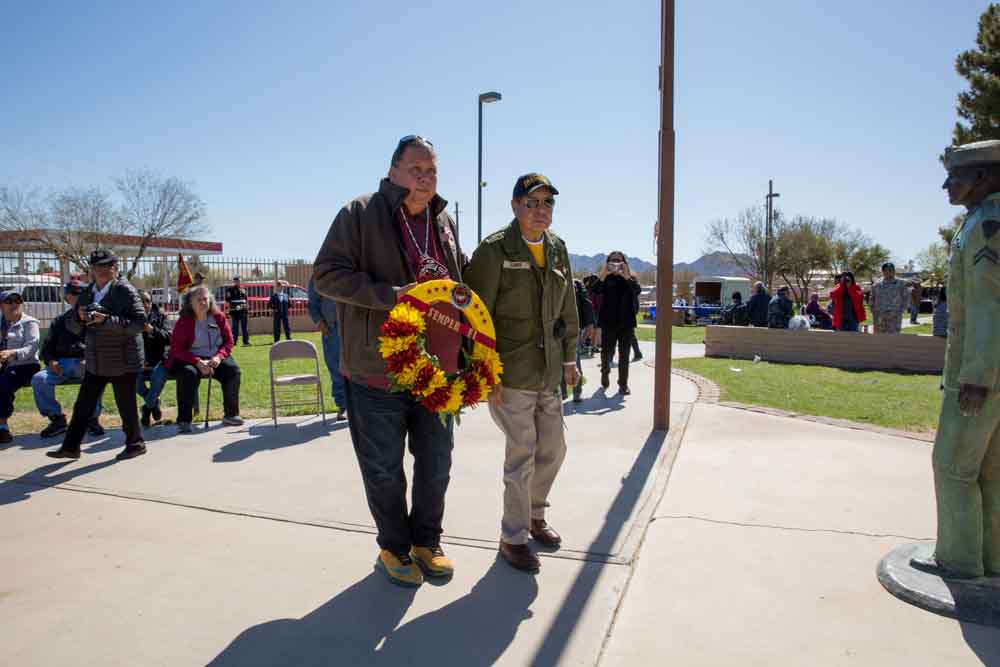 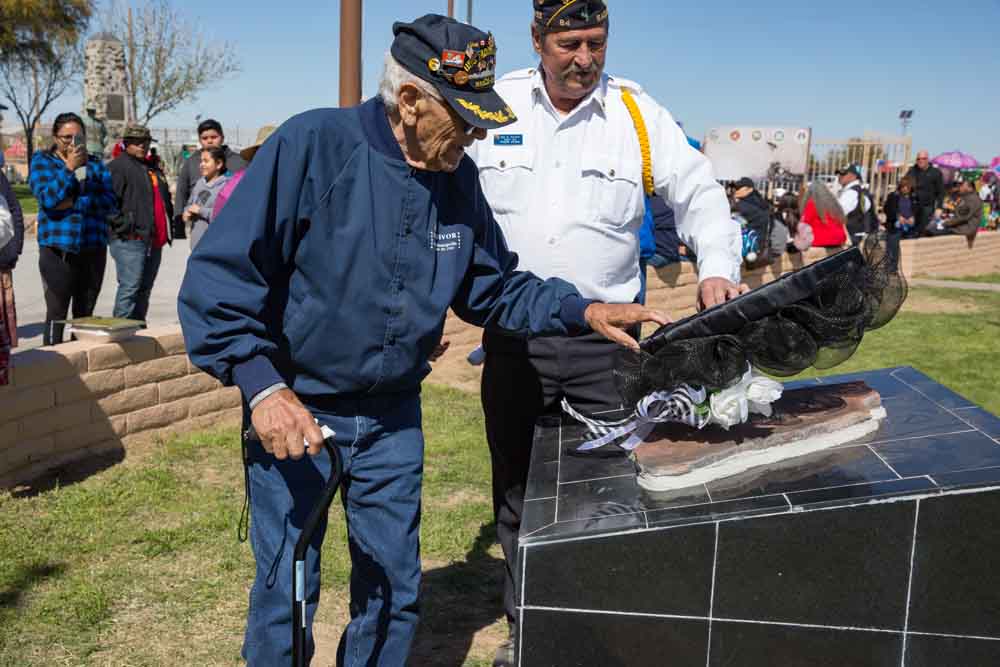 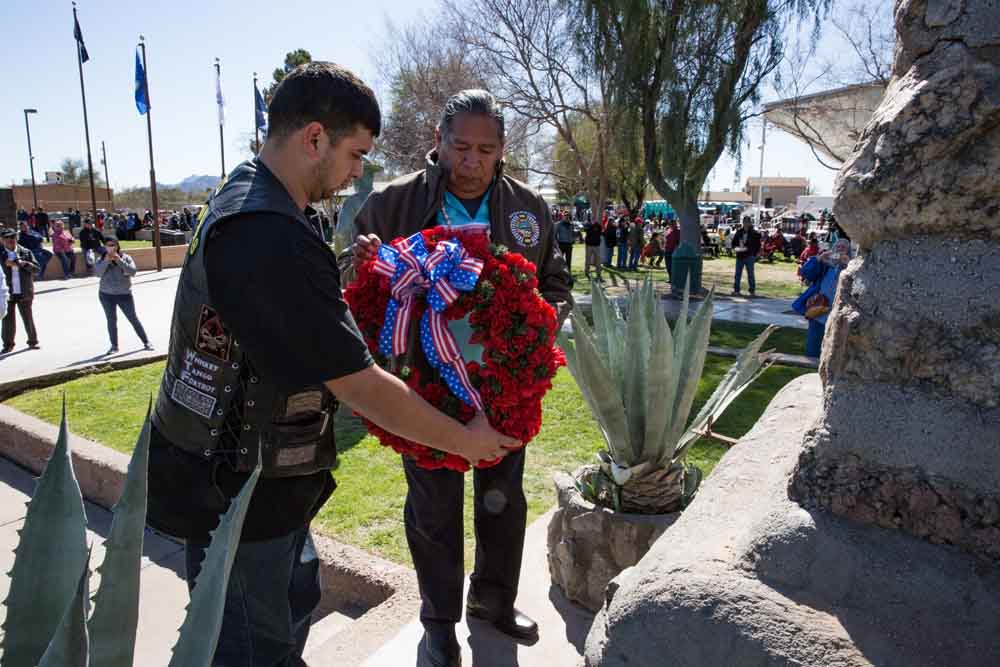 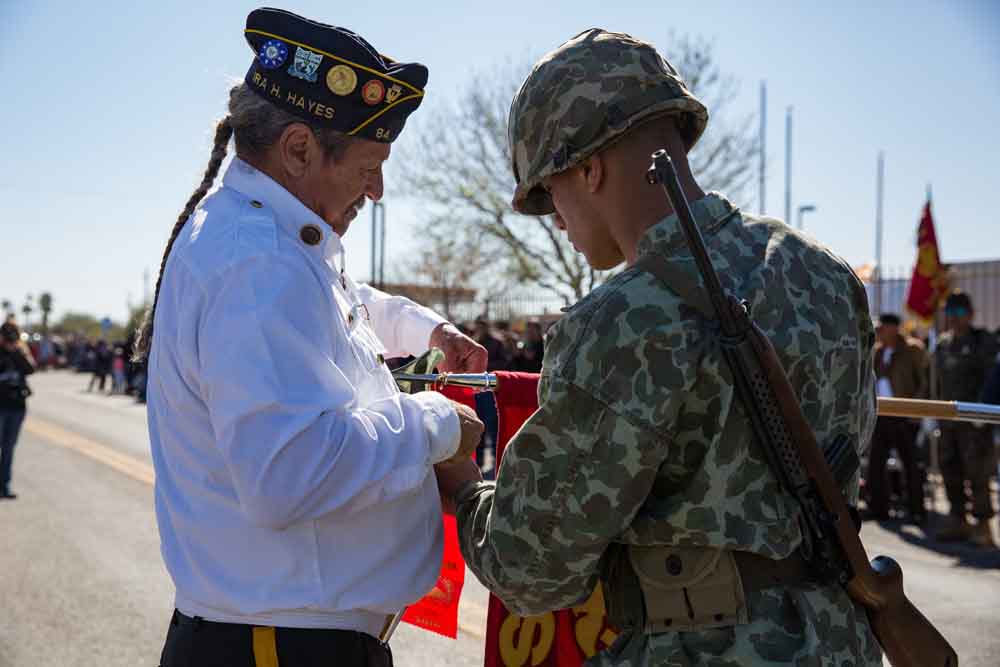