The Gila River Police Department held an award ceremony on Oct. 18 in Sacaton recognizing employees and officers for their hard work and dedication during the 2017 work year. In total, 20 employees were presented with awards.

“You come to work every day and do an outstanding job, you recognize what is going on and you’re here because it’s in your heart to come here and do the best that you can,” said Chief Elliot to the officers and employees. “I am really honored to be able to recognize all of you today that have done an outstanding job.”

A certificate of appreciation was given to Barbara Weaver for her work as a civilian investigator, a newly created position, handling 240 calls of service and 44 follow-up calls during her first year.

For the Community Service Award, Squad C was recognized for service done during the 2017 holiday season, helping cleanup the District 6 park. The beautification project was also a way for them to get to know community members. They also chipped in their own money to purchase gift bags that were given to Community members.

On July 4, 2017, the police received a 911 call from a distraught female who feared for the life of a male who was in distress and took off in the desert on a 110-degree day. Through joint efforts, the man was found and given medical attention. Officers Austin Himes, Manuel Ruiz III, Brandon Merkley, Sandy Brown and Sergeant Jeff Faulkner were given the Chief’s Citation Award for their quick response and understanding the severity of the call.

The Meritorious Conduct Award was given to Gordon “Shoni” June for his understanding and upgrading of the MIS system so that the police department can adequately serve the Community and is always ready to take on any IT issues that arise.

Officer Jeremy “the Man” Williams exemplified the Going Above and Beyond Award when heading home from an 18-hour shift, he observed a vehicle blocking the roadway and saw two subjects leave the scene. He recognized the pair as part of a vehicle theft operation. He confirmed the vehicle was stolen and called for backup, leading to the arrest of the suspects.

Receiving the Heroism Award was Detective William Morago, who was off-duty and driving with his family when he came across a vehicle crash involving a semi-truck and a car on fire with the driver still inside. After parking his family a safe distance away, Det. Morago attempted to save the occupant of the vehicle despite knowing the risks that were involved in the rescue. While not able to save the occupant, he was able to take a picture of the license plate which was used to identify the driver before the car was fully engulfed in flames. He also maintained the safety of those in the area until responding officers arrived.

The 2017 Communications Employee of the Year was Heather Gray who in her ten-year career has taken over 40,000 calls of service. She has served as a supervisor and has expanded her skillset to help the police department be successful.

The 2017 Employee of the Year was Randall Lara who was hired as an inventory specialist but soon became a jack-of-all-trades for GRPD, learning many different areas. Chief Elliot said that he demonstrates “mature, capable and knowledgeable opinions beyond his years” and that helps him receive praise from throughout the police department.

Officer Amanda Swinehart was named the 2017 Officer of the Year, also described as a jack-of-all-trades. She has researched and applied for many different grants while overseeing the evidence project to help address major issues. She sacrifices time with family and friends while remaining flexible to make sure assignments and projects are completed on time.

Following the presentation of awards, there were light refreshments for the officers, employees and their family that was in attendance. 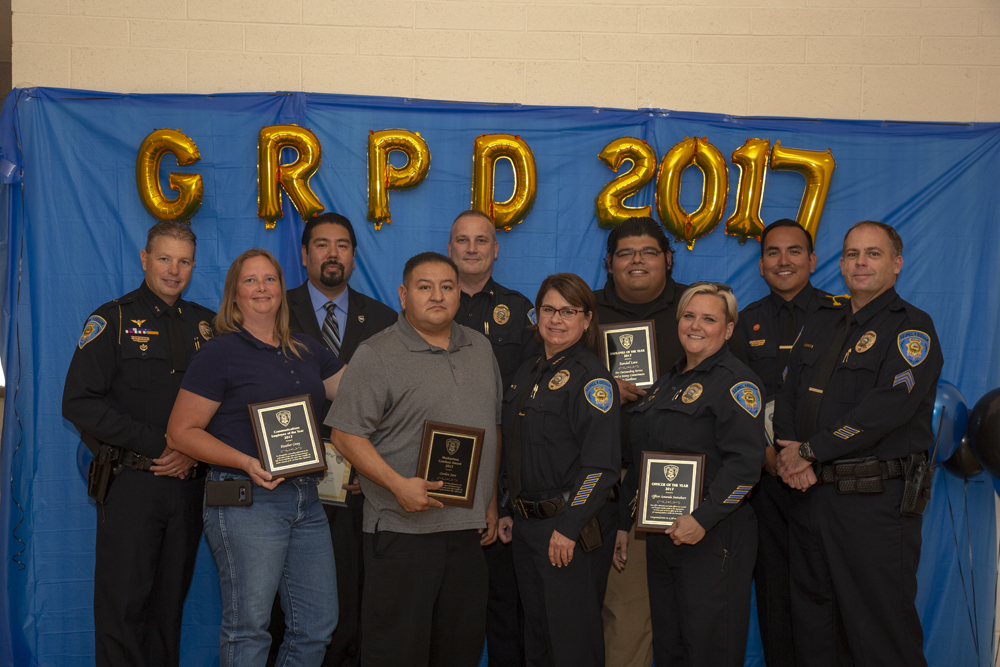