The lecture called “Kinship Responsibilities: Protecting a Way of Life,” was given by husband and wife Royce Manuel, Salt River Pima-Maricopa Indian Community, and Debbie Manuel, Navajo Nation, in downtown Phoenix on Sept. 21. They shared their perspectives on the passing their culture from one generation to the next.

They said it ultimately comes down to sharing the knowledge about those who came before us.

“There are many teachers, educators and historians, such as grandparents from Native communities, that have their own experiences,” said Debbie.

Royce said for his community and the southern O’otham tribes, there is a threat of losing the language and traditions and that it is upon those individuals who have knowledge about how things were done in the past to serve as advocates for the preservation of the culture.

“We are so ingrained within [this] society around us, that the things we had a long time ago were lost and so what I try to do,” is look at what our tribes did in the past.

He said gender plays an equally important role in how it is shared, because either the men or women performed certain duties vital to their position within O’otham society.

“A lot of people today don’t’ recognize some of the things that we have and how men and women functioned within the society,” said Royce.

One of these things is weaving, which according to Royce was an action performed by the men, when they made objects like the burden basket, sandals and other everyday items. The couple discussed the importance of learning traditional gender roles. Royce said, “Take for instance a little-known item like the flute, which you don’t see much anymore, it’s a man’s instrument and it was used to play at the house where a girl that he liked lived.”

He spoke about the use of the term “Pima” and how that translates into “I don’t know,” which is one word he tries to get people away from using, because it is part of the misinformation of how to correctly identify the Akimel O’otham.

Royce advised the students that language can be an interesting subject, because there are various origins to how the spelling and pronunciation came about. He said, “as an individual and a member of your own tribe you have to look beyond what you see and see where the history is and how that came to be, so you don’t get confused.”

Debbie said coming in as a non-O’otham speaker there are things that you learn that either represent the singular or plural, but also in the way it is emphasized with extended vowels, for example when explaining how far something is in the distance.

Kinship responsibilities are also expressed in traditional games such as is toka and gins. Toka is played by females and gins by males. According to Royce, toka simulates the battles of male warriors, which was recreated through a game played by O’otham women. Gins is played by the men on a large board of sorts, made out of holes dug into the earth and participants positioned in the cardinal directions. Players toss sticks into the air and move tokens around the board like Hasbro’s “Sorry” according to markings on the sticks.

The insightful presentation explained the importance of gender roles within O’otham society and how both the males and females work together to sustain the livelihood of the people and culture. 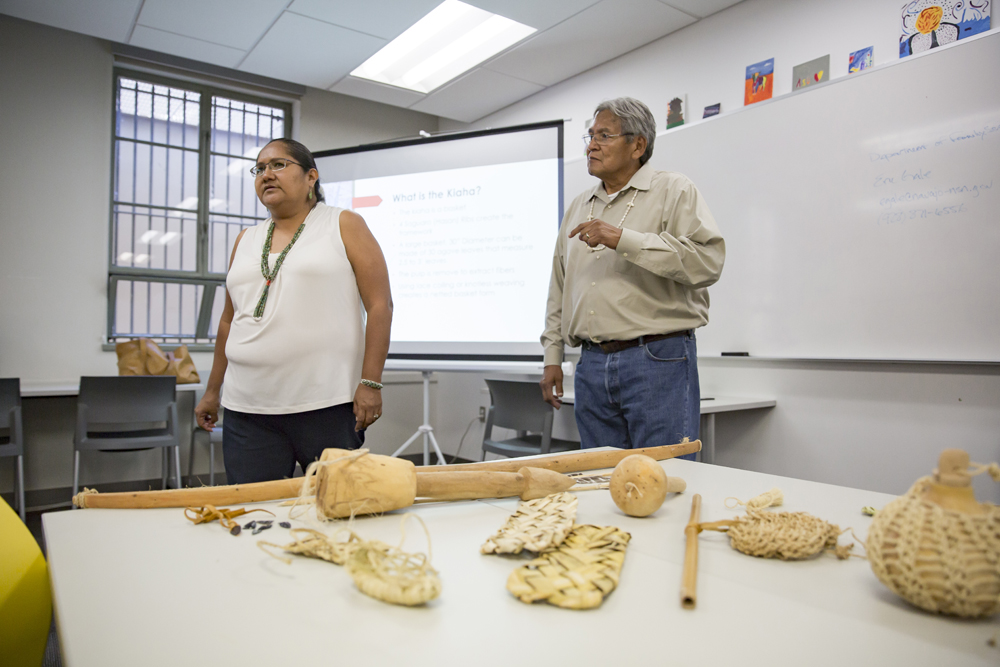