An important component of managing a large scale emergency, is the use of communication to relay information in short order. The Phoenix Interagency Fire Center, located at Phoenix-Mesa Gateway Airport in the East Valley, is the nerve center for all activity concerning wildland fires.

Alan Sinclair, Fire Management Officer for the Bureau of Indian Affairs Pima Agency/Salt River Agency, said a lot of information is passed through this center, which is also used as a base for air tankers used to fight wildfires.

Sinclair, who serves as the Incident Commander for the Southwest Interagency Management Team 1, has been active in the management of personnel from the Community and other BIA fire agencies this fire season.

The center serves as a staging area for wildland fire crews to deploy from, when they are called out to fires in other states.

Sinclair said the fire center contains a mobilization center, which can house up to five crews, until it is time to ship out. “What [this] is used for, when we send crews out to other states, if they’re not driving, but flying, they will load up a jet [here],” said Sinclair.

He said in previous fire seasons, the Pima Agency crews, have flown to Alaska to assist with firefighting operations there. The mobilization center also serves as extra space to provide trainings, briefings and a cache of supplies crews will use out on a fire, such as food, water and equipment.

For air support operations, the facility can have up to three to six air tankers at one-time depending on the size of the fire. Chris Price, Air Tanker Base Manager said, the ramp can fill-up, with aircraft of various sizes staging from the base.

He said aircraft like the DC-10 air tanker, can be filled with 9,400 gallons of fire retardant in 13 minutes, to get the aircraft back to firefighting activities.

Price said larger aircraft, such as a Boeing 747 passenger plane, reconfigured into an air tanker can be staged from the base, if needed.

Price said, firefighting air operations are a little niche within the fire community, is always looking for individuals, who are interested in air tanker ops. “Just grinding it out, I had the support of my peers,” said Price, “There is just not enough people involved, so there’s a lot of aviation opportunities to fill.”

Price said sorties where air tankers staged from the base, can easily rise to over 100 air drops completed on fires during record breaking years, such as in 2017, 2018 and this year alone.

In the center’s dispatch center, the activity was light compared to the previous weeks of operations on the Verde Fire, that threatened the Fort McDowell Yavapai Apache Nation tribal lands. “We have to communicate here on the floor and then when our expanded dispatch center is open, they are processing information and other things,” said Ashley Truett Dispatch Center Manager.

She said the challenge is making sure everyone who relies on the dispatch center, receives the resources and help needed, while out on a wildfire. 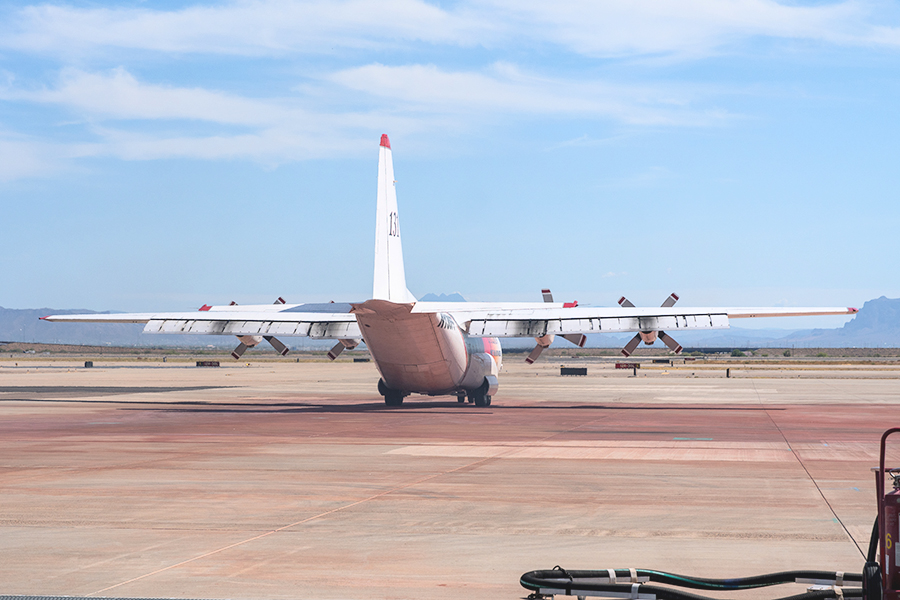 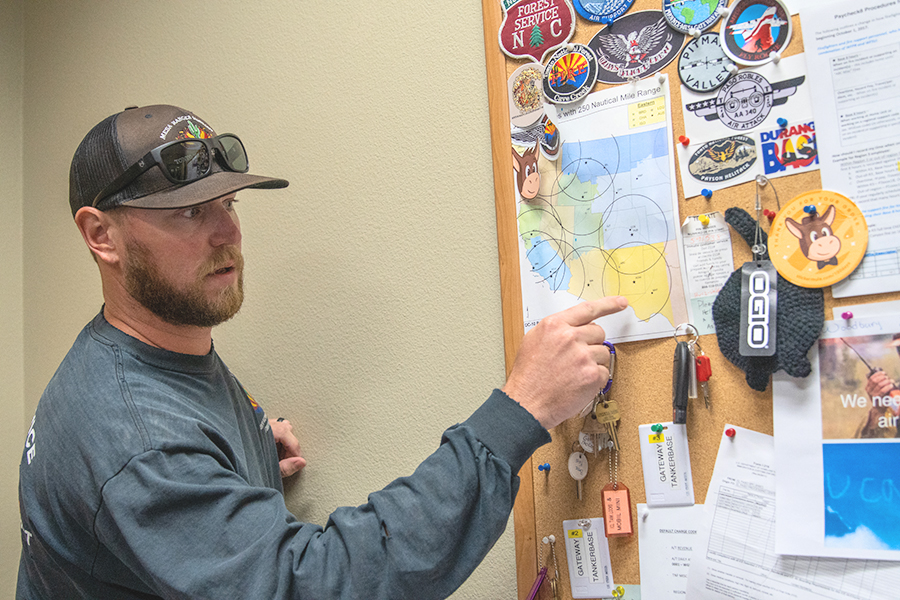 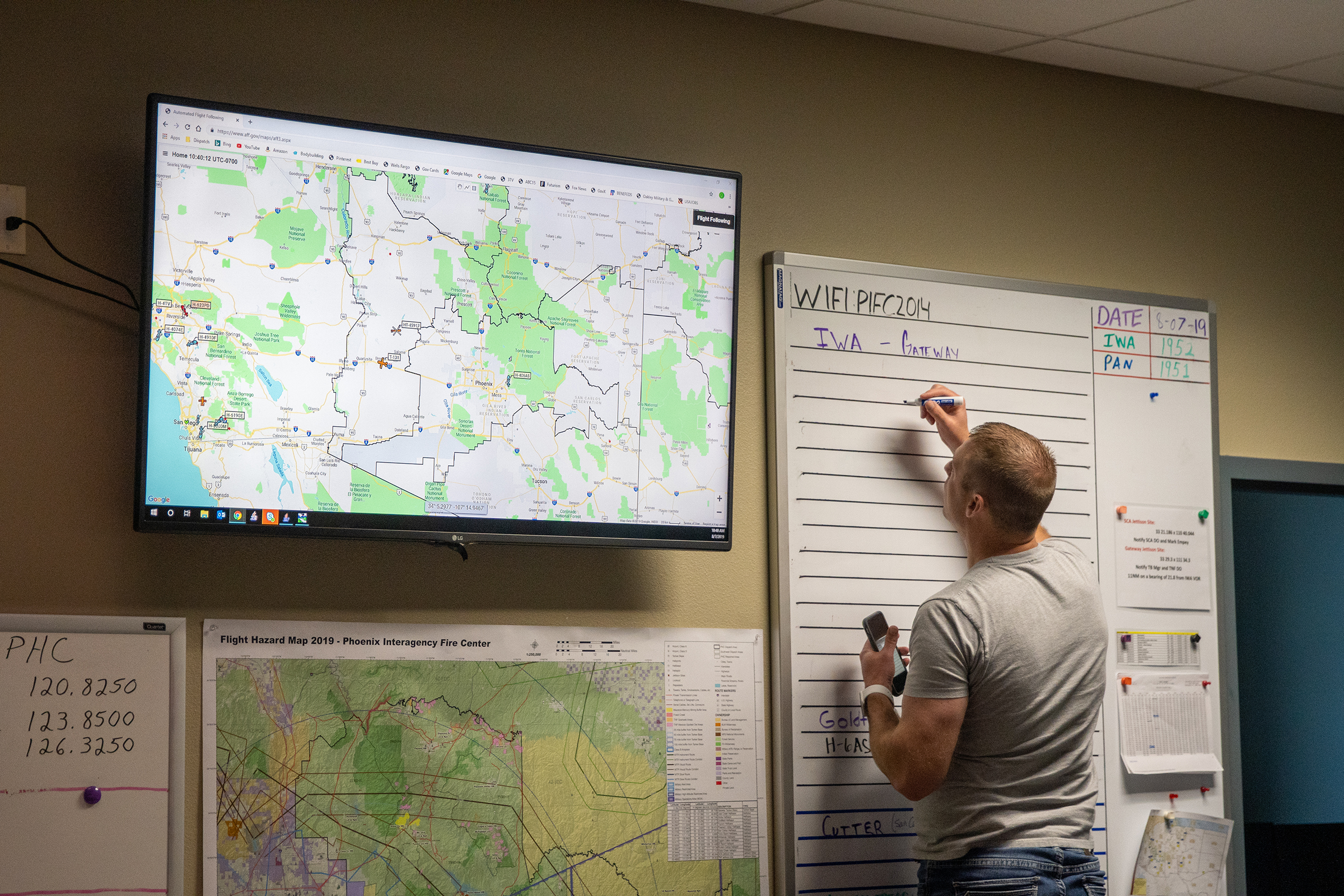 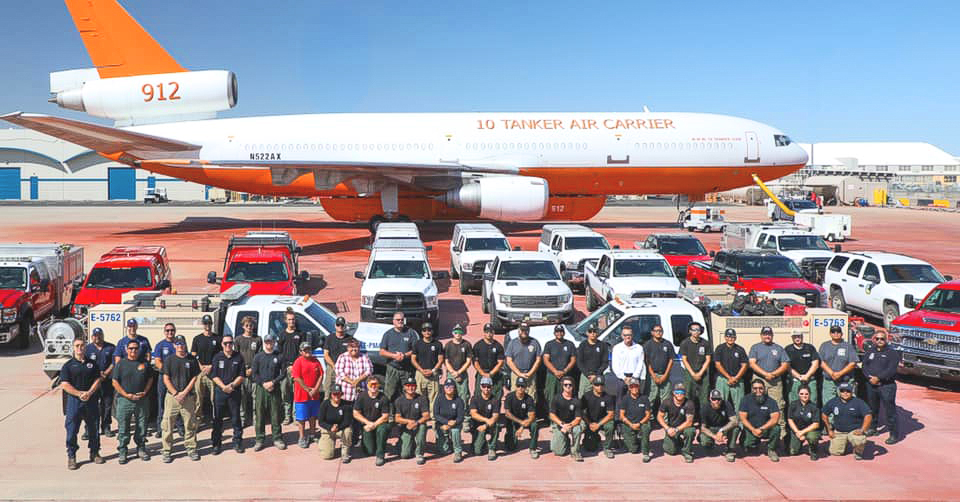