District 7 Community member Christopher Mercado, age 17, made a record-breaking catch while fishing, when he reeled in a 50 lb., 37-inch flathead catfish from Tempe Town Lake on Wednesday, Oct 28. Mercado is an avid fisherman and his catch is the talk of the town. In November, he was even featured on the Arizona Game and Fish website with his record-breaking fish in hand.

Christopher Mercado recounted catching the fish stating, “It was a big moment, I was shaking trying to hold it up and bleeding from its teeth, but we were excited and yelling.” At the time, Mercado knew it was a noteworthy catch but didn’t immediately realize it was the record for Tempe Town Lake.

On the morning of the catch, Christopher set out on a two-hour bus ride from District 7 to his friend’s home in Tempe. After casting their lines, the first few hours were uneventful until his bass lure began shaking from a catch. Christopher and his friend had to take turns reeling in the fish, and after a 25-minute fight, Christopher landed his catch.

Immediately after Christopher and his friend snapped a few pictures, then released it back into the lake. Before Christopher’s catch, the previous Tempe Town Lake record holding flathead catfish was only 15 inches long.

Christopher’s parents are James and Jodi Mercado. Jodi Mercado was very proud of Christopher’s accomplishment and was the one to notify Arizona Game and Fish three days after the catch. It was at that point Christopher was informed that he now holds the record for the biggest fish caught at Tempe Town Lake. Mrs. Mercado stated, ‘It’s very inspiring for me because I know there’s a lot of negative things he could be doing, so I’m proud that he’s out there doing positive things.”

Mrs. Mercado is confident in Christopher’s talents and hopes that he maintains his interest and achieves his goal to become a professional fisherman.

Christopher’s interest in fishing started at Cesar Chavez Lake in Laveen, and after his first few catches became “addicted” to the sport.  Today, Christopher takes online classes, and after completing his daily school work from home, he walks to a local area in District 7 for fishing to maintain and brush up on his skills. He acknowledges his family and peers that support him by sharing tips and fishing gear with him to continue his goals to go pro.

Moving forward, Christopher has his goals set on becoming a member of a professional fishing association at some point. He also wants to work towards purchasing a boat to help further his skills. You can follow his fishing journey on his Instagram fishing page by searching the Instagram handle, “Chrisbassin102702.” 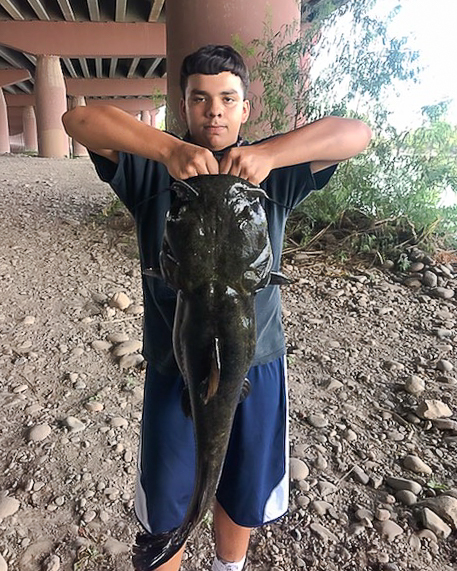