A portion of the Gila River is finally flowing again here at this site.- Gov. Stephen Roe Lewis

Special dignitaries, tribal leaders and Gila River Indian Community members attended the opening of an addition to the Managed Aquifer Recharge Site #5 in District 3. The MAR 5 Interpretive Trail opened on March 1 with Arizona Gov. Doug Ducey to mark the occasion.

“The MAR 5 project is the culmination of several years of planning and hard work. It represents the very latest in a series of efforts this community has greatly contributed to the sustainable water management in Arizona,” said Gov. Ducey.

“We’re here this morning standing on blessed ground of our ancestors, the Hohokam, to celebrate and share another major accomplishment of our community,” said Lt. Gov. Stone in his welcoming address.

In his remarks, Gov. Lewis gave a summary of the MAR 5 project, and his thanks for all of the partners who supported the Community in the Arizona Drought Contingency Plan discussions.

Ducey, Lewis and O’Halleran recalled the work of the late Rodney B. Lewis, Gov. Lewis’ father, who was instrumental in the Arizona Water Settlements Act and the MAR 5.

“A portion of the Gila River is finally flowing again here at this site. No one would be happier or more proud than my father on this historic day,” said Gov. Lewis.

According to Gov. Lewis, the MAR 5 project began in earnest in 2014 when Community Council approved the first Five Year Water Plan, which included as a major objective a “Return of the River” project, which was intended to gradually reduce the Community’s Central Arizona Project water deliveries and to make water deliveries to GRIC members more affordable.

The acceleration of the project coincided with the DCP discussions in 2016 when it was evident that with the worsening drought conditions, the Community could help Arizona by leaving a portion of its annual CAP water supplies in Lake Mead to help with the falling lake levels.

The inclusion of three streams to the MAR 5 “tripled the size,” of the storage capacity, which allowed GRIC to be, “a significant contributor in the DCP process,” said Gov. Lewis.

A new groundwater well field was also put in with federal funds thanks to cooperation from the Bureau of Reclamation, which expanded the Community’s ability to pump water at the site.

This allowed GRIC to also store water in Lake Mead which was a key element to the DCP Implementation Plan.

The DCP was eventually finalized after the Arizona legislature dropped consideration of HB 2476. According to a GRIC press release from Feb. 22, “The purpose of HB 2476 is ostensibly to repeal a cardinal principal of Arizona water law, the so-called ‘use it or lose it’ rule codified in the state’s very first water code as a rule of forfeiture.

Under the forfeiture statute any water right holder who does not use his water rights for an uninterrupted period of five years, without a legitimate excuse specified in the statute, can be found to have forfeited that right.”

Fernandez and Shope’s attendance at the MAR 5 event was indicative of the support they gave the Community when the controversial water bill pushed by Arizona House Speaker Rusty Bowers was introduced.

“Their leadership is an inspiration to us all today because it allows us to continue our efforts to work in partnership with the state to make the Drought Contingency Plan a reality, and soon,” said Gov. Lewis.

Following remarks by O’Halleran and Fernandez, a cultural song was sung by O’otham Male Singers and the ceremonial opening of the MAR 5 commenced with water released into the streams. 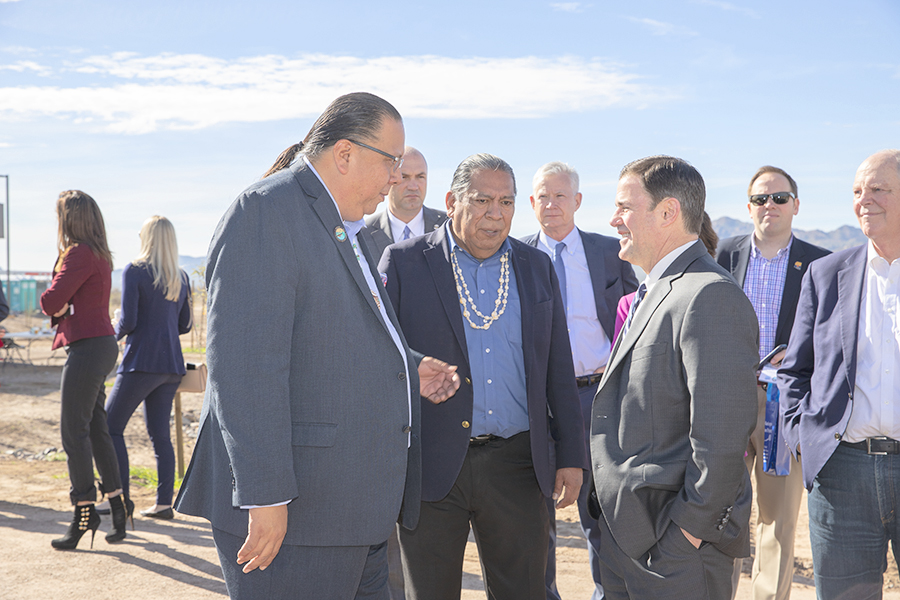 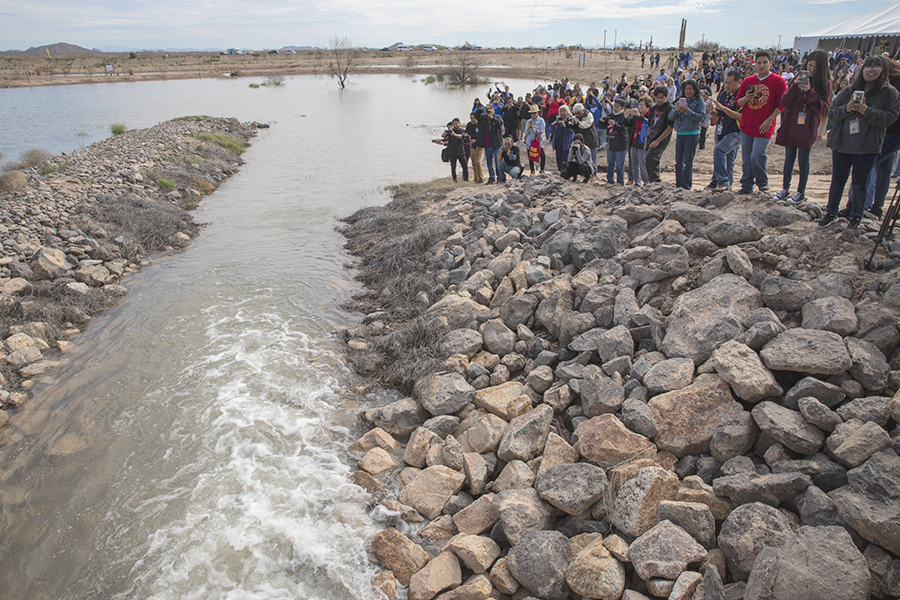