The Gila River Indian Community will be having a Special Election that coincides with the GRIC General Election and U.S. Presidential election onNov. 3. In this Special Election, Community Members will be voting to amend the Gila River Constitution, but in order for these changes to be valid, at least 30 percent of registered voters must participate in this election.

In 2006, Community Council adopted Resolution GR-53-06 establishing the Tribal Constitution Reform Project. In 2008, the project created a task force of Community members, one from each district, to educate and seek critical input from Community members about the Constitution and bylaws of the Gila River Indian Community, and possible reasons why the constitution should be reformed.

The initial constitution was enacted May 14, 1936. The Community has since made some previous amendments to the constitution, first in 1946 and again in 1960 which is now the current constitution. The Tribal Constitution Reform Project actively engaged with Community members in a series of presentations in each district.

With information from surveys that were given at those presentations, from 2008 to 2010, results showed that 93 percent of Community members who had participated in these surveys, agreed the constitution should be reformed.

In this Special Election, members will be voting on three different articles in the constitution. Article III – Membership In the constitution and bylaws of the Gila River Indian Community, Article III – Membership, Section 3, it states: “A member who establishes residence off the Reservation and remains away from the Reservation continuously for a period of twenty (20) years shall automatically forfeit membership.

If he returns to the Reservation, he may be reinstated as a member by majority vote of the Council.” The task force found that this section of the constitution had never been utilized and its origins are unknown. With the majority of the Community agreeing it should be removed.

The amendment to this article would delete the 20-year-rule, with a YES vote that will remove the language and allow member to maintain their membership if they remain away for 20 years. Voting NO would keep the current language. Article XI – Districts Currently, Article XI, Section 1 of the Constitution states that the area known as Co-op shall be within District 6.

However, the legal boundaries stated in Article 11 of the constitution place Cop-op within District 7. When the task force first reached out to the Community, the boundary issue was one of the first to be raised. During task force meetings, Community members made several appearances to explain the historical and political reasons why Co-op should be part of District Six.

In 2009, a proposed legal description and maps that would place the village of Co-op in District Six was submitted byCo-op residents and forwarded to Land Use Planning and Zoning who confirmed the accuracy and supported the proposed amendment.

A YES vote will change the legal boundaries of District 7 and District 6, while voting NO would keep the current language and the majority of Co-op will remain in District 7. District 7 Community Council Representative Devin Redbird stated that, “The District would like to remain unified and keep the current boundary as currently identified.”

Currently, Articles 3 and 15 of the constitution state that the Secretary of Interior has the authority to review certain kinds of ordinances and resolutions enacted by the Community Council, including civil and criminal codes and ordinances regulating tribal membership.

Voting YES would remove the Secretary of the Interior from the Ordinance and Resolution approval process. A NO vote will keep the current constitution. Currently, in the constitution of the Gila River Indian Community, it states that in order for the amendments to bepproved, at least thirty (30) percent of registered voters must vote in such election.

The Communications & Public Affairs Office has put together a Constitution outreach team to promote and educate GRIC members about the important Special Election. Due to the pandemic, outreach to the Community has required more creativity to prevent the spread of the coronavirus and maintain physical distancing.

A virtual constitutional convention will be held on Saturday, August 29 and broadcasted on Gila River Broadcasting Corp., to inform Community members about the special elections and to answer any questions. 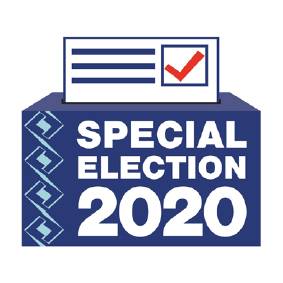