Renowned Native artist Bunky Echo-Hawk and Votan Henriquez created a mural of the late Chief Antonio Azul in Sacaton at the GRIC Youth Council Office starting on Oct. 29. The mural was completed in four days and features the surrounding mountains engulfed in a warm sunset sky, a historical image of Chief Azul, and text that reads “Himdag.”

Bunky Echo-Hawk, Yakama and Pawnee, chose Chief Azul as a way to acknowledge his leadership.

“The choices he [Azul] had to make at such a pivotal time, to look forward, and make decisions that would benefit and protect the people into future generations…” said Echo-Hawk.

The mural features a landscape that reflects the traditional O’otham and Pee-Posh lands juxtaposed with an image of Chief Azul outlined in blue, which runs across the horizon of the mural and represents the Community’s ties to water.

“It symbolizes where we’ve come from and where we’re going,” said Lewis who was impressed by the final design.

Echo-Hawk explained that the mural represents the Community and recognizes the past, current, and future leadership that will carry the Community forward while continuing to honor O’otham Himdag.

The mural was a mixed medium mural using spray paint and a wheat paste method for Chief Azul’s image. Votan Henriquez, Mayan, and Nahuatl mastered the craft of wheat pasting and was integral in the process. Votan said, “We chose to make the print halftone, so it resembles comic book print giving Chief Azul a superhero look.”

Throughout the four-day process, various Community youth contributed to the completion, including Michael White, District 5, and AOPPYC President Susanna Osife. 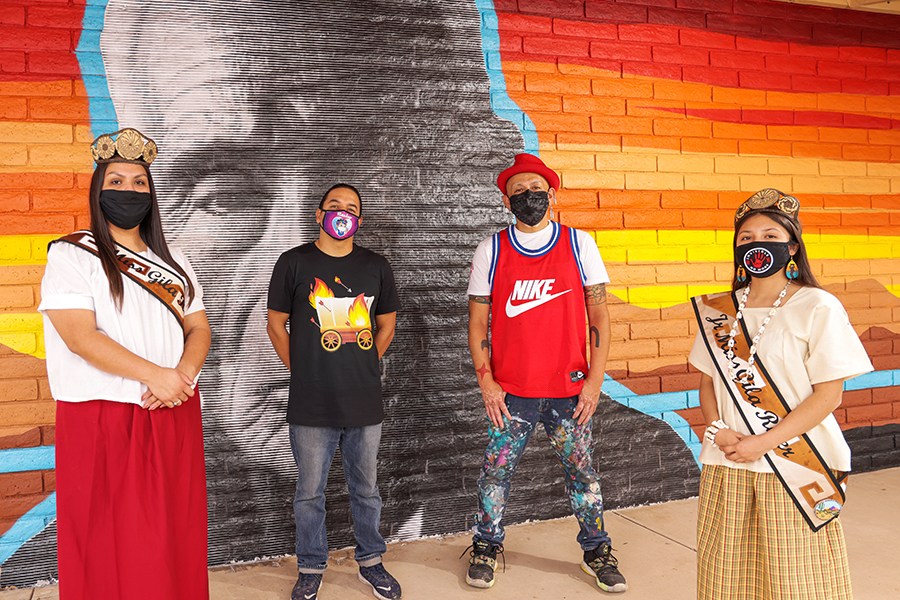