GRIN Articles > In the Golden Age of Hollywood, a Local Pee-Posh Woman Makes Her Mark on the Silverscreen

In the Golden Age of Hollywood, a Local Pee-Posh Woman Makes Her Mark on the Silverscreen

More than 65 years ago, a local Pee Posh woman made a successful career in Hollywood.

Beulah made her most notable appearance in the 1956 Western “The Searchers.” She not only worked with renown director John Ford, but she also acted alongside cowboy star John Wayne.

Beulah portrayed “Wild Goose Flying in the Night Sky,” or “Look” in the movie. One of the characters unwittingly purchases Look as his bride, and she initially appears to supply comic relief. But quite shockingly “Look” becomes a victim of the soldiers’ ruthless massacre of an Indian village.

The Searchers was shot during the summer of 1955 in Monument Valley and became one of the greatest Westerns ever made.

But for decades, no one acknowledged that Beulah was Pee-Posh from the Gila River Indian Community or that her career included background and minor roles in 34 movies and TV shows. In fact, she worked with some of Hollywood’s biggest names.

Her first acting opportunity was for a small part in “Unconquered” (1947), directed and produced by the formidable Cecil B. DeMille. Beulah played a Seneca woman in the movie’s rousing story about Pontiac’s Rebellion. She also had a brief appearance in “Key Largo” (1948) starring Humphrey Bogart and featuring Jay Silverheels, later Tonto of TV’s “The Lone Ranger.”

Before Beulah’s Hollywood career took off, she had spent most of her life in Arizona. Her birth certificate shows that she was born in Phoenix on August 24, 1909, to Lillian Johns (1886-1981) and Lawrence “Loren” Milton Donahue (1886-1922). Beulah’s mother was Pee Posh, and her father was Klamath from the small town of Forks of Salmon in northern California. Lillian and Lawrence married in 1908, and the 1920 U.S. Census shows that the family lived on the Gila River Indian Community where Lawrence was a farmer.

Beulah was the eldest of eight kids, and along with her family she attended the Presbyterian Church. Sadly, she lost her father to typhoid fever in 1922.

But through education and hard work, Beulah was able to build a life for herself. BIA records at the National Archives show that she first attended Grant Public School in Phoenix and later enrolled at the Maricopa Day School, a one-story adobe schoolhouse located on the extreme western part of the reservation. The school had opened in 1901, and its capacity was only about 44 students.

But at the Phoenix Indian School, Beulah was among hundreds of students. She enrolled in 1921, and four years later the BIA boarding school had 939 students packed into its overcrowded and underfunded facilities. Along with her classmates, Beulah was subject to “de-Indianization” and forced to assimilate through a harsh military-style regiment and mandatory classes emphasizing Anglo values.

Despite these many challenges, Beulah excelled in all her classes. Her BIA school records show outstanding marks in a wide variety of subjects, from algebra and chemistry to music and writing. She was rarely absent during her eight years even though major epidemics of measles, influenza, whooping cough, and tuberculosis regularly swept the campus.

Beulah’s many activities reveal her strong skills in communication and leadership. The school’s publication, The Native American, shows that she was a student advisor for the Junior YWCA, president of the Home Economics Club, and vice president of the Willamette (Literary) Society. In the ninth grade, she impressed many when she recited “Mark Antony’s Oration” from Shakespeare’s Julius Caesar.

Beulah graduated from the Phoenix Indian School in 1929 and a year later moved to Los Angeles to work as a cook for an attorney and his family. She returned to the reservation and in 1934 married Santiago “Sandy” Archuletta from New Mexico’s San Juan Pueblo, now Ohkay Owingeh. Several years later she moved back to Los Angeles with her husband and their two children, James (1935–2003) and Arlene (1939–2010).

While Sandy was a mechanic for a trailer company, Beulah kept busy raising two kids and working as an actress. Besides her notable appearance in The Searchers, she played in two episodes of the popular TV series “Wagon Train” (1957-1965) starring Ward Bond and John McIntire. She was also a guest on TV’s Rawhide in 1960 with Eric Fleming and a very young Clint Eastwood. Her last role was as an Arapaho woman in the epic 1962 movie “How the West Was Won” with an all-star cast featuring James Stewart, John Wayne, and Gregory Peck.

Beulah wasn’t the only Hollywood actress from Gila River. Edith Mills (1894-1962) was born Edith Morago in Arizona and was Akimel O’otham. She appeared in eight movies and TV shows including a guest in the series The Adventures of Jim Bowie (1958) with Scott Forbes. Her nephew was Jay Roe Morago, Jr. (1917-2008), the first Governor of the Gila River Indian Community.

Beulah remained in Los Angeles until she died in 1969 and was buried in Resurrection Catholic Cemetery, just east of downtown Los Angeles. But she left a legacy as one of the few Native American women who more than half a century ago had carved her own niche in Hollywood. 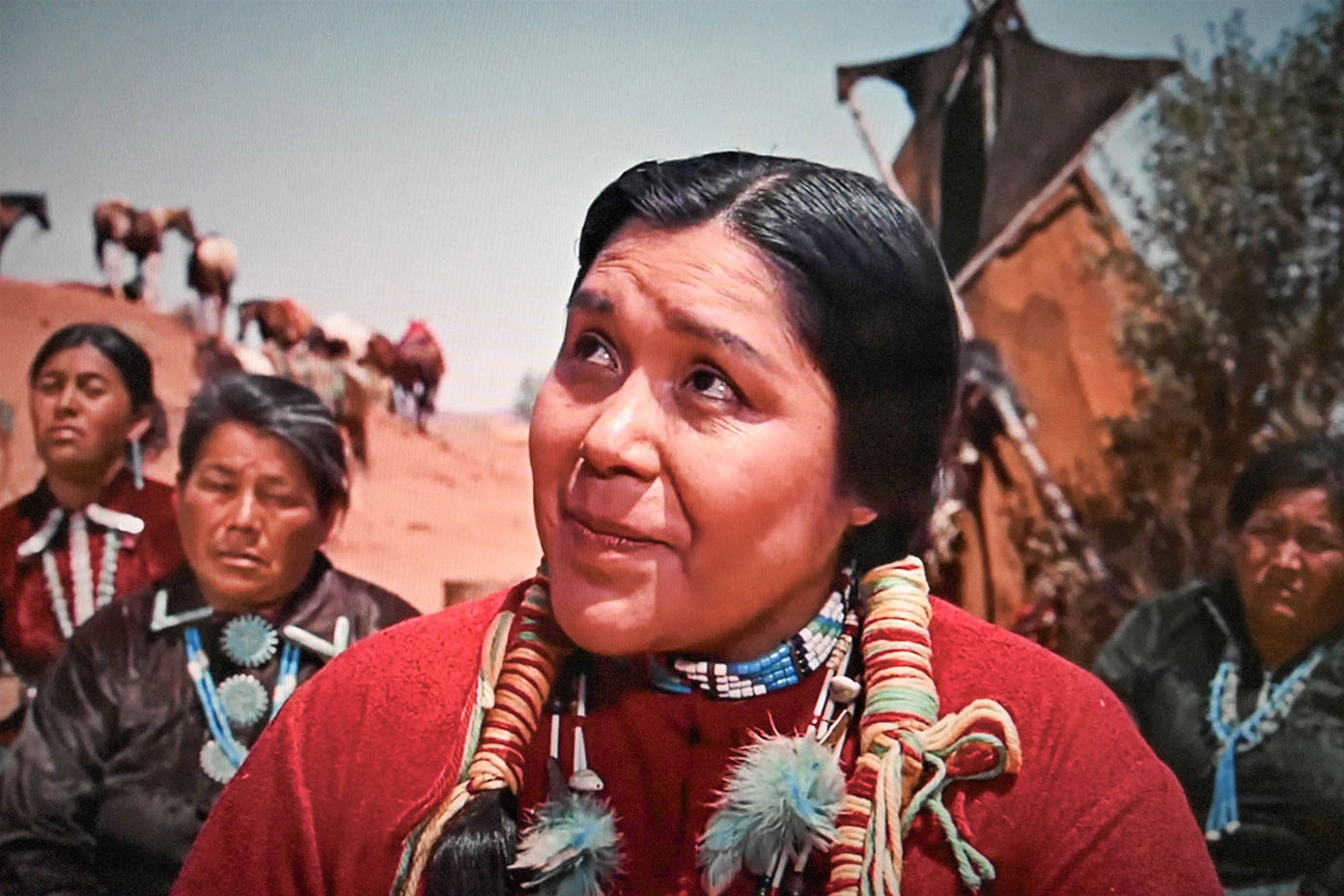 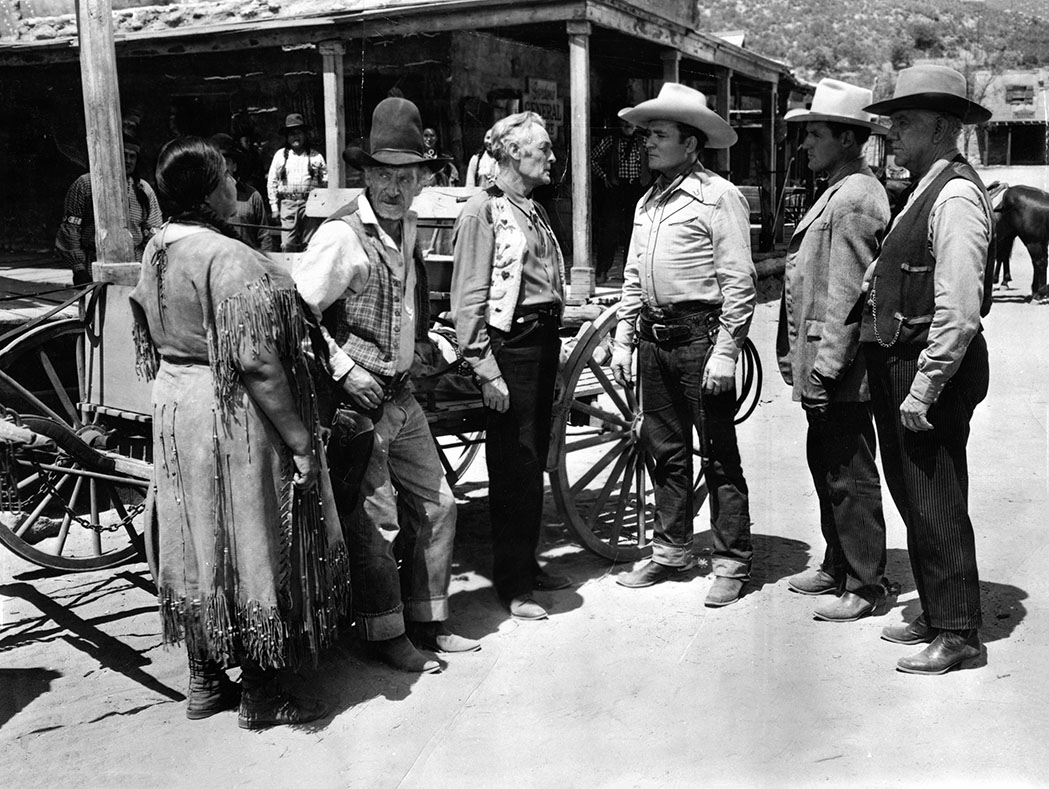