“It’s hard to put into words what this award means to me,” said Carmen, who graduated from Trevor G. Browne High School in 1990,  where he excelled running cross country and competing in track and field.

Carmen went on to graduate from Abilene Christian University in Texas, where he earned a B.A. in Elementary Education. He later earned a Master’s degree in Administration from Arizona State University.

Carmen, who currently teaches at two elementary schools and coaches varsity girls basketball at Maricopa High School, said his experience in competitive high school and college sports was seldom talked about until he received news he would be inducted into the Phoenix Union Hall of Fame.

“I never really talked about it, even with my own children who were surprised, so it was something that I was good to share more about with them,” said Carmen.

As a young runner, Carmen’s path to success wasn’t easy. He grew up on the western edge of the Community without two parents, raised by a grandmother Patricia Carmen (maternal grandmother). He recalled the Komatke area as “my training grounds for what was to come and what I went through.”

Carmen expressed thanks for the people who helped him along the way, and who taught him about the culture and the role of running in many of the Community’s traditions.

“I was well-versed in the tradition of Akimel O’otham runners, serving as messengers and the history of our people,” said Carmen, who also talked about running not only as exercise but also as a means of improving one’s place in the world. “Even back when I was going through a lot of hardships, I had to think about my own mental state, my own strengths that I used to persevere through at the time,.”

Carmen said he encourages the younger generation of Native athletes to make strides in their sport, make sound choices and to think about how they too can be a role model for their community. He also spoke of running as a means of preventing sickness.

“Illnesses like diabetes are things we want to prevent in life, because there is no cure for it, so we have to take care of ourselves,” he said. “The best way is to keep moving. Running is a big part of people, it connects us with the land and environment.”

Carmen called it an honor to be inducted into a Hall of Fame that includes athletes who had pro careers in the NFL, NBA and MLB. At the same time, he emphasized the importance of education and giving back to your community with all you do.

“I try to be humble and kind every day,” said the new Hall of Famer. “I have been motivating young people for 20 years as a teacher and basketball coach, finding ways to keep (them) looking ahead. It was hard to live and get by back then, so I know what some of these kids are going through.” 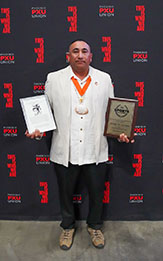