Gila River Indian Community Gov. Stephen Roe Lewis and tribal leaders from across the state met for a roundtable discussion with Secretary of Transportation Pete Buttigieg on July 15. The event, organized by the Inter-Tribal Council of Arizona in coordination with the U.S. Department of Transportation, was held at the Sheraton Grand at Wild Horse Pass.

The meeting was Buttigieg’s final stop in his visit to Arizona, which focused on the infrastructure needs of the state’s tribal communities. “We want to know the ‘who, what where, when and how,’and also share our concerns around transportation on your reservations,” said Arlando Teller, Assistant Secretary of Tribal Affairs with the U.S. Department of Transportation. “We want to encourage your communities to voice your concerns, which is sincerely appreciated by [us] and Secretary Buttigieg.”

Secretary Buttigieg said he looked forward to working together with tribal communities during the session and in the future. “I want to thank the Gila River Indian Community for having me. I am very fortunate to have a conversation like this,” said Buttigieg.

Buttigieg’s visit is part of the Biden Administration’s commitment to visit states across the nation and meet with tribal nations, offering them an opportunity to voice concerns regarding infrastructure in Indian Country. Roads across tribal communities are in disrepair and need major improvements, a situation that has long plagued tribes across the U.S.

Gov. Lewis impressed upon Buttigieg the need to expand federal funding for use to build transportation and road improvement projects. “I know [you] have been a champion for inclusion of tribal nations in infrastructure packages that will be considered before Congress,” said Gov. Lewis. “My request to you and President Biden is simple. Allow tribes to utilize the American Rescue Plan Act funding to invest in the range of infrastructure needs due to the pandemic and to prevent future emergency events.”

Gov. Lewis urged Buttigieg to request that President Biden issue a memorandum allowing tribal nations immediate access to ARPA funding for use to improve roads and other transportation projects. “I know that you and the President have a chance to revise the funding to address this unprecedented crisis, Mr. Secretary,” said Gov. Lewis.

Secretary Buttigieg called his tour an eye-opener. “Several things of what we saw today are unique: the rate of growth in communities, the close coordination and collaboration between tribal leadership, federal leadership and local leadership, along with the unique conditions in Indian Country,” said Buttigieg.

Buttigieg added that the rate of growth in a community such as GRIC and  cities like Maricopa offer special cases where major transportation throughways intersect and pass through the Community.

“What is special about today, is that I am literally able to be at the table with tribal leaders and literally come out and ‘kick the dust’ on the physical needs,” said Buttigieg.

Gov. Lewis stressed the importance of Interstate 10. He cited the Community’s partnership with the Federal Highway Administration, the Arizona Department of Transportation and the Maricopa Association of Governments on solving transportation issues. Lewis added that I-10 represents a critical element not only for the Community but for the state and for interstate economic activity.

“Twenty miles (of I-10) go right through the Community and you can see there are two lanes on both sides,” said Lewis. “This is one of the last stretches of the I-10 to be developed.”

He said I-10, like many of the major throughways on the Community, need improvements in order to make them safe for all travelors, both from and to the Community. 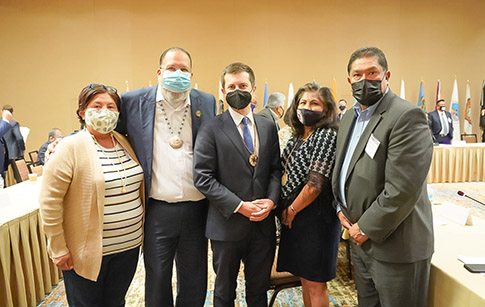 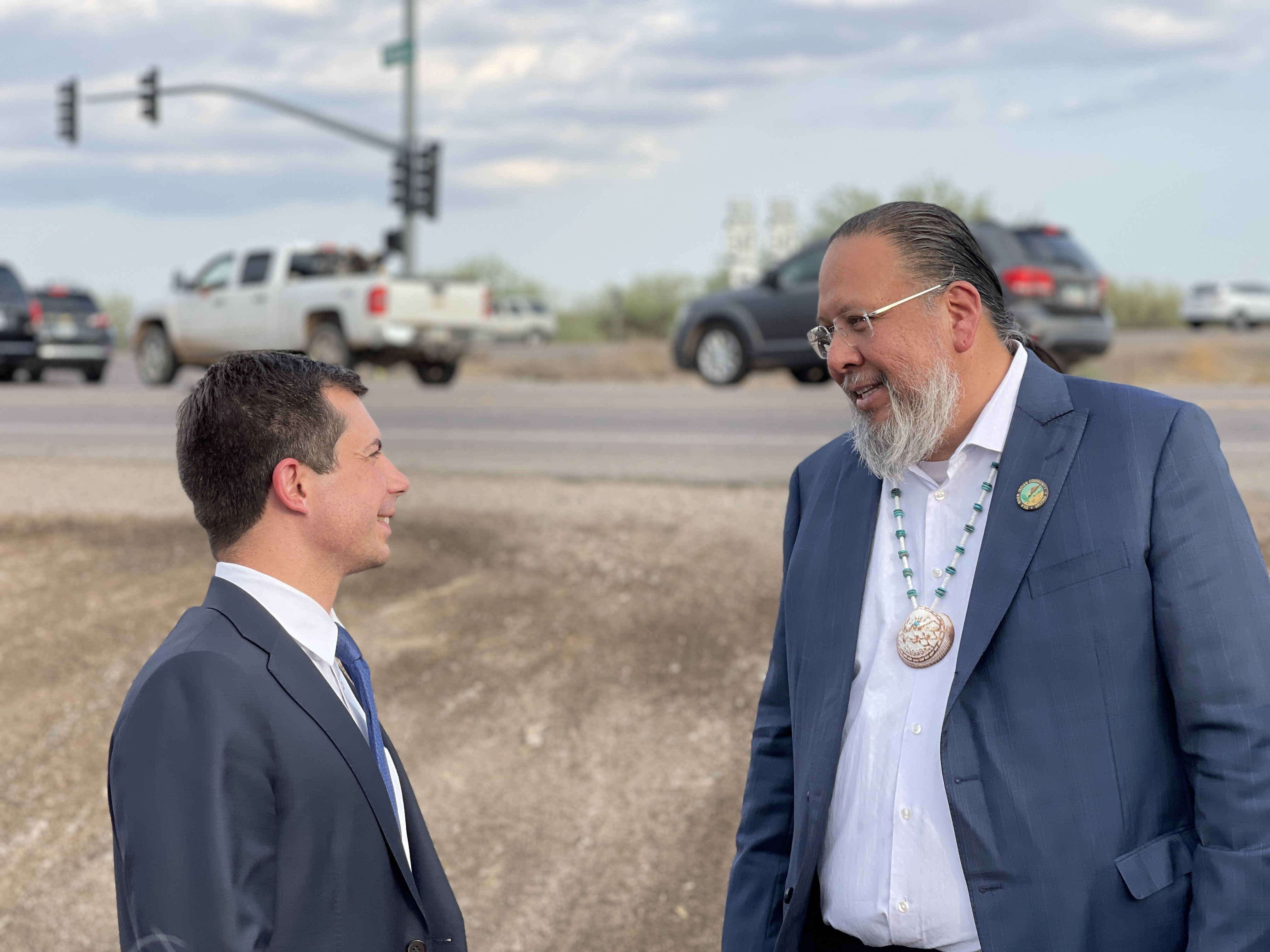 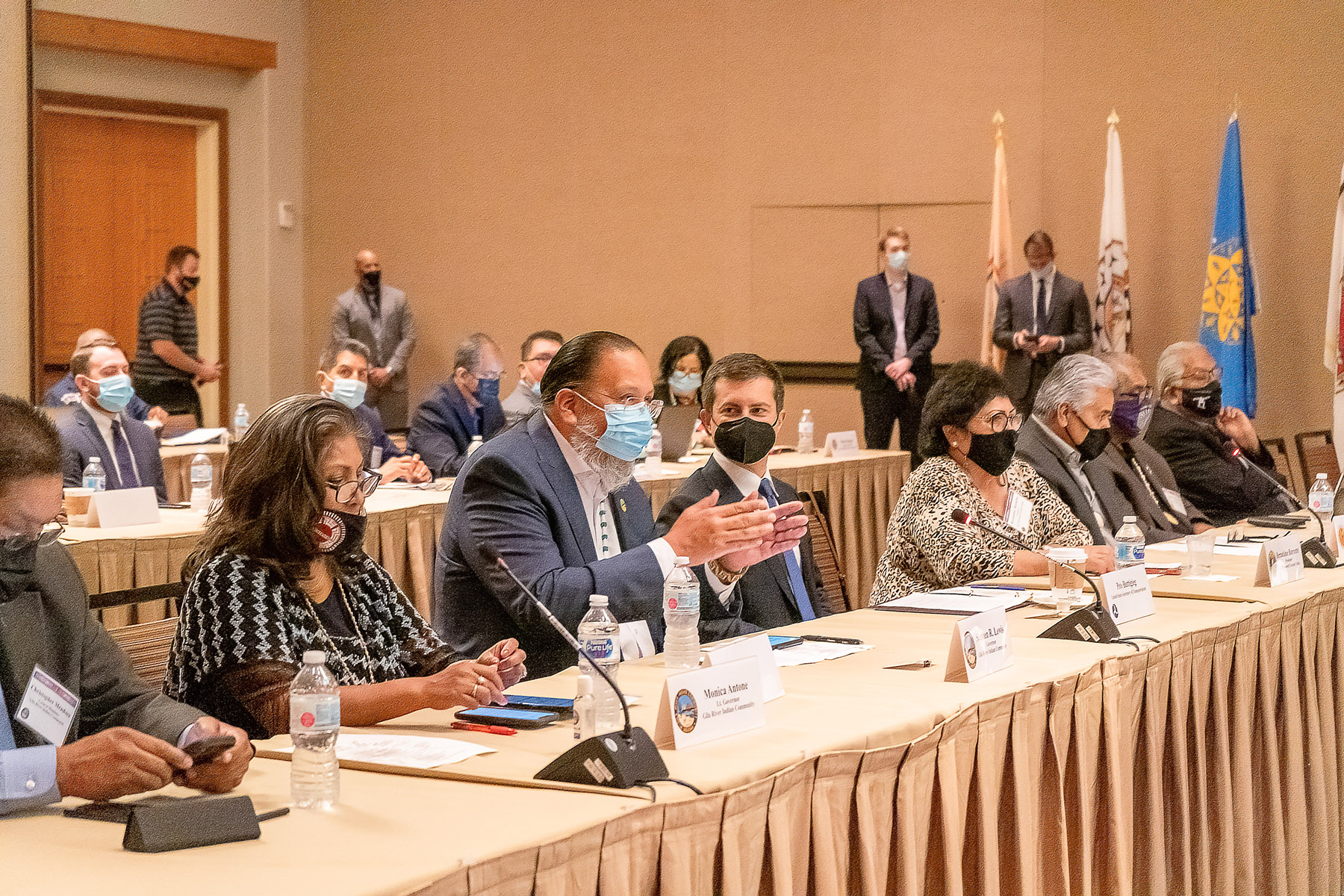