Arizona Congressman Greg Stanton visited the Gila River Indian Community on Wednesday, June 2, for a tour and a discussion with Gov. Stephen Roe Lewis at the Governance Center in Sacaton. Stanton’s stops included the Gila River bridge along the I-10, the site of the new Casa Blanca Community School in District 5 and a tour of one of the Mobile Vaccination Units which have been deployed in the Community for the past month.

Stanton, a Democrat who previously, served as Mayor of Phoenix from 2012 to 2018, said he will continue to advocate for the Gila River Indian Community as a member of the U.S. House of Representatives from Arizona’s 9th District.

Gov. Lewis said the tour was an informative way for Stanton to see the Community’s innovative approach to using federal dollars.“Rep. Greg Stanton was very impressed with how the Gila River Indian Community is approaching transportation, education and vaccinations – in particular our use of the Mobile Vaccination Units,” said Gov. Lewis.

Stanton’s tour initially focused on infrastructure with a stop at the Gila River bridge along freeway between Phoenix and Tucson. Representatives from the Arizona Department of Transportation and Wild Horse Pass Development Authority were also on hand to join on-site discussions with the congressman.

After a tour of construction of the new Casa Blanca Community School, members from the Office of Emergency Management took Stanton and Gov. Lewis to see a Mobile Vaccination Unit parked outside the Governance Center. The tour allowed the Congressman to see the vehicle – which is currently being used to take vaccines out into the districts – up close to get a sense of how the MVUs operate.

The visit concluded in the Executive Office where Gov. Lewis and Stanton discussed the Community’s water settlement, the recently signed amended gaming compacts and the progress of the vaccine program in GRIC.

“I trust Governor Lewis and I trust the Community leadership and plan to continue to be an advocate for as long as I can,” said Stanton. 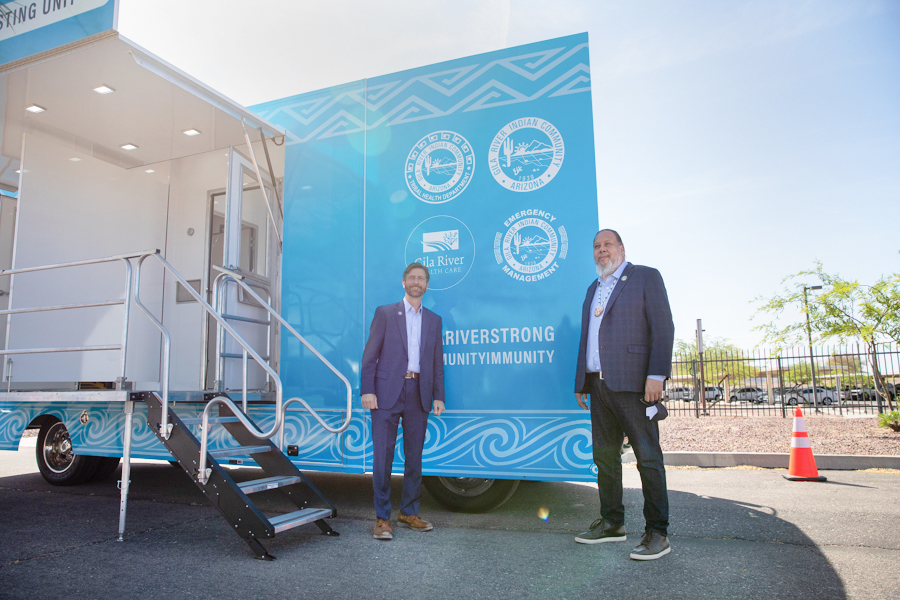