Four-years in the making, a hoop dream finally came to fruition for a high school student from District 3. Nicolas Harrison, who played for Coolidge High School, has officially announced his commitment to play basketball and attend Northern Pioneer College in Holbrook, Arizona.

Coming off of a successful senior year playing basketball, Harrison made the announcement with family at the CHS Bears gymnasium on May 8.

“There were a lot of schools to choose from. It was a hard decision, but I felt this one stood out to me the most,” said Harrison on his decision to play basketball at NPC.

Harrison thanked his family and parents for supporting his interest in playing basketball, which has been his principal passion since he was a young boy. He also expressed his gratitude to CHS staff and Tribal Education Student Services staff for their support in school and on the court.

“I am very proud of him. [He] has a very good talent with basketball,” said Corrinne Escalante, Harrison’s grandmother, who called him a “good kid” who has “come a long way,” and who has never been afraid to work hard to follow his dream.

“This is a huge day for Nick,” said Ben Armstrong, CHS Principal. “[You] have been his support system. I have seen you all at each and every one of his games,” said Armstrong, speaking to Harrison’s family and friends. The principal emphasized what a rare opportunity it is to play basketball at the college level.

“We are really thankful and blessed that he has chosen a school that is a best fit for him,” said Carolyn Escalante, Harrison’s mother. “There was a lot of family and community support, even among his teammates and Gov. Stephen Roe Lewis,” said Carolyn, who added that Nick’s long hours and weekends in gymnasiums, parks and the backyard, were all meant to foster and support his passion for basketball.

“He decided to stay in Arizona and chose the school that offered first, a good education and then basketball,” said Danny, Harrison’s father. Danny said his son grew a lot in his last year of high school basketball. “He made a comeback from  an injury that he suffered from during his Junior year. He grew a lot in how he was able to analyze the game a little more.”

Looking back at his last year in high school, Harrison explained that the pandemic created a lot of adversity. Even so, Harrison expressed pride in the mark he made on the Coolidge basketball team and said he hopes to do the same at NCP.

Between graduation and starting his first year of college, Harrison and the Native Hot Boyz plan to play in the 2021 Native American Basketball Invitational this summer. 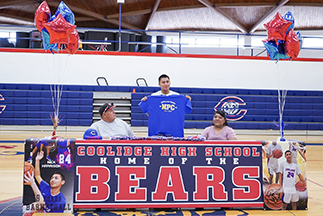