The celebration continued the legacy of honoring what is known as Arizona’s First National Guard. The event included awards presentations, traditional O’otham and Pee Posh songs, and performances by One Way Sky and Gertie and the T.O. Boyz.

“Today and for the past 50 years, The Gila River Indian Community continues to honor the Akimel O’otham and Pee Posh men who were mustered-in to help defend and protect the land,” said Gov. Stephen Roe Lewis in his opening remarks.

“Every year in September, the GRIC gathers to recognize the significant event known as Mustering-In Day,” said Lt. Gov. Antone. “The event takes place in District 7, where festivities commence in honor of the Akimel O’otham and Pee Posh, who were mustered in to help defend and protect the land.”

Lt. Gov. Antone shared that in the 1860s, military presence in the Arizona Territory was limited due to the American Civil War. Few soldiers were available to protect the land and people against raids and territorial disputes. This led to the U.S. authorizing five companies of volunteer soldiers in the fall of 1865.

Woven throughout the speakers and performances were numerous traditional O’otham and Pee Posh songs and dances, from “Bird Singing and Dancing By the River” (SRP-MIC), Kevin Stevens (District 7), and “Achem A’al Basket Dancers” (GRIC).

The event began and ended with the presentation and retiring of the colors by the Pee Posh Veterans Association. In addition to the performances, District 7 Community Members were treated to an evening fireworks display, viewable from home. 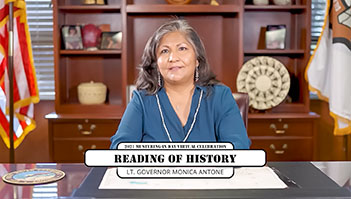