The Phoenix Rising FC was in fine form for it’s April 9 home game at Wild Horse Pass against the LA Galaxy II, securing a 3-1 victory over its USL Championship League rival. Rising, now playing their second season on Community land, are looking to build off last year’s successful playoff run.

A season ago, Rising racked up an impressive 20 wins against five losses. The team’s run was halted last November, when they were defeated by the Rio Grande FC Toros in the conference championship game, falling 4-3 on penalty kicks.

Thanks to Phoenix Rising midfielder’s Luis Seijas’s two goals and Marcus Epps’ single goal, the home team was able to give themselves some space heading into the final moments of the game.

LA Galaxy II would sneak a goal past the Phoenix Rising goalkeeper Ben Lundt to put them on the board. But the visiting team would get no closer, as Rising dominated the ball for most of the game.

Looking ahead for the season, Phoenix Rising plans to host another Indigenous Peoples Night on October 10, a day before the national day recognizing Indigenous peoples. According to Jason Minnick, Phoenix Rising Director of Marketing and Communications, the team has reached out to Community artist Paul Molina from District 7 to design a commemorative scarf for the special occasion.

For Community members who would like to attend a game, Phoenix Rising has a special offer available throughout the season for 25 percent off tickets. Simply insert GRICRISING when purchasing tickets online. 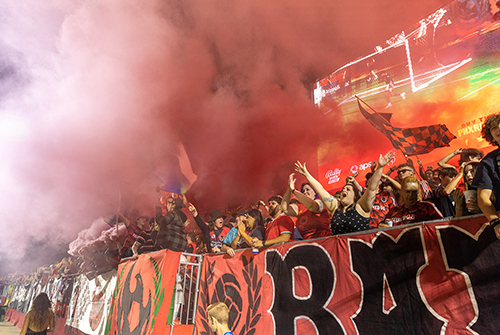