During the late 1960’s, the construction of the New Gila River Arts & Crafts Center had begun in Vah-Ki District. In the September, 1968 issue of the Gila River News, there is mention of the Center under construction. Every community member whom passed by the construction site witnessed the Center going up.  We often passed by on Casa Blanca Road to visit family in Casa Blanca.  Construction was completed in March of 1970.  By then, the staff were hired and they began to set up shop, designed exhibits, purchased items to sell, etc.  On March 10, 1971, the Arts & Crafts Center held its Grand Opening.  Jerold “Jerry” L. Collins was the first Director hired by the community.  Other Directors included Bruce Hamana and John Long (last Director).

The Interpretation of the Architecture is representative of a Western Diamondback Rattlesnake, Crotalus atrox, coiled up with its rattle sticking up.  I recall, that it was an indirect reference to nearby Rattlesnake Hill, just due west of the site.  The hill is still an active hibernation den for rattlesnakes and youth are warned to stay away from the area (personal experience). Its circular form is also representative of a circle, as Akimel O’otham and Pee-Posh dance in circles.  It also represents the annual cycle of life.  This is what the tour guides explained to non-Tribal visitors over the years. This information was related during school field trips by staff Tour Guides.

Throughout my life-time, I often visited the Arts & Crafts Center and witnessed its evolution.  The interior construction consisted of large areas with heavy timber beam rafters and support columns.  It may have been representative of an Indian “Kiva,” anything “Tribal” had been incorporated into the over-all “Theme.”  Inside the main floor stood the different “Sections” right away one noticed the large, glass jewelry case on the south wall. Inside the cases were silver necklaces and bracelets from different Tribes, mainly, Navajo, Zuni and Hopi. On the wall behind the case hung Concho-belts, shelves with kachina dolls, carvings and Apache pine-pitch burden baskets, all for sale. Signage proclaimed all merchandise to be ‘Authentic Indian Made.’

Arranged on the main floor stood different shaped hardwood stands. Each were dedicated to different items like Maricopa (Pee-Posh) Pottery, Pueblo Pottery, O’otham Baskets, Navajo rugs and artwork from different Tribal Artist’s hung throughout the Museum.  There was a balcony with staircase that led up to the second floor where more Navajo rugs and other painting had hung. All the paintings and watercolors had price tags on them with Artist’s signatures.

In the Museum areas stood the different exhibits.  I recall, the Ha:l Hiosig exhibit had been dedicated to the late Isabel Johns and featured her series of squash blossom basketry.  There was a small diorama with cattails, bundles of willow, devil’s claw “hats” and a homtha (granary basket) she had woven for display purposes. The stoneware exhibit contained grinding stones, ancient pottery and of all things, a partial mammoth tusk that was excavated at Gila River Sand & Gravel during quarry operations.  The Pima Home exhibit featured a rectangle-shaped structure made of mesquite timber beams, arrow-weed and covered with dried mud.  Inside and out lain household items normally used on a day to day basis. All exhibits were well-lit.

The Giho ‘Burden-Basket’ exhibit featured an O’otham woman ‘mannequin’ who worn an O’otham dress, carried an authentic Giho with head-strap and clutched the helping-stick in her hands.  I recall, that local school kids whom visited the center during field trips, had been afraid of the Burden-Basket Lady because of her gleaming dark, glass-eyes (heard from students).

During the winter of 1978-1979, I helped excavate the Sanitation Lagoon situated just to the north of the center.  Our Heavy Equipment Operation and Maintenance class students, designed the lagoon, shot the elevations with a transit and begun the excavation process with bull dozers.  We began in the fall, broke for Christmas Break, and finished upon our return to campus. The lagoon was brought on-line a short time thereafter. That was when the Career Center Campus was in operation at Sacaton.

We had heavy equipment students from the different Tribes, Navajo, Hopi, Zuni, etc.  The The old center buildings are still in use today by CRMP and other Departments.

As in all endeavors, everything didn’t happen all at once.  As the years passed by, more exhibits were developed along with text panels. During the mid-1980’s, the Heritage Park had been opened and Alan Kite was the Project Director (signage text). It show-cased a Pima village, Papago village, Maricopa (Pee-Posh) village, Hohokam village and Apache Camp. Each had a text panel with illustrations of each land-use areas. A large outdoor pavilion was constructed to host large events such as Artist’s Demonstrations, Dance Groups from different Tribes and the Annual Anniversary Events (I went to a few, but not all).

As in all organizations staff come and go.  We often stopped by to visit friends and relatives whom worked there over the years.  These are only a portion of my personal reflections. Other community members retain specific memories of the Arts & Crafts Center during its hey-day. One notable O’otham is Robert Stone, former Lieutenant Governor, he operated the Farmer’s Market when it was in existence (we bought fresh produce there).  Belinda Nelson, she used to demonstrate basketry for the school kids and visitors.  Melanie Pedro, she is featured in the last brochure (I retain a hard copy).  I also remember, the late Connie Walker (D-4), who supervised the restaurant cooks and waitresses. Walker Road in Goodyear village is named after the family.

On January 12, 2009, I attended the Gila River Arts & Crafts Center Public Hearing, which was held inside the old Skyline Gym at Casa Blanca.  The hearing was presented by the development team from various GRIC Departments. The old Economic Development Department hosted the event. Other participants included staff from Land Use Planning & Zoning, D-5 Council Representatives, Skyline school staff and 14 Community Members from the different Districts.  The layout of the planned Commerce Center had been unveiled and plans announced for the different outlets.

It was well presented, but budget issues curtailed its further development. In Closing: The Annual Winter Bird Count is hosted by the Department of Environmental Quality. Started in 1998 to enumerate the different species of birds wintering or passing through our community.  We started the day with ‘in-the-field’ enumeration and ended the day with a hot meal inside the large dining hall. The different groups had given their reports of the bird counts within their assigned areas. When the Gila River Arts & Crafts Center-Heritage Park closed, the Culture Event moved to HHC Court-Yard.  Most of the inventory is currently stored inside the HHC Repository. According to the current Architect’s Renderings, the future looks bright. 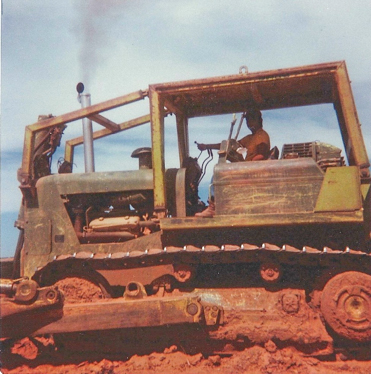 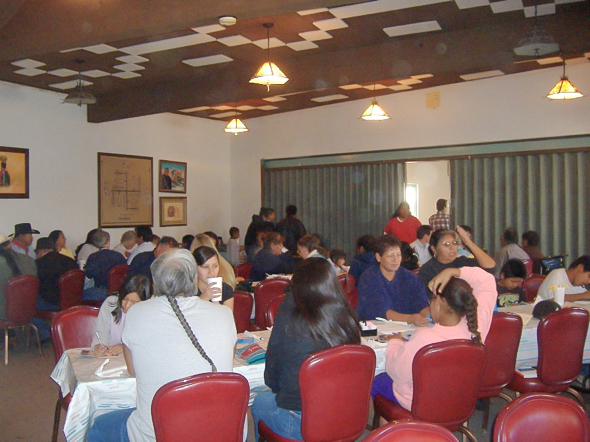 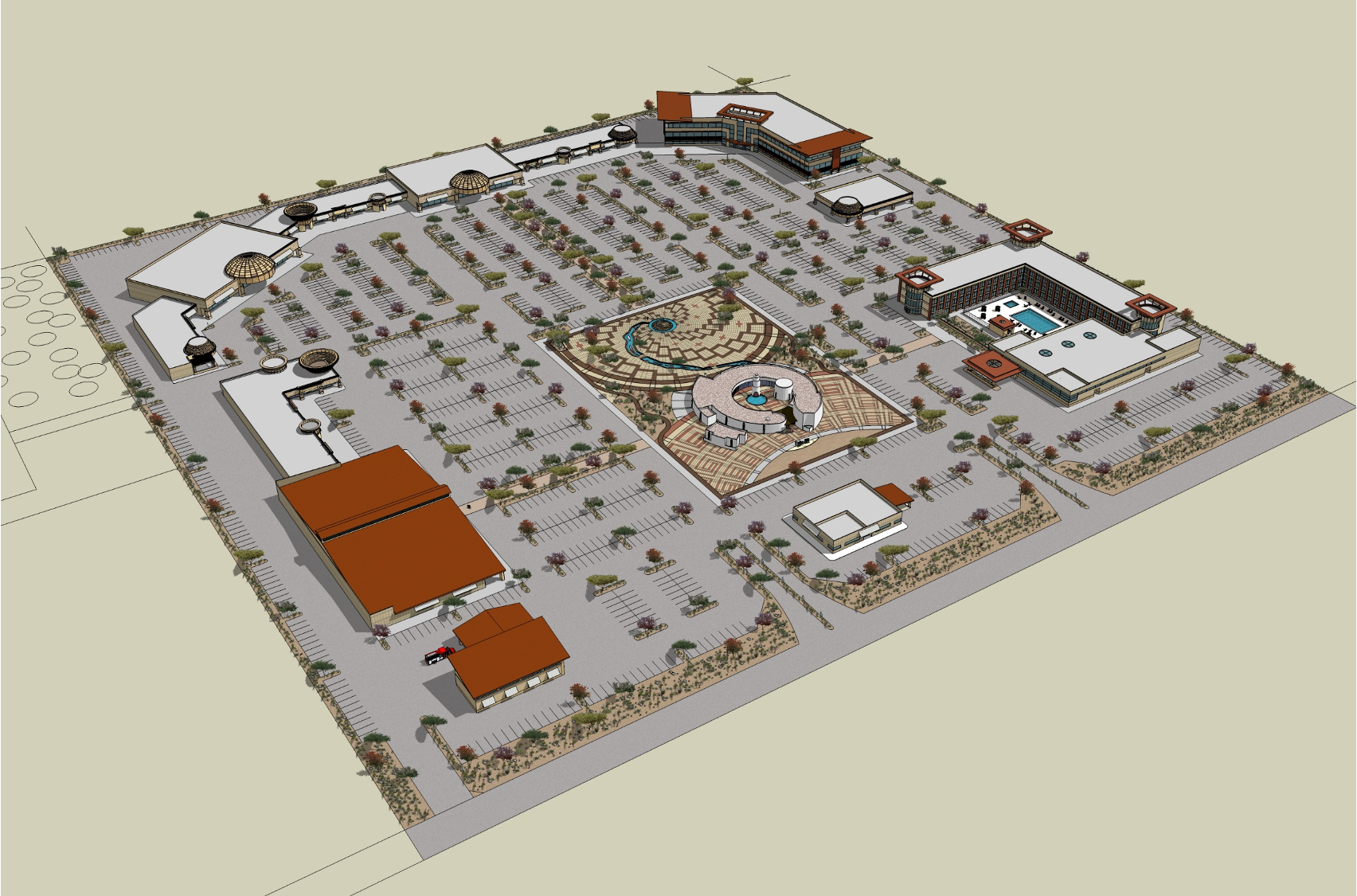