The Gila River Arts and Crafts Center building, a historic yet dilapidated structure in the Gila River Indian Community’s District 5 off the I-10 and Casa Blanca Road, began demolishment on Jan. 14 to make way for new developments on the 40-acre lot.

Constructed in 1970 using federal funds, the building was home to the nonprofit Gila River Arts and Crafts Corporation Inc. It was formed to operate the Gila River Arts and Crafts Center, which featured a restaurant offering fry bread and other traditional dishes; a gift shop featuring pottery, basketry and jewelry from local artists; and the Community’s first museum, which shared the history of the Akimel O’otham and Pee-Posh.

In addition to employing Community members, the center had an outdoor patio and banquet rooms and became a gathering place for various events throughout the years.

The center closed in 2007 and the museum was transferred to the Huhugam Heritage Center. The building had been vacant ever since and suffered structural damage and vandalism.

The new development will include a big box store, convention center, hotel, and retail spaces for Community members. It also will include historic monuments honoring U.S. Marine Ira Hayes, who served in World War II and was immortalized in the iconic photograph “Raising the Flag on Iwo Jima” by photographer Joe Rosenthal, and survivors of the Japanese Internment camp, located in District 5.

Nichole Roderick, Project Administrator for District 5, along with District 5 Councilmembers Brian Davis Sr. and Wahlean Riggs, witnessed the building’s demolition. Roderick recalled growing up and attending events such as crown dancing at the center, which also featured traditional singing, dancing and craft demonstrations for visitors.

Davis and Riggs recognized fellow District 5 Councilmembers Marlin Dixon and James De La Rosa along with past and present Community leaders and elders for their support and efforts on the Project.

Riggs shared how former leaders in the Community began the work to develop the center in 1968. Two years later, the building was finished and open to the public.

“Since then, the Gila River Arts & Crafts has meant so much to the people here of District 5,” said Riggs.

Davis spoke about his time over the years gathering with fellow Community members for events and meetings at the center. “It was a great place to meet, great food to eat and great people to meet as well,” he said.

Davis also recalled that ancestors and survivors of the 1942-45 Japanese Internment Camp would visit the center and share stories with the Community.

As the old building was being torn down, many people driving by stopped to take photos.

“It’s a sad occasion for the members, but we are planning to rebuild,” said Riggs. 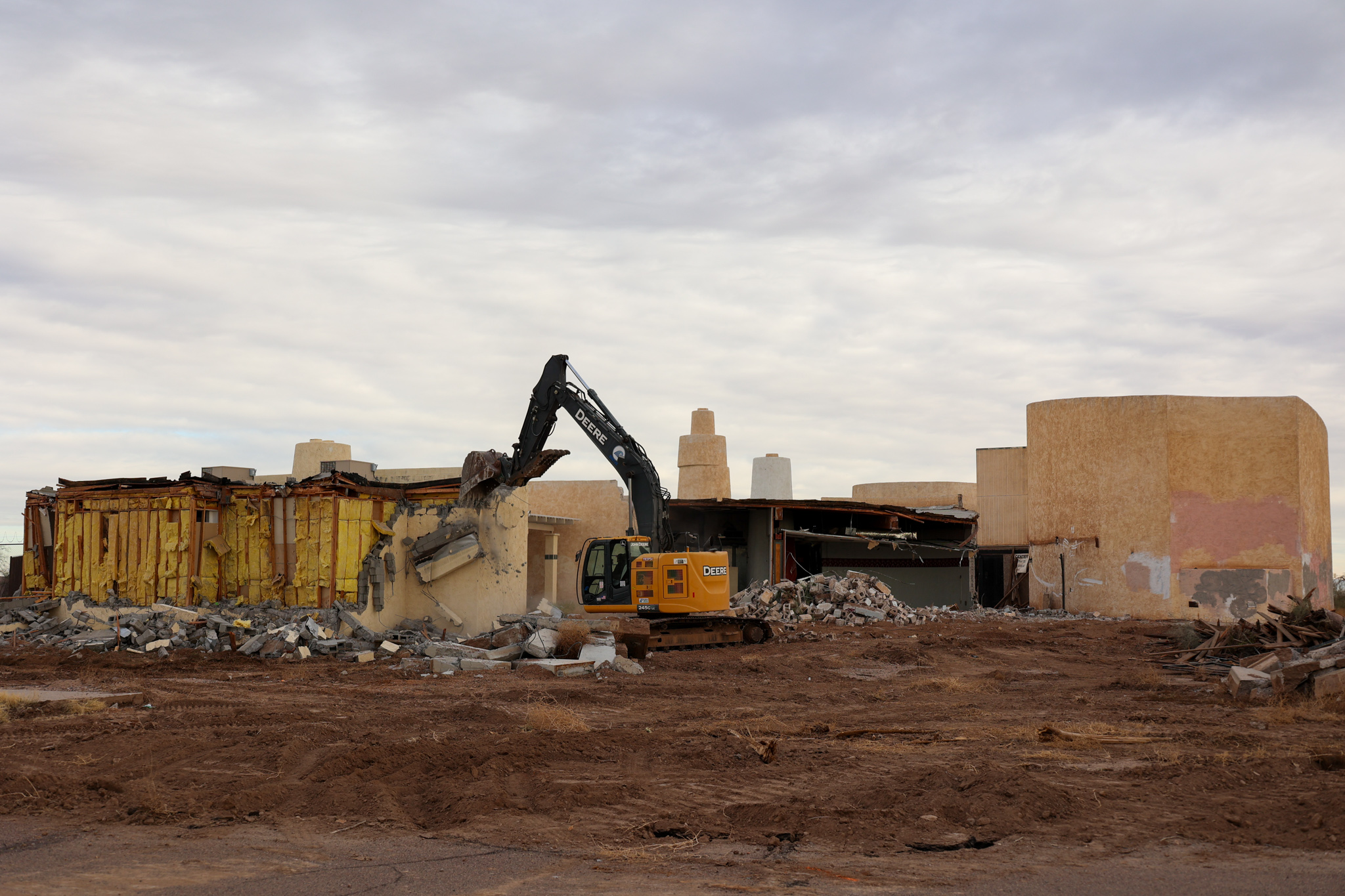