After 2021’s significant monsoon activity, the Gila River Indian Community is bracing for another season of storms with heavy rain, wind and lightning. This year’s preparation is not just about being safe when the moment comes, but planning ahead to avoid serious potential hazards.

The Office of Emergency Management (OEM) has been conducting Monsoon Prep training with departments and programs ahead of the upcoming storm season to review last year’s impacts and how departments can continue to support one another in emergency situations.

With major storms last year and similar expectations for Arizona in 2022, OEM has been busy with trainings and pushing out information across the Community.

Adam Sainz, Emergency Management Coordinator, said the Monsoon Prep trainings are designed to prepare GRIC departments and personnel for monsoon season. These efforts include: to prepare and maintain equipment and resources; having the ability to open, manage and maintain an emergency shelter within the service centers; and to utilize OEM’s storm damage process in a timely manner for repairs and recovery.

During trainings, Sainz uses visuals to illustrate the level of a severe storm’s damage with slides showing downed power lines and significant damage in residential areas. One slide showed an AC unit lying in the front yard of a residence after being blown off the roof by high winds. Another slide showed a house with major roof damage for one displaced Community member.

The preparedness activities have already begun with education and outreach, weather reports and increasing water supplies. Sainz also reported that OEM remains in a state of readiness with equipment for emergencies such as  trash pumps, AC units, misters, generators, and other resources such as sand bags.

Gila River Indian Community Utility Authority worked round the clock to get power up for customers. Community Services Department opened emergency shelters at the district service centers for families. And once those filled, the Community provided hotel rooms for others including elders and those with disabilities and health conditions.

A July 10 Press Release from the Communications & Public Affairs Office described the level of damage from the extreme weather: “The storm—which caused damage described as catastrophic in some places—represents an all hands on deck situation for our emergency services teams, utility crews, public safety workers, health care workers and providers and providers of emergency shelter.”

The concern level reached the pocket book as well. Those needing assistance applied for the Community Temporary Emergency Relief program, which was set up to reimburse families for out-of-pocket costs.

The damage was widespread across Districts 1-5. Broken power poles, flooded roadways, damaged homes showed the aftermath of one of the most harmful storms to hit the Community in years.

OEM’s monsoon training reviewed last year’s damages to remind departments of what is possible when a major storm hits.

While the Community dealt with storm damage and assisting members with shelter and hardship, COVID-19 was still prevalent. Governor’s COVID-19 Taskforce had just issued a Health Alert the day of the storm on July 9 to address the rising number of Delta variant cases spreading among unvaccinated GRIC residents. Addressing power outages and other needs had to be done with the pandemic in mind and the public safety measures in Gov. Lewis’ Executive Orders.

The Community canceled a Mobile Vaccine Unit event in District 1 that was scheduled for July 10 while power was under restoration.

The added element of increasing positive cases in GRIC factored into the emergency response plan from the storm.

“The difficulty to follow COVID protocols in emergency shelters was very challenging. Our district coordinators were able to provide PPE and sanitation supplies to minimize the spread of the virus. The Tribal Health Department also assisted with their recommendation and efforts to also minimize the spread and to keep people safe,” said Sainz.

Cases have decreased after the Omicron surge peaked in January 2022, however, cases have started to increase in May. The Community is watching for potential surges on the horizon. The COVID-19 Taskforce is looking cautiously at another possible rise in cases by the fall due to the Omicron subvariant BA.2.

Over 3,600 total GRIC residents have yet to receive a vaccine as of May 9, which makes a large number of people vulnerable to another surge. With widespread availability of vaccines and testing, the Taskforce continues to promote vaccines in the Community to save lives and stop the spread of COVID-19.

Fast forward a year and Arizona is predicted to have another very active monsoon season. The National Weather Service in Phoenix is saying that rainfall will be near or above-average this monsoon season, which starts June 15 and ends Sept. 30.

Sainz said he’s received good feedback on the trainings and he feels confident regarding the level of preparedness from all attendees.

“The departments and districts understand the importance of preparing the community for the treacherous monsoon storms we potentially encounter. In doing so, this will always reduce the impacts within their districts and the Community,” said Sainz.

OEM will continue to promote monsoon safety with the official start of the monsoon season beginning next month by providing information to Community members.

“We will be at each service center discussing and providing information on how to be prepared at home as well as safety measures to follow in the event of a power outage and/or flooding,” said Sainz.

In addition, OEM has added new members to their Team to assist with emergency response and recovery activities. The Team stands ready and have been working diligently to cover all aspects of preparedness as monsoon season approaches. 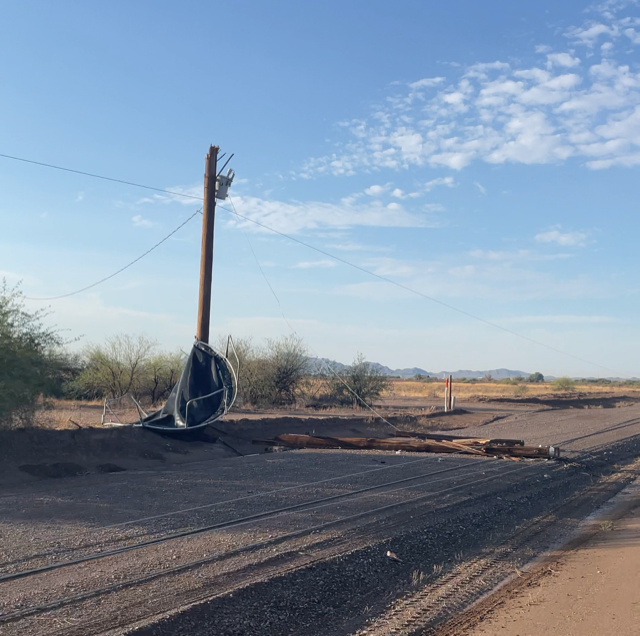 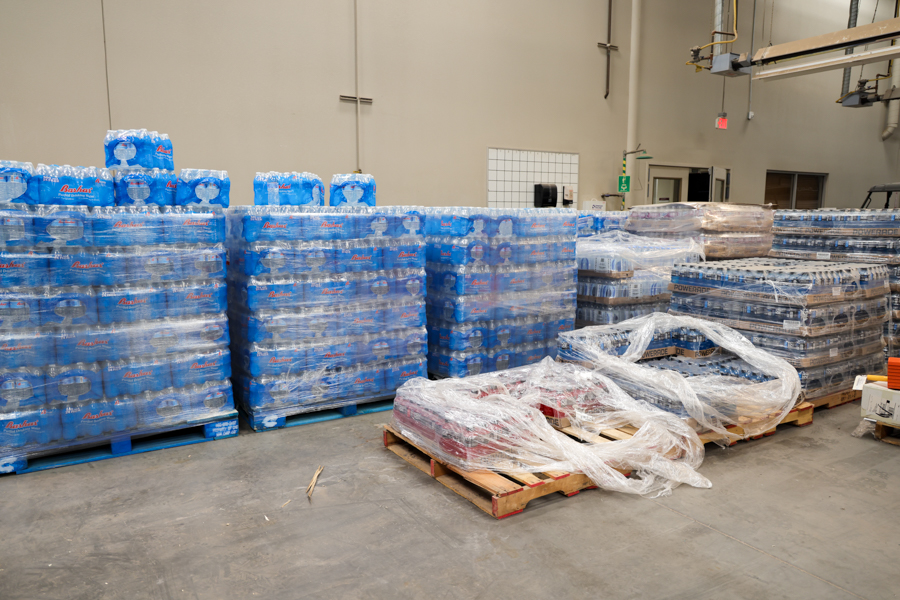 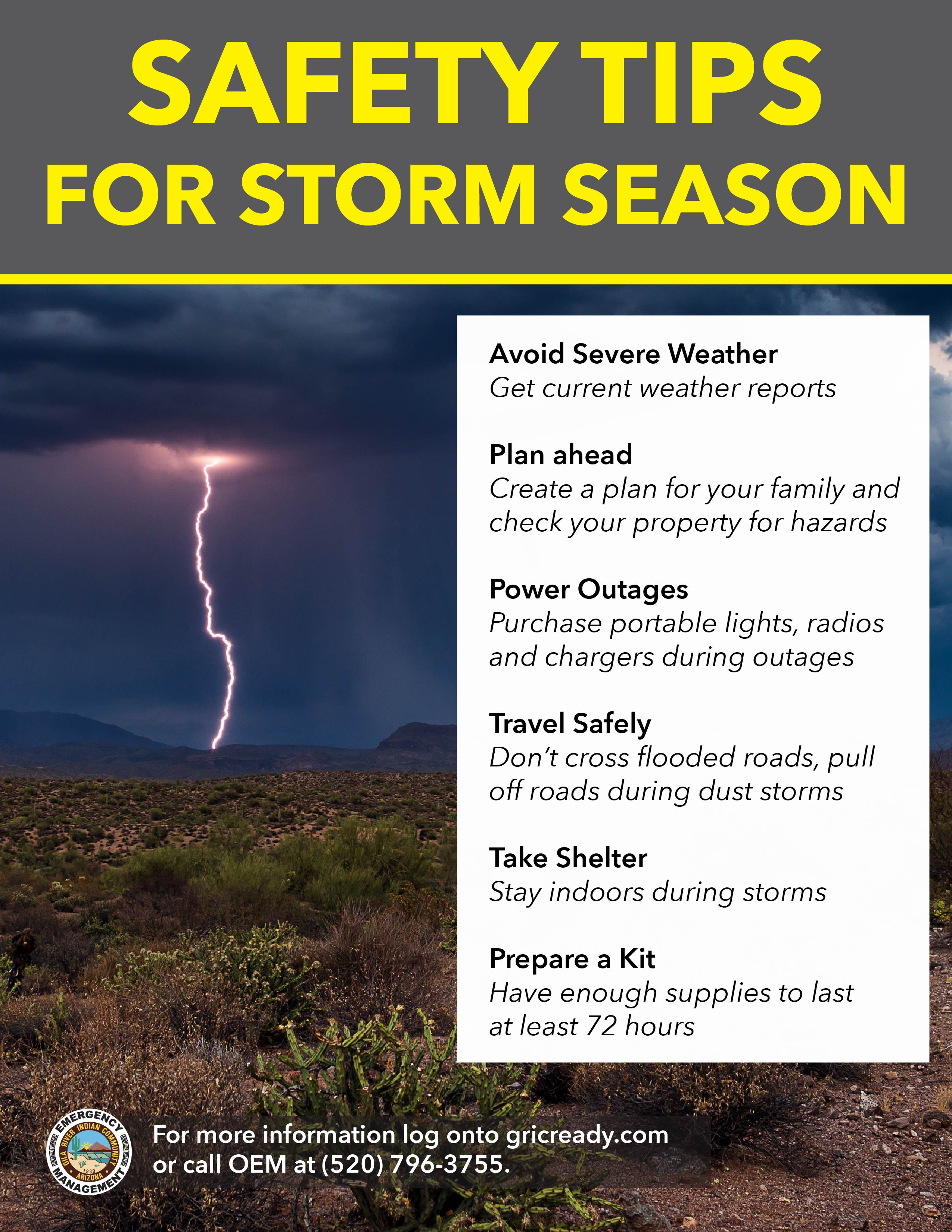